A little off base: Recalling a little-known tragedy 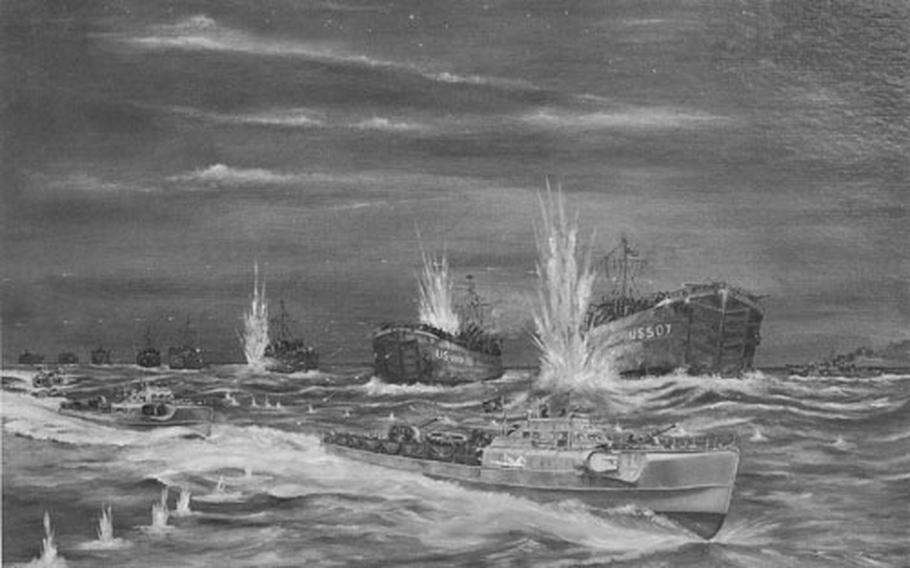 RAF MILDENHALL &#8212; For decades, few people other than the survivors of the freezing waters off the coast of Slapton Sands knew how 749 men died in one of the worst American training disasters of World War II.

Performed in the dead of night April 28, 1944, the thwarted D-Day practice run was kept secret by the military to keep information out of German hands, and witnesses were told to keep it quiet.

Dubbed Exercise Tiger, the maneuver was a mock invasion of Utah Beach at Normandy, France, using thousands of troops, naval assets and live ammunition aimed at a tiny, evacuated town on the south England coast.

But before the landings could start, German fast attack boats emerged and torpedoed the unprotected troop and tank carriers. Within an hour, the military had a massive disaster on its hands and hundreds of men were in the water, hoping for rescue.

Today, near the spot where the invasion fleet was supposed to come ashore, one of the lesser-known military monuments erected for American GIs and sailors stands overlooking a beach near the village of Slapton Sands.

The monument includes a set of plaques arranged around a Sherman tank lost in the attack and raised from the seabed in 1984 by Exercise Tiger enthusiast Ken Small. The memorial has a small but dedicated group of caretakers who this year are raising funds to improve the site.

On Sunday, almost 64 years to the day after the catastrophe, members of the Slapton Sands Memorial Tank group held its annual commemorative service at a nearby church in Stokenham, followed by a wreath-laying ceremony at the tank site, said John Casson, an organizer for the group.

The service came at the start of a fundraising drive to gather about 100,000 pounds in donations to add a new element to the tank site, Casson said.

In all, more than 900 men were killed during Exercise Tiger, including the 749 who were killed in the German torpedo attack in the early-morning hours of April 28, Casson said.

According to accounts of the attack and survivors&#8217; stories, it was a hellish experience for men &#8212; supposed to be on a dry run for D-Day &#8212; who were killed in the raid, many of them by the icy waters of the English Channel.

Crapanzano, like many others, had to abandon his tank landing ship (LST) after it was hit, and saw many men succumb to the freezing water. Others died in the torpedo explosions, or were drowned with LST-531 when it was hit by torpedoes and sank in just a few minutes.

Included in that group was Sgt. Louis Archer Bolton, whose niece, Laurie Bolton, was in Slapton on Sunday for the ceremony.

Few men made it out of the LST before it sank. Bolton was not among them.

The loss was hard on the family because the Army listed Bolton only as &#8220;missing,&#8221; then later said he was killed in the English Channel.

She said the lack of closure was hard on Louis&#8217; mother.

&#8220;For many years my grandma had hope,&#8221; thinking maybe the Germans had made her son a prisoner, Bolton said.

It was only at the 50th anniversary of Exercise Tiger, when news networks covered the story, that the family realized that&#8217;s where the sergeant had been killed, she said.

These days, the memorial receives a steady trickle of visitors throughout the year, occasionally including survivors of the operation and their family members. One of the German E-boat commanders involved in the attack even visited once, Casson said.

For Bolton, if offers a chance to visit the closest thing her family has to a marker for her uncle.