A little off base: Newmarket nights 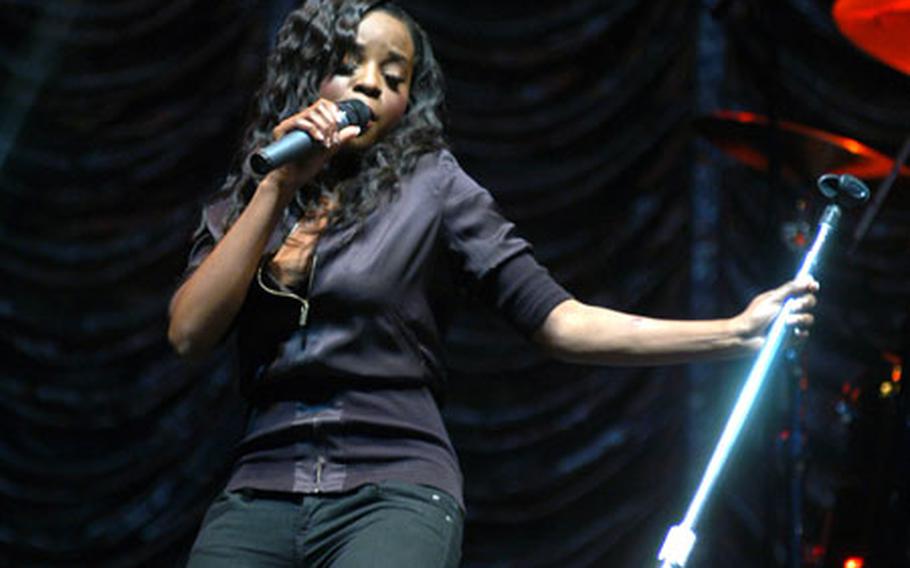 Keisha Buchanan, from the Sugababes, uses a mic stand as a prop while singing "Round Round" during a Newmarket Nights event in June. (Sean Kimmons / S&S)

Keisha Buchanan, from the Sugababes, uses a mic stand as a prop while singing "Round Round" during a Newmarket Nights event in June. (Sean Kimmons / S&S) 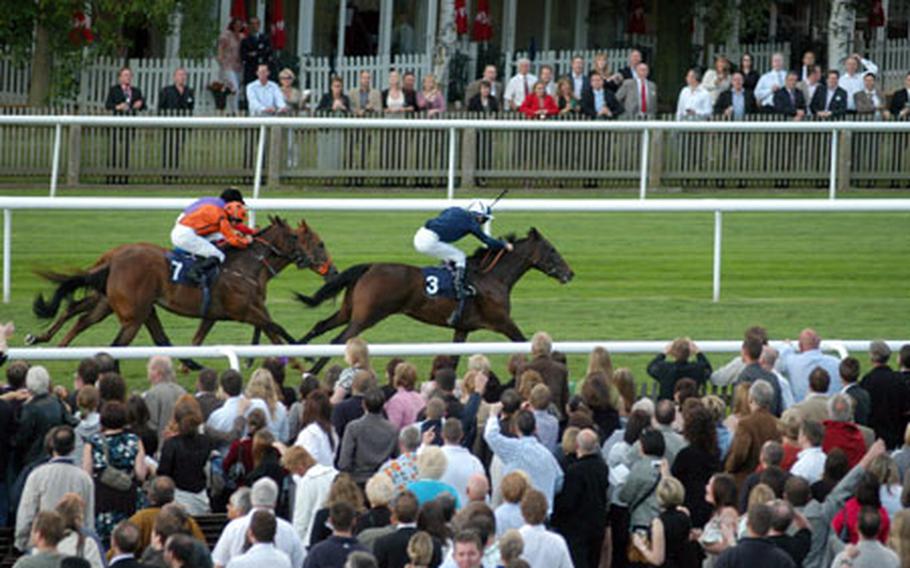 Gloved Hand (3) grabs the lead on her way to winning the fifth race, consisting of fillies and mares, on a recent Newmarket Nights event. (Sean Kimmons / S&S) 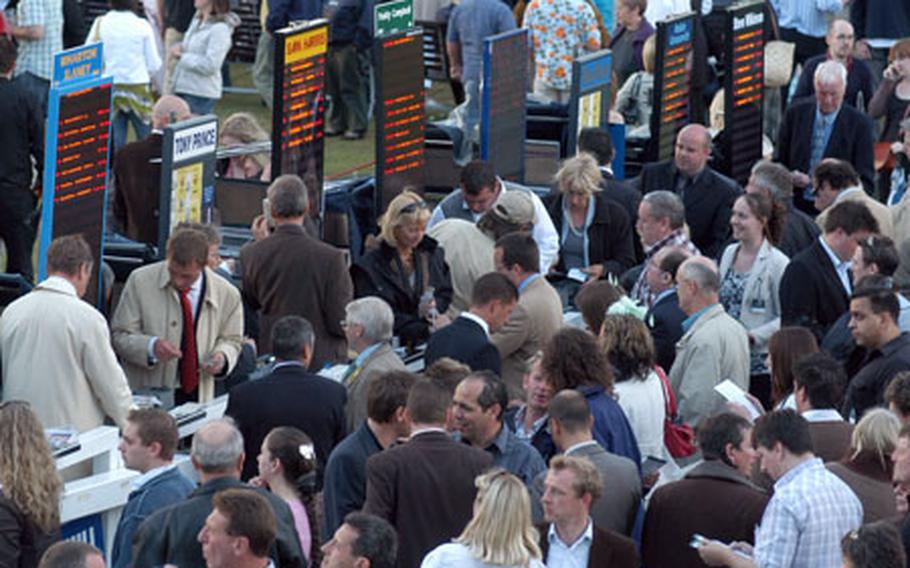 Spectators line up to place bets on the next race. (Sean Kimmons / S&S) 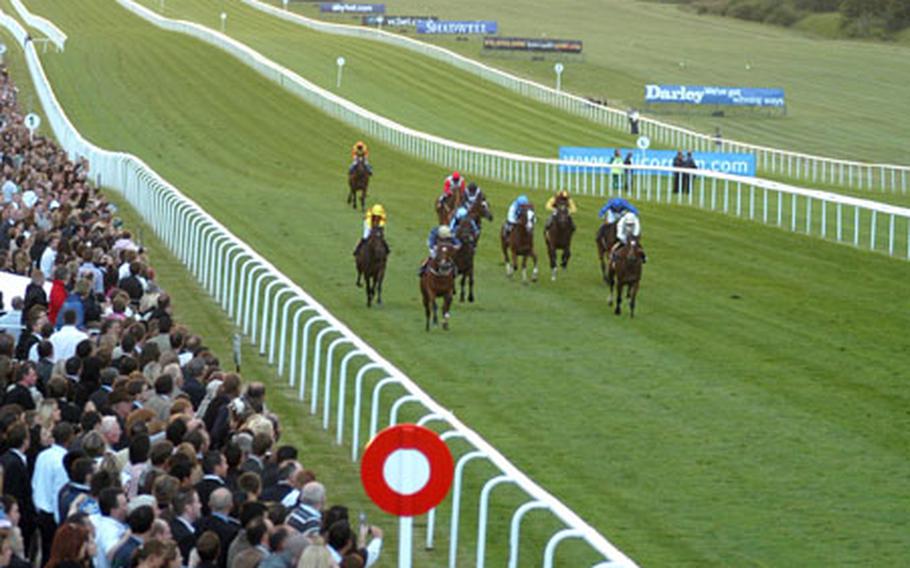 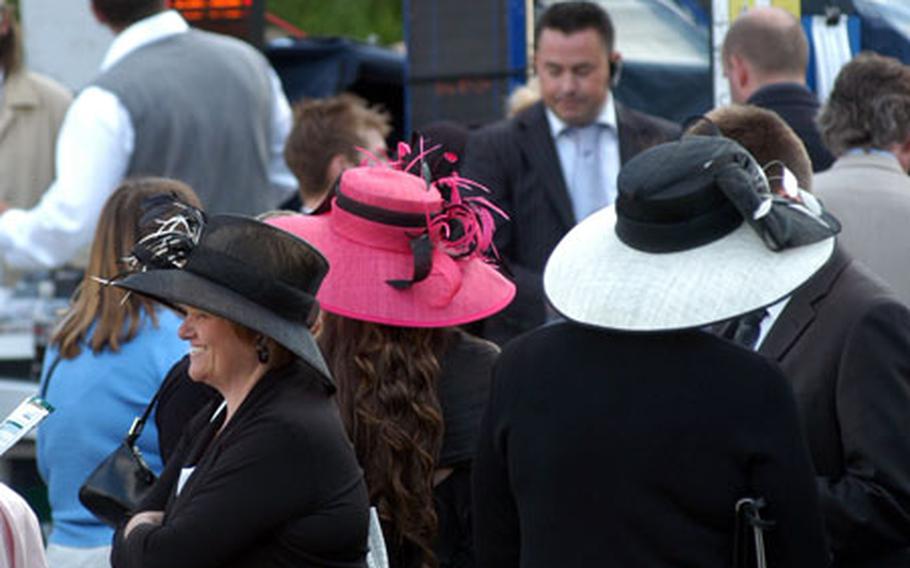 Many women could be seen wearing their fancy hats and dresses to a recent Newmarket Nights event. (Sean Kimmons / S&S)

NEWMARKET &#8212; Roughly 12,000 spectators gradually besieged a stage, with some squeezing past others for a better view of the multiple-platinum-album girl band.

Eyes were kept on the stage and every time a roadie appeared from backstage, gasps from the anxious crowd could be heard. Then, just as the masses began to get impatient, an emcee introduced the Sugababes who broke into one of their hit songs, &#8220;Red Dress.&#8221; Deafening cheers, as well as screams from young girls, erupted from the crowd as the concert got under way.

Only a half-hour before, the crowd &#8212; from teenyboppers to wrinkly old men &#8212; focused their attention toward the grassy racecourse behind them, where purebred racehorses fought for every furlong to the finish line.

The horses and the Sugababes entertained them all as part of Newmarket Nights, a summerlong horse racing event capped off with a live music performance held at the city&#8217;s July Course on Fridays.

The next available concert is July 27 when the Pet Shop Boys will be showcased. The band Madness is set to perform July 20, but the concert has already sold out.

Adult tickets for each event range from 12 to 32 pounds.

Excitement filled the grandstands every time the horses, as many as 16 in one race, galloped past loud bettors cheering on their short-term investment. In between races, novice to expert bettors studied the racing program to gauge which horse would come out victorious in the next one.

Could Pusey Street Lady or Diamond Diva outdo the competition in the fifth race of fillies and mares? Neither. It would be Gloved Hand winning.

Bets on the races could be made at numerous betting stands in an area between the grandstands and racecourse. The minimum bet was 2 pounds and it looked as if there wasn&#8217;t a maximum bet.

Hussey described Newmarket Nights as a &#8220;nice social event&#8221; that gives some people an excuse to dress to impress.

So, if you have a fancy hat and dress or a three-piece suit collecting dust in the closet, wear it to Newmarket. Those not up for putting on their Sunday best shouldn&#8217;t be discouraged, though, since many spectators wore jeans and T-shirts as well.

All events include a few hours of horse racing before the concert. Adult prices vary from 12 to 32 pounds. Limited child admission wristbands are available for 5 pounds each. Only two child wristbands are allocated per adult.