A Little Off Base: More work than play at London’s toy fair 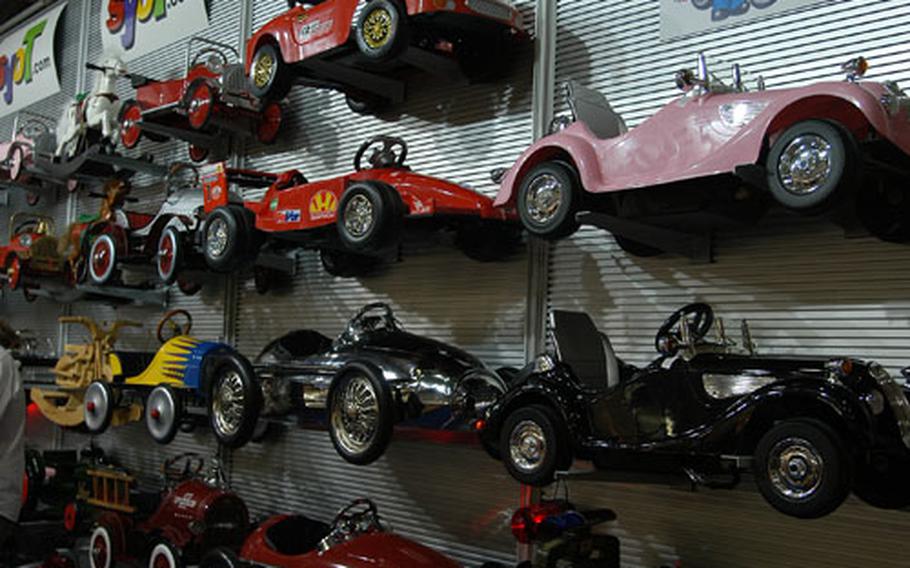 A wall of vehicles built for children at the Syot.com stand at the London Toy Fair. (Bryan Mitchell / S&S)

A wall of vehicles built for children at the Syot.com stand at the London Toy Fair. (Bryan Mitchell / S&S) Just one of the many forms a set of Wedgits building blocks can take. (Bryan Mitchell / S&S) 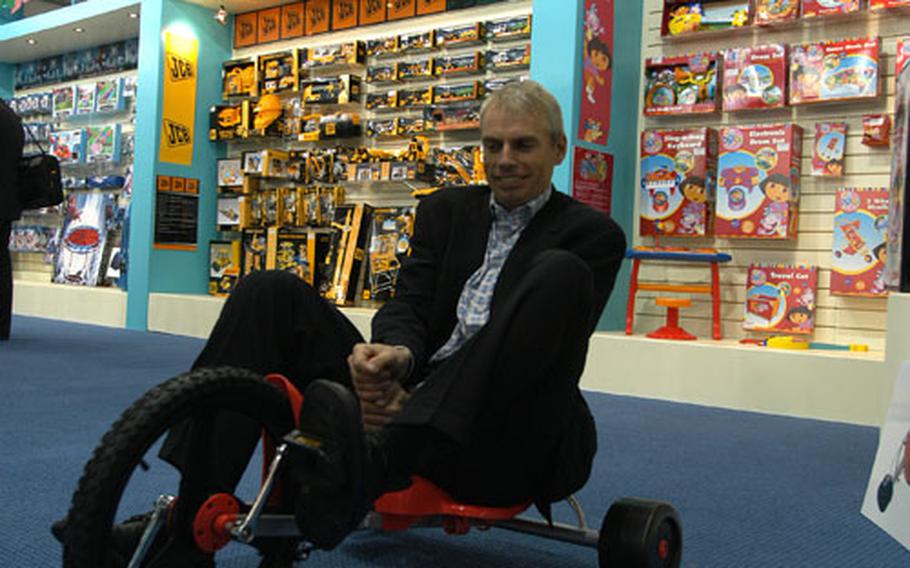 LONDON &#8212; While the luster might remain on nearly month-old Christmas toys, manufacturers are already bidding for a spot under the 2007 tree.

Hundreds of toy companies from around the globe packed into London&#8217;s ExCel exhibition and conference center last week for a chance to show off their goods at the annual British Toy & Hobby Association Toy Fair.

Along with the established popular brands, a handful of toys were presented that might not be found in the local Army and Air Force Exchange Service store, but might still prove worthy of a child&#8217;s attention.

One of the new products that showed promise was the G Force go-cart. The G Force merges the technology of a 1980s-style Big Wheel with a bicycle, steered by an airplane joystick.

German designer Tim Kremer said the rear-wheel drive means the G Force is built to turn sharp corners and make an art form of skidding out.

The 17-pound, collapsible G Force will retail for roughly $99 and is expected to hit stores worldwide in March.

For all the flashy new toys, futuristic video games and Hollywood-generated products, one of the most impressive products on hand stood out for its simplicity.

Wedgits is the brainchild of California entrepreneur Rock McKinley, who has traveled the world for the last decade with his children introducing the building blocks to educators and toy enthusiasts alike.

The blocks come in the shape of a pyramid, but can be rebuilt, reformed and restacked into a limitless number of shapes. Due to the unique shape of the blocks, they always fit together no matter how small or large the pieces.

While toys ostensibly are made for children, there were only a handful at the Toy Fair&#8217;s opening day.

The youngsters were heavily outnumbered by adult inventors, designers, corporate honchos and public relations specialists all vying for the attention of retailers, wholesalers and journalists.

Many of the established brands &#8212; Lego, Thomas the Train, Hasbro and VTech &#8212; boasted elaborate venues with multi-media demonstrations, cake and juice celebrations and well-dressed executives eager to tout their products.

Vendors asked for multiple forms of ID to ensure journalists were not rival toy manufacturers with an eye for stealing ideas.

&#8220;Coming up with new toy ideas is very difficult, and people work hard to protect their ideas,&#8221; said tp toys representative Dominic Lewis-Barclay, whose firm introduced the Spiro Hop &#8212; a fusion of a teeter-totter and a merry-go-round &#8212; at the London toy fair.

Along with vendors from around the world, two Cambridge-based entrepreneurs also were pitching their wares.

Andrew Sheerin and Andy Tompkins are the inventors of the boardgame &#8220;War on Terror,&#8221; which was featured in Stars and Stripes in 2006. After the duo was turned down for a stand at the toy fair, they set up the game and played a round in the ExCel visitor&#8217;s hall.