A Little Off Base: Morbid exhibits paint a dark picture of London history 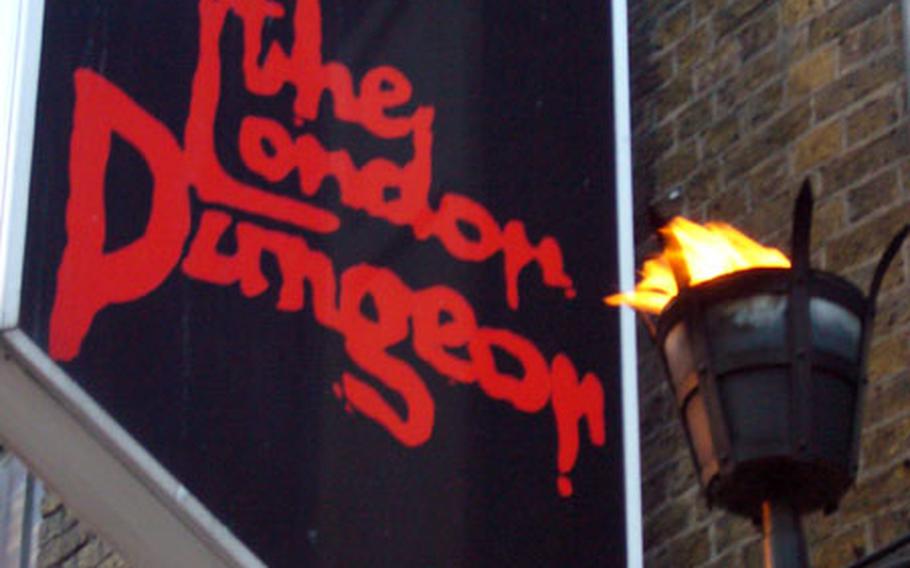 The London Dungeon&#39;s sign helps set the mood for the attraction that highlight&#39;s London&#39;s gruesome past. (Sean Kimmons / S&S)

Well, if you like entering ominous buildings with who-knows-what lurking about, then the London Dungeon is for you. Next to the Underground&#8217;s London Bridge station, the dungeon offers a glimpse into the gruesome side of this city&#8217;s history.

The morbid exhibits, some of them interactive, include the Great Plague of 1665, Great Fire of London in 1666, Jack the Ripper and torture methods of yesteryear.

The exhibits attempt to frighten visitors but mainly serve as an informative tour, delving into the city&#8217;s darkest times. Some of the actors can be amusing at times, especially to those who enjoy dark comedy.

There are a few things that could startle anyone. I won&#8217;t give them away, but pay close attention while you&#8217;re at the Sweeney Todd exhibit.

Back in the 18th century, the story goes, Todd owned an ordinary-looking barbershop along Fleet Street. When a patron sat in his barber&#8217;s chair, however, he&#8217;d pull a lever to pivot the chair and dump the patron through a trap door.

After killing the patron, his culinary-minded wife would use the flesh to make meat pies. Overall, the couple was responsible for the deaths of more than 160 people, according to the dungeon&#8217;s guide, although experts say it&#8217;s unclear whether Todd actually existed.

Another daunting attraction is a short boat ride called Traitor! Boat Ride to Hell. The concept of the ride comes from London&#8217;s Newgate prison, where many executions were carried out in the 1700s, the guide stated.

History gurus may be interested in an exhibit based on Jack the Ripper, the infamous serial killer who prowled London&#8217;s East End during the 1880s. A tour guide and a video explain, in detail, about the five women he sliced open and those who are suspected of being the killer.

Advertisements for the dungeon, plus a guide that you can purchase at the front, can be a little deceiving. People in the photos look as if they&#8217;re scared to death, which probably won&#8217;t happen to you.

One thing that is definitely scary about the dungeon is its admission, almost 17 pounds for an adult. Still, the dungeon is an entertaining journey through London history.

Getting thereLocation: 28-34 Tooley St. in London, right next to the Underground&#8217;s London Bridge station along the Northern and Jubilee lines.

For more information, check out the dungeon&#8217;s Web site at http://www.thedungeons.com.