A little off base: Mildenhall Stadium 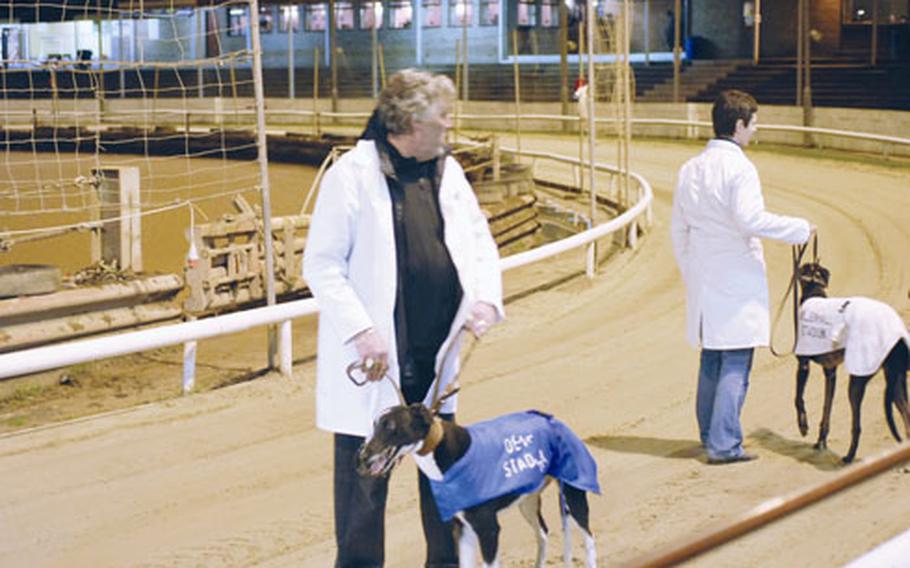 Buy Photo
Trainers prepare their dogs for a greyhound race. The races, on Tuesday and Friday nights, draw crowds of up to several hundred people. (Photos by Mark Abramson/Stars and Stripes)

Buy Photo
Trainers prepare their dogs for a greyhound race. The races, on Tuesday and Friday nights, draw crowds of up to several hundred people. (Photos by Mark Abramson/Stars and Stripes) 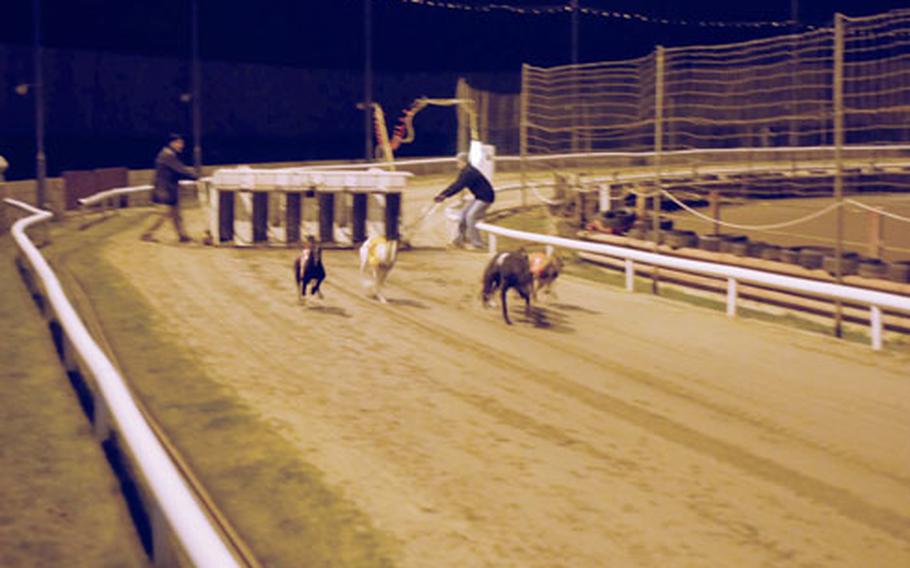 Greyhounds race down the track. () Bettors and spectators look on as greyhounds race down the track at Mildenhall Stadium. The stadium has been entertaining dog race lovers and crowds who show up for stock car and motorcycle races since the 1970s. ()

One doesn&#8217;t have to wander far from base to spend a night at the races.

Mildenhall Stadium is just a stone&#8217;s throw from RAF Mildenhall and RAF Lakenheath down a dusty road in the village of West Row. The stadium has been drawing crowds since the 1970s. Now it has year-round greyhound races with 12 contests every Tuesday and Friday night, demolition derby-style car races, which started Saturday, through the end of October, and motorcycle racing.

Brothers Dave and Ron Coventry bought the stadium in July and are trying to draw more Americans by offering free admission to the dog races for anyone with a Department of Defense identification card. More Americans show up for the car races than the dog races, Dave Coventry said.

Crowds for the stock cars, which are in no-way like NASCAR vehicles that Americans associate with the term "stock car," typically range from 1,200 to 5,000 people, Coventry said.

He compared the stock car races to demolition derby in America. He and his brother promoted the car races at Mildenhall Stadium before they jumped at the chance to buy the track.

The dog races usually draw more locals with its 5-pound entry fee. Another 4.95 pounds will get racegoers a two-course meal at the track&#8217;s restaurant, The Race View, Coventry said.

There is also a pub called The Fenman and a snack stand with hot dogs for 1.80 pounds, burgers and other food.

Sheila Jones, who has been racing her dogs at the track for the past three years, said the atmosphere is what keeps her coming back. One of her dogs, Not A Problem, won the first race last Tuesday.

"The track does well because (people) come here and drink," she said. "There aren&#8217;t any top-class dogs that run at this track, but it is nice and friendly."

Another nice part of the dog races is that the bookies take people&#8217;s bets in the stands and dole out bettors&#8217; winnings as well, Jones said.

Admission: stock car races &#8212; 10 pounds for adults, 5 pounds for children 5-14 years old and 25 pounds for a family of two adults and up to four children. Children younger than 5 are free. Dog races &#8212; 5 pounds for anyone 17 and older; youths 16 and younger are free; currently free for any Department of Defense identification card holder.