A Little Off Base: Lions and tigers are close, oh, my, at the Linton Zoo 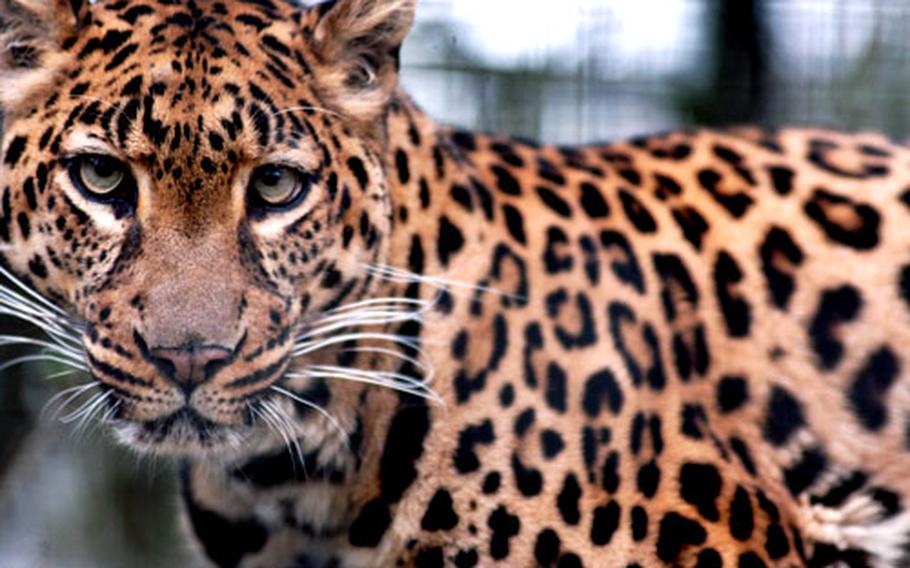 From a perch in her enclosure at the Linton Zoo, a leopard watches visitors pass her cage. (Ben Murray / S&S)

From a perch in her enclosure at the Linton Zoo, a leopard watches visitors pass her cage. (Ben Murray / S&S) 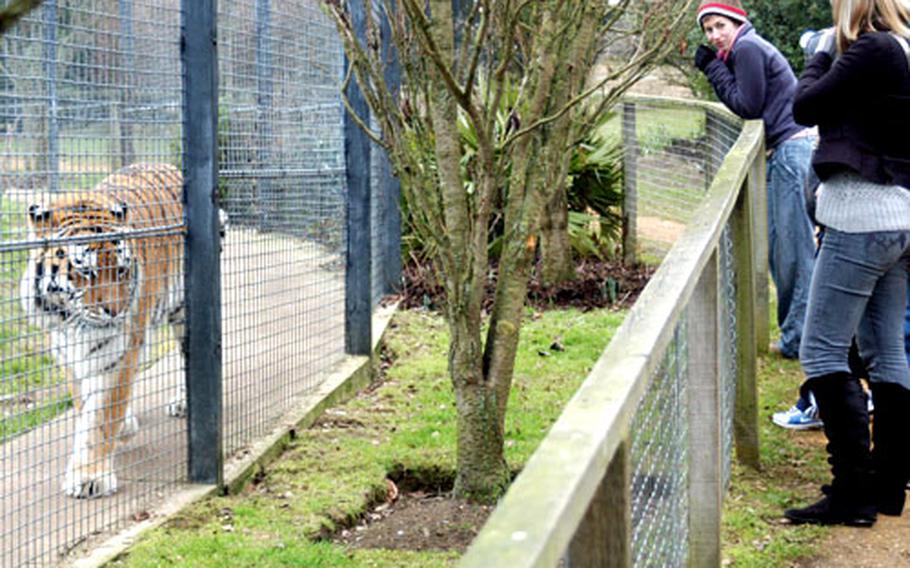 One of the signature features of the Linton Zoo is how close visitors can get to some of the animals, including the big cats. Here, one of the Amur tigers strolls the perimeter of his enclosure while onlookers watch. (Ben Murray / S&S) 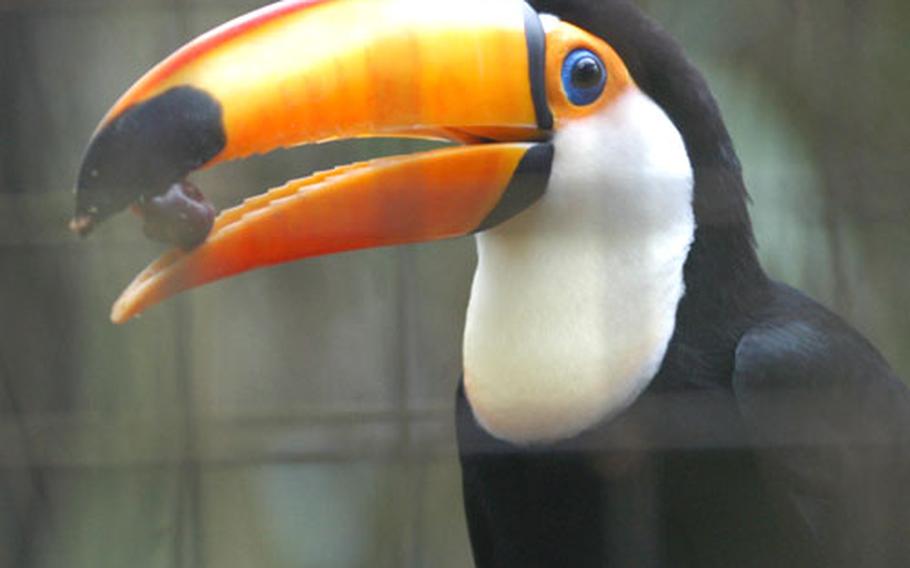 Put that on my bill ... A toucan at the Linton Zoo snatches a quick bite to eat during feeding time. (Ben Murray / S&S) 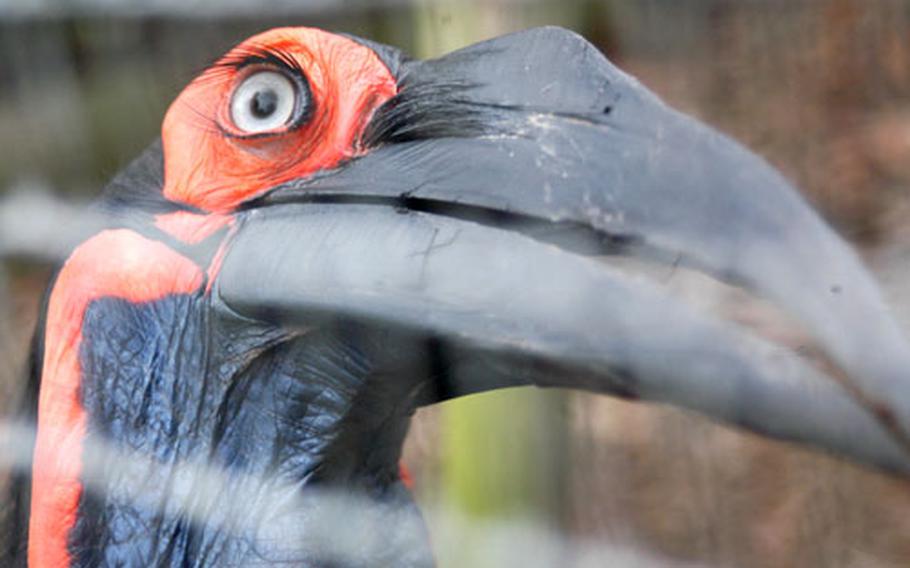 Oboe, the gregarious southern ground hornbill at the Linton Zoo just off the A11 roadway, takes in an eyeful of a visitor to his cage recently. Oboe is one of the animals visitors can get within inches of at the zoo. (Ben Murray / S&S) 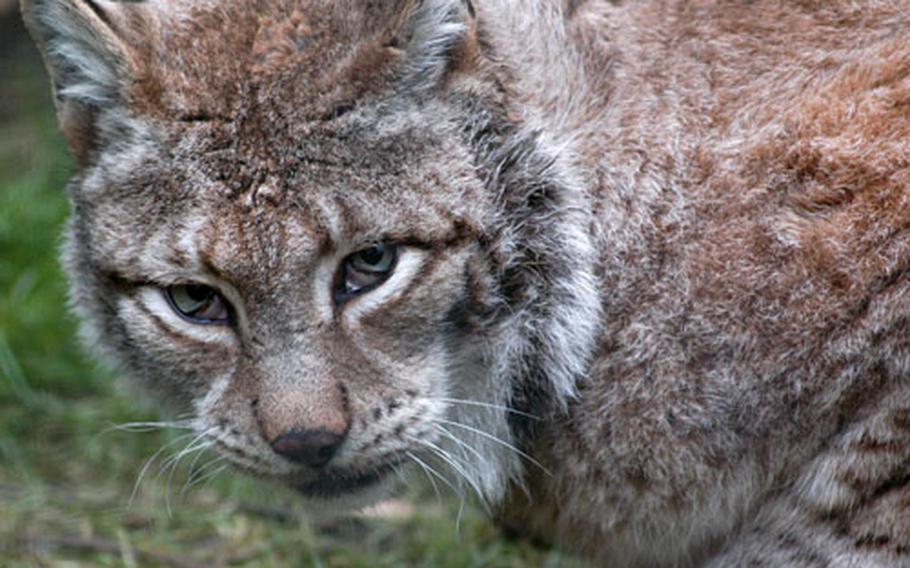 Partway through a lunch of raw rabbit, a Siberian lynx pauses in mid-chew. (Ben Murray / S&S)

LINTON &#8212; Things at the Linton Zoo had been pretty ho-hum for most of a damp February morning.

The lemurs were resting on shadowy indoor perches. The tortoises, blockaded into a far corner of their pen, looked asleep, and even the cockatoos seemed subdued by the cold.

But a faint sense of glum disappointment is the kind of thing you easily forget about when you turn a blind corner through some foliage and there, staring at you attentively from less than 10 feet away &#8212; waiting for you, even &#8212; is a massive African lion.

Already so close that you can hear the thing lick its lips, it&#8217;s the kind of stomach-melting surprise that triggers the human primal panic response, the one meant to save doughy primates in the days before metal fences.

For a zoo to be able to provide such a heart-imploding experience can be rare and, ultimately, it is the one that redeems a trip to the Linton Zoo in winter.

Just off A11 near RAFs Lakenheath, Mildenhall and Alconbury, the Linton Zoo is a relatively small attraction, easily overlooked by American military community members but home to some gems for the zoological enthusiast.

Wandering in through the displays of macaws, hornbills, storks and wallabies, it can make for some slightly frustrating viewing of the smaller animals through closely aligned bars, though bigger species such as the zebras and vultures are never obscured.

The basic setup of the Linton Zoo, however, is also its deliverance when it comes to the prime displays of the park: the big cats.

Rarely will visitors ever get a chance to be so close to a full-sized tiger, lion or leopard than they can here, where just over an arm&#8217;s length of space and a chain-link fence separates the people from the animals.

It makes for an arresting experience, being close enough to large predators to hear their breath and see their individual whiskers &#8212; to be able to almost lean over and touch them &#8212; instead of viewing them across a man-made moat or through a glass barrier.

For variety, the Linton Zoo also fares pretty well for a small park. There are no elephants, giraffes or apes here, but a small cadre of macaques and the zoo&#8217;s extensive lemur breeding program fill in some of the holes. Birds are its most abundant asset, including a large number of owls. The giant tortoises &#8212; when they wander out to graze &#8212; are a captivating highlight.

Additionally, the zoo offers a selection of talks and demonstrations during some parts of the year, though it&#8217;s best to call ahead for times and availability.