A little off base: HMS Belfast The HMS Belfast’s major weapons were four turrets of 6-inch guns with two turrets located near the ship’s bow and two located on its aft. Each turret was manned by 27 sailors and the guns had a range of 14 miles (Photos by Mark Abramson/Stars and Stripes)

The HMS Belfast’s major weapons were four turrets of 6-inch guns with two turrets located near the ship’s bow and two located on its aft. Each turret was manned by 27 sailors and the guns had a range of 14 miles (Photos by Mark Abramson/Stars and Stripes) 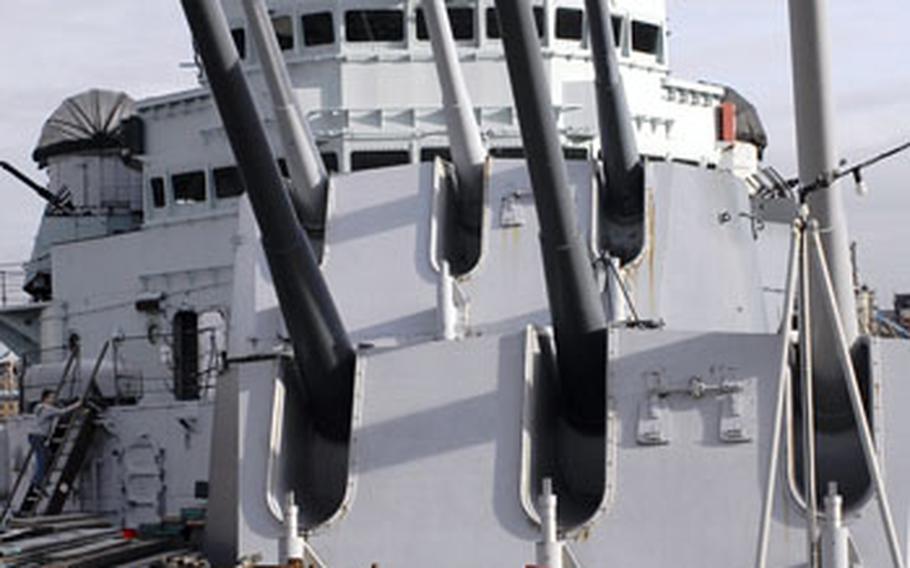 Rounds for the guns can be seen on the ship. () 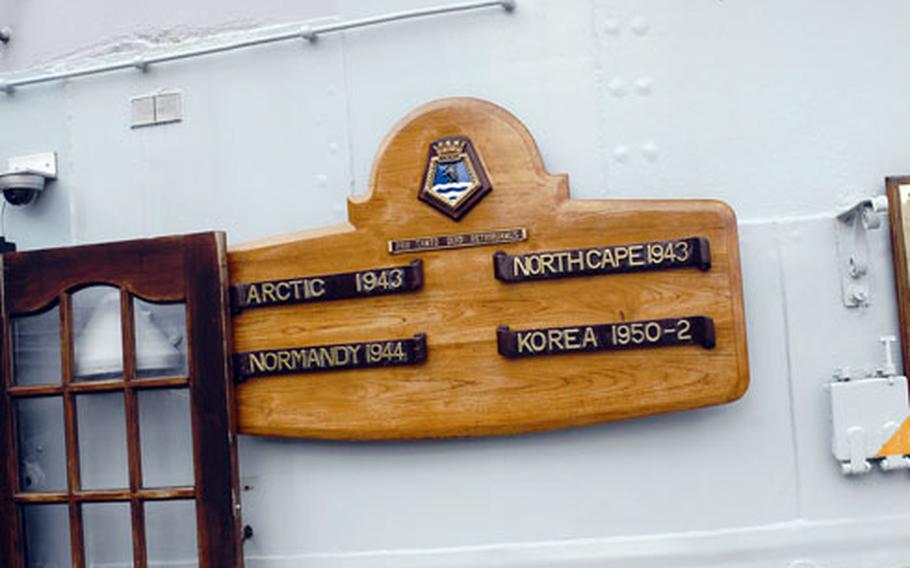 A sign aboard HMS Belfast notes its wartime record. ()

LONDON &#8212; Its menacing gray mass with its 6-inch guns that point skyward and its maze of corridors and ladders that take visitors on a trip back through history enticed about 270,000 people to hop aboard last year.

The HMS Belfast Imperial War Museum World War II warship is a floating piece of British naval history located near some of London&#8217;s most famous landmarks. The ship is docked just down river on the Thames from London&#8217;s picturesque Tower Bridge and near the London Tower. The World War II war machine has welcomed visitors since 1971.

The Belfast is the only surviving example of "big-gun armored warships" that served in the Royal Navy&#8217;s arsenal in the first half of the 20th century, Imperial War Museum officials said. It was launched on St. Patrick&#8217;s Day in 1938 and served until 1965.

Visitors can walk through all of the cruiser&#8217;s massive 175-ton main gun turrets, which lobbed projectiles on D-Day at entrenched Nazi forces at Gold and Juno beaches in Normandy. Each turret was manned by a complement of 27 sailors working in unison and another 22 working in the shell rooms below to feed those weapons. The ship was one of the first vessels to arrive in support of D-Day.

"She was the first major British warship in behind the minesweepers on D-Day," said Nick Hewitt, the Belfast&#8217;s historian with the Imperial War Museum.

George Stevens, the American film director, was aboard during D-Day as part of a U.S. Army film unit and he took movies of the Belfast.

Belfast is still equipped with the weapons from its last refit. Batteries of guns and anti-aircraft guns jut out from the sides. And a Union Jack flag adorns the ship&#8217;s bow.

Walking the corridors of the 1930s-built ship, visitors come to several exhibits, including videos of the Belfast firing her guns, lessons on shipbuilding that include the U.S. and Confederacy&#8217;s use of ironclads in the Civil War and exhibits about what life was like aboard the Belfast.

Photos show the Belfast&#8217;s guns frozen over with Arctic ice as it patrolled the far north &#8212; perhaps as it escorted supply convoys to Russia &#8212; in -30 degree Celsius temperatures.

"The Battle of North Cape is the big one; it was the last big-gun action fought in European waters," said Hewitt. "North Cape is really interesting because it was fought in almost total darkness. The weather was too bad for aircraft. It was an old-fashioned fight between big-gun ships."

HMS Belfast was also one of the first British ships to see action in the Korean War. The ship&#8217;s service included supporting American forces less than two weeks after the North Koreans invaded, museum officials indicated.

The ship stayed out there a year and was nicknamed "the straight-shooting ship" by an American admiral because of its accuracy, Hewitt said.