A Little Off Base: Have fun storming the castle at Arundel 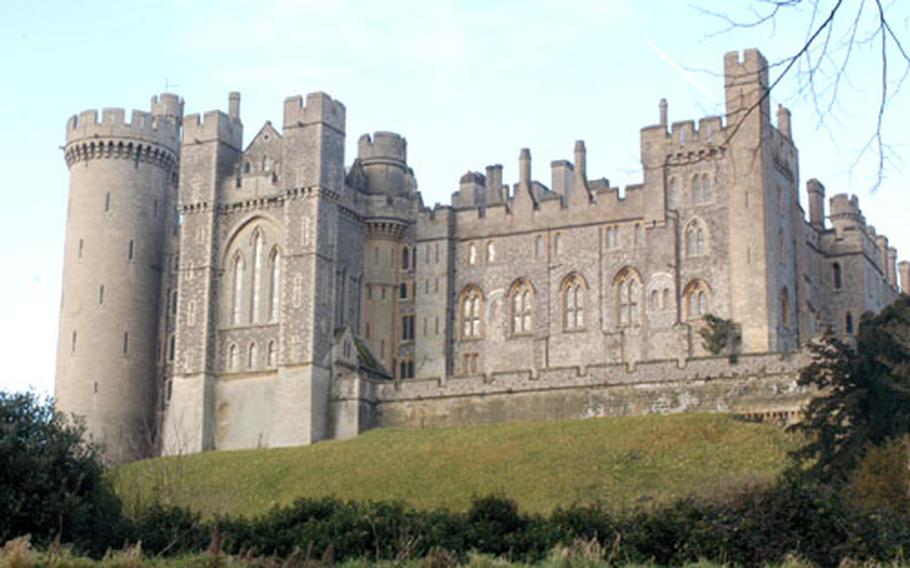 Jutting out over the streets in the downtown area of the town, Arundel castle rises out of the historic city center. (Ben Murray / S&S) In the back garden of the Church of St. Nicholas, a statue stands among the centuries-old graves. In the background, the towers of Arundel castle rise into the sky. (Ben Murray / S&S)

ARUNDEL &#8212; What a downer for a marauding medieval army.

Cresting the rise across the River Arun, marauders can be pictured marching forward, waving their spears and itching to pillage, and then boom, there it is, Arundel Castle.

Seen from the far side of the valley, it&#8217;s a massive fortress that could only inspire defeat in the ill-intentioned. Tall, thick and gray, it once survived a siege for three months before the defenders finally gave in.

The striking sight of the castle in Arundel is still the first thing to catch visitors&#8217; eyes as they approach the small town just off the southern English coast.

It&#8217;s an exciting start to what for many is one of the most pleasant day trips in the region and a draw for families looking for a quiet stroll with the kids and the dog.

Tucked between the seaside and the rolling South Downs, Arundel (pronounced air-un-dull) offers a range of sights and activities in its small central core based on a theme: old stuff.

The action starts at the cobbled and winding downtown center, where Tudor-era houses sport exposed-beam exteriors and multipaneled windows. Medieval-era buildings and 18th- and 19th-century homes are mixed into the building plan, too, giving the place a lively and variable downtown center.

The design makes for easy walking around the shops and gift stores along the central square, but shop owners are all too aware of how popular Arundel can be with tourists, and the prices are set accordingly.

But if Arundel has anything, it is a wealth of options for activities in a small space. Within the downtown area itself, the local tourist office offers audio guides of the town for 3 pounds, giving visitors a self-guided walk through the historic areas.

Squirreled between shops in a narrow alley is another option, the Arundel Ghost Experience (4 pounds for adults), which proffers haunting tales of specters from the town and surrounding area, and a tour of &#8220;the old prison cells.&#8221;

For those into religious architecture, a short walk from the center is the Arundel Cathedral, a 19th-century French-style Gothic church studded with spires, but lacking the distinctive central tower.

Alternatively, for those who would rather float through town, boat rentals are available on the River Arun, which abuts the downtown area, and on Snowbourne Lake, a five-minute walk from the center.

But many of the activities are preludes to a tour of the castle, one of the biggest in England.

Built more than 900 years ago at the end of the Norman conquest of England, the castle is the centerpiece of the town, an impressive structure that underwent improvements for centuries after its original construction.

It stands on raised earthen works at the front and is surrounded by a moat, but its walls also stretch along the heights behind the towns for added protection.

Since the 1500s it has been the home of the successive Dukes of Norfolk, and remains so to this day, with the 18th duke, Edward Fitzalan-Howard, now in residence. Admission prices are vicious, however. Ticket prices for 2006 have not been set yet, but in 2005 entry was 11 pounds for adults and 7.50 pounds for children, though a family ticket was available for 13 pounds. Photography is restricted inside the castle.

Unfortunately, Arundel Castle is also closed until April 2, when it will reopen until October from noon to 5 p.m. Sunday through Friday (closed on Saturday). But with the beach on one side and the hills on the other, regardless of a tour through the castle, a trip to the town is always in season.