A Little Off Base: Get face to face with rugby 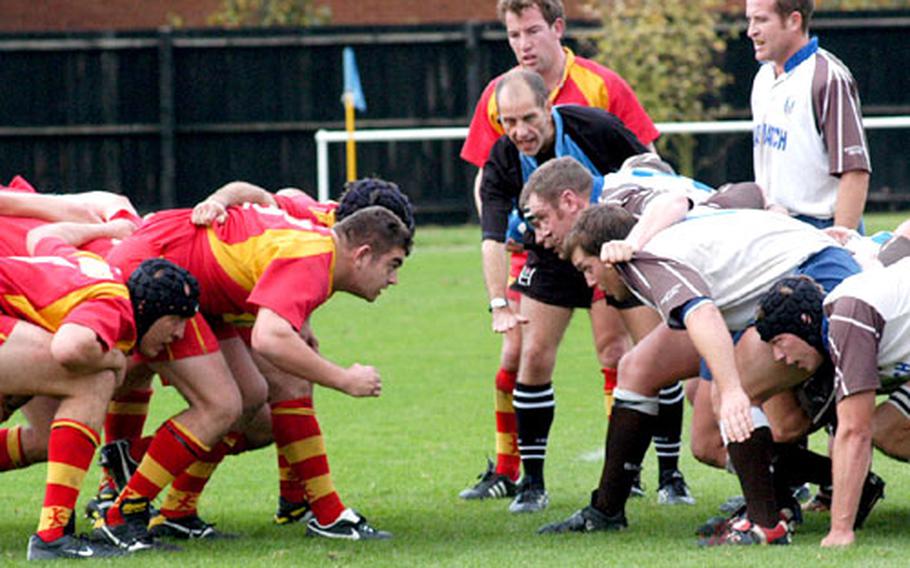 Members of the Cambridge Rugby Union Football Club, left, and the Southend Rugby Football Club, get set for a scrum-down in a recent test at Cambridge. (Ben Murray / S&S) 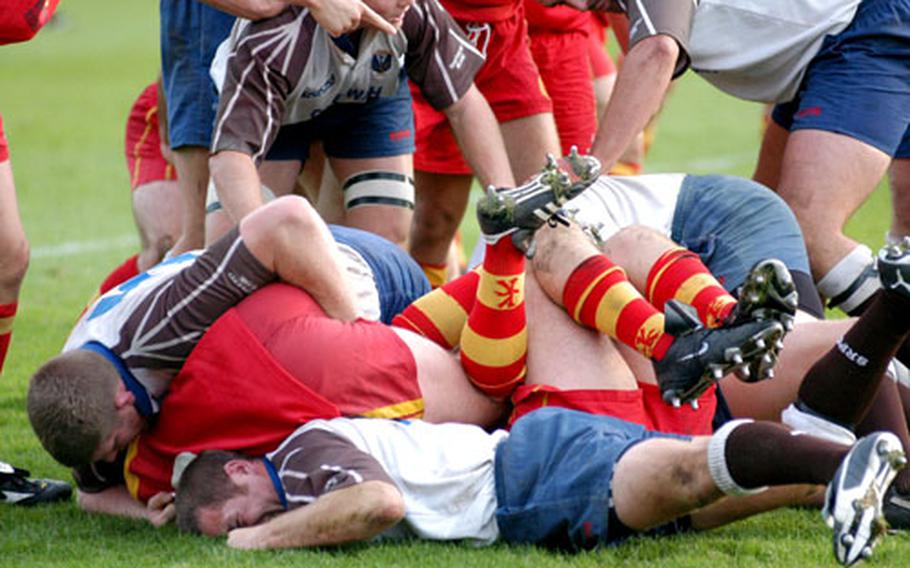 Bodies jarred and limbs akimbo, members of the Cambridge Rugby Union Football Club and the Southend Rugby Football Club pile up in a fight for the ball. (Ben Murray / S&S) 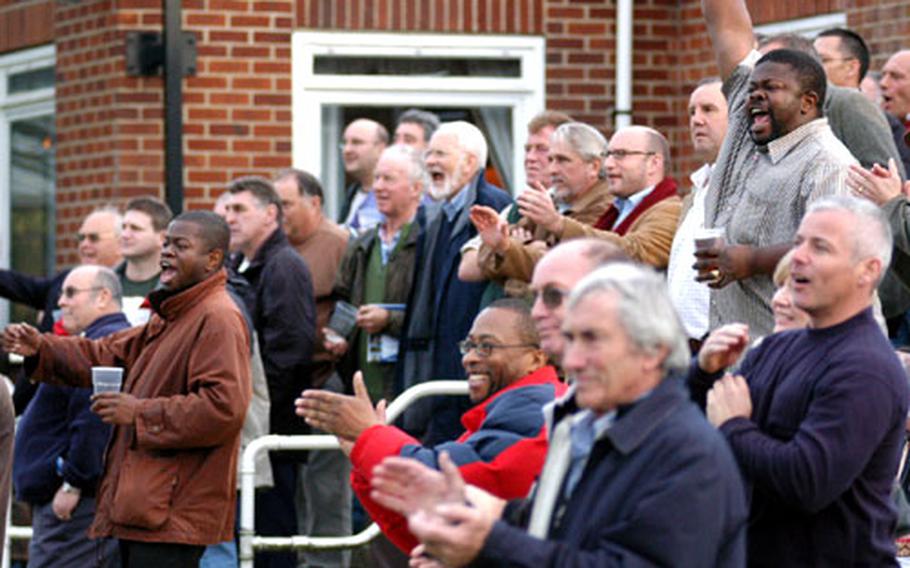 Fans get into the action as the Southend Rugby Football Club takes on the Cambridge Rugby Union Football Club. (Ben Murray / S&S)

He was a big guy from Southend, the visiting team at a recent Cambridge Rugby Union Football Club home test. He&#8217;d picked up a loose ball and decided to run with it, but when he tried to sidestep around a defender from the home squad, he took a shoulder in the ribs that blew him sideways and spun him into the waiting arms of another Cambridge player &#8212; who also walloped him, and a pile started to form.

Hearing men whose upper bodies are clad only in thick cotton shirts smack into each other with force is a disconcerting experience for Americans raised on the pop of colliding shoulder pads and the plastic crack of helmets. There&#8217;s just sort of a quiet thud, the slap of hands on muscle and audible grunts over rustling fabric.

It&#8217;s quiet yet visceral, and, coupled with the unobstructed sight of teeth-grinding grimaces and obvious pain, it makes for an enthralling experience for the violent-sport-minded.

For those looking to get out and watch some live sport on a weekend in England &#8212; and who bemoan the relative equanimity of soccer or cricket &#8212; a visit to the Cambridge team&#8217;s home field can offer an exhilarating afternoon.

Cheaper than a high-profile soccer match (Cambridge rugby charges 5 pounds at the gate) and far less formal than cricket, a rugby test can be a good way to introduce newcomers to the sport because it allows spectators to stand within 15 feet of the vicious pileups and hear the rampant obscenities with crystal clarity.

The crowd is mostly small, loud and supremely loyal to the club, and those who don&#8217;t know the rules of the game will find few fans as willing as rugbygoers to explain some basics. A large part of the game is, after all, the social aspect, and a pint in the hand is almost requisite for those who turn out to cheer the lads on.

In general, the rules are a lot like football, but without downs &#8212; play goes on continuously unless there is a whistle for an infraction or the ball is knocked out of bounds. Blocking is strictly illegal and the ball can only be passed backward as players strive to reach the &#8220;try zone.&#8221;

Known as an exceedingly rough sport, rugby deserves every stitch earned in forming the bloody reputation. During the team&#8217;s last home test, for instance, the paramedic on hand made no less than two dozen visits to the field to check out downed players, three altercations had to be broken up and three men were sent off the pitch for dirty play.

Fighting back repeated attacks from Southend in the game, No. 3-ranked Cambridge had to make several goal-line stands to beat back the visitors, seeded eighth in the National 3 South division. Cambridge won 12-3 on four penalty kicks in the Oct. 22 game.

For those interested in attending, the team plays every other weekend (except Dec. 24) at its home field at West&#8217;s Renault Park on Grantchester Road on the south side of the city, where they have a fully licensed bar and halftime refreshments. More information is available at www.crufc.co.uk.

Speak the language of rugby

Scrum-down: Set play in which eight players from each side face off in a shoulder-to-shoulder pushing match over the ball.

Ruck: A group of players on their feet who collide over a ball on the ground in an effort to push the other team back, get the ball behind the front line and thereby gain possession.

Line-out: A throw-in after an out-of-bounds.

Goal: A kick through the uprights, worth either two or three points.