A Little Off Base: Explore 5,000-year-old mines just outside Thetford 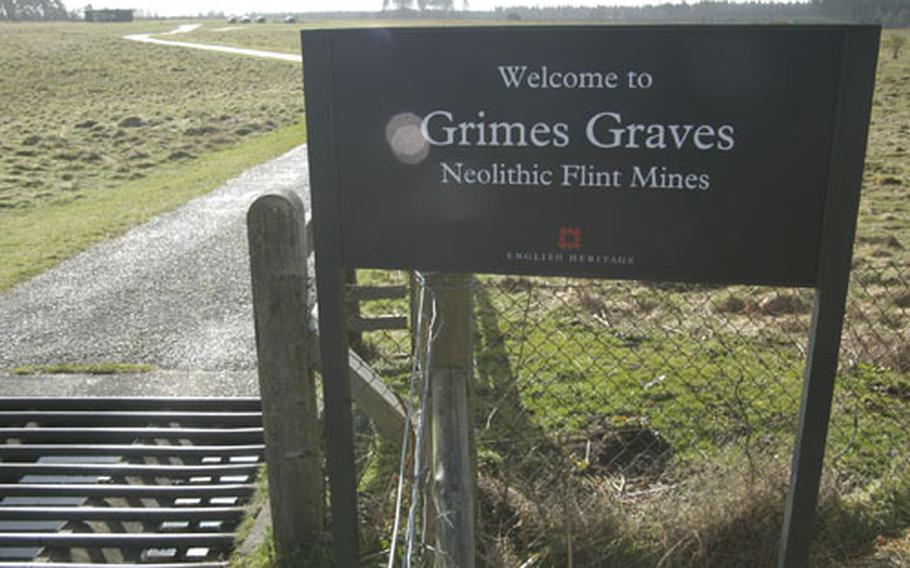 The entrance to Grimes Graves, near Thetford, lies along a one-lane country road. (Ben Murray / S&S)

The entrance to Grimes Graves, near Thetford, lies along a one-lane country road. (Ben Murray / S&S) Some of the Neolithic flint mines at Grimes Graves. The shafts, some as deep as 30 feet or more, were filled in each year with the dirt and chalk dug out of new mines. (Ben Murray / S&S) One of the subterranean "galleries" where Neolithic-era miners dug for flint at what is now known as Grime&#39;s Graves. Photo by Ben Murray (Ben Murray / S&S) 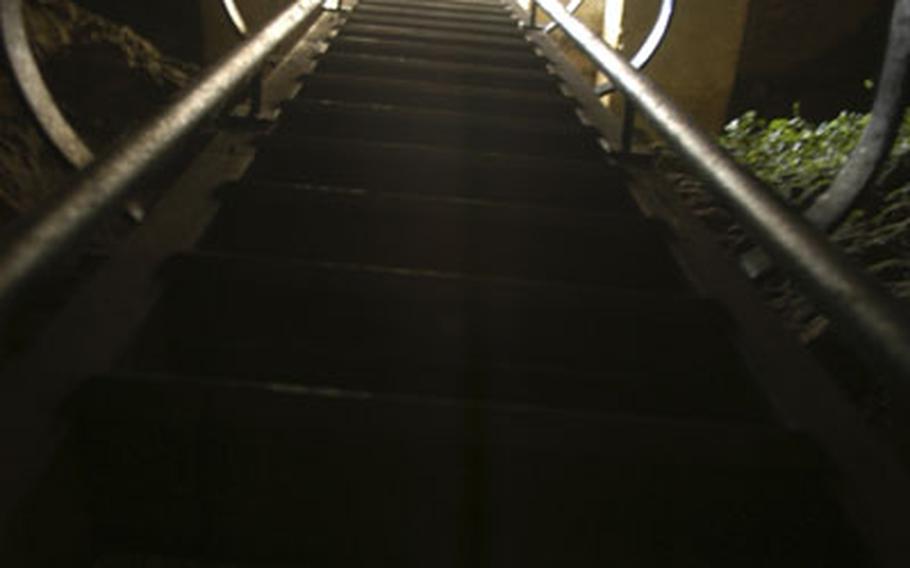 The ladder leading into Pit 1 at Grimes Graves, where visitors can climb down into the only restored flint mine in the United Kingdom. Photo by Ben Murray (Ben Murray / S&S)

NORFOLK &#8212; Chances are, you probably wouldn&#8217;t know a Neolithic flint mine from a hole in the ground.

One of the first lessons visitors learn at Grimes Graves, however, is that the two are nearly impossible to tell apart.

Set among the undulating low hills near Thetford, Grimes Graves is a strangely intriguing historical site not far from RAFs Lakenheath and Mildenhall, where men once delved through layers of chalk and soil to mine flint for their stone tools.

To a first-time visitor, the site looks like the scene of a long-ago carpet-bombing: hundreds of shallow craters packed tightly together over several acres of countryside, half-overgrown with grass and shrubs.

But the circular dents in the ground are one of only 10 Neolithic-era flint mines in England, where work to dig the first pits began 5,000 years ago, in the same era Stonehenge was being constructed.

Instead, they are sites where Neolithic men dug for flint, the hard, dark rock often splintered and shaped to make many of early man&#8217;s basic tools, such as axes and knives.

Cutting through the soft chalk with antlers and stone axes, the workers sunk deep vertical shafts down to the layers of their desired stone, and used ladders and platforms to reach veins of flint more than 30 feet below the surface.

At the bottom of the shafts, workers cut smaller, low-ceilinged &#8220;galleries&#8221; where they mined the stone, then carted it back up to the surface in basic slings and baskets, according to information at the site.

These days, Grimes Graves has the only Neolithic mine shaft open for viewing to the public, and for many visitors it may be the highlight of a trip to the park.

To get into the mine, visitors are guided into a small booth erected over the top of the shaft, where they are handed a hard hat and directed toward a steep wooden ladder that disappears into darkness below.

The ladder drops almost vertically about 30 feet into the pit &#8212; a wide, circular chamber about 25 feet across &#8212; and is steep enough to be a challenge to older visitors and youngsters.

Once inside, visitors can peer into several of the hollowed-out galleries where chalk rubble lies in the low chambers. It&#8217;s here that the hard hat helps, as the access to look into the galleries requires visitors to duck under low rock outcrops.

It&#8217;s a small and somewhat underwhelming spectacle, though it does create an appreciation for how people would have completed such excavations using only stone tools, wood and red-deer antlers.

Outside of the shaft, visitors have a free run of the park and can walk along the rims and slopes of the 433 filled-in mine shafts in the area. An hour for both attractions is likely sufficient for most people, longer for those with a keen interest in Neolithic life.

Getting thereLocation: About seven miles northwest of Thetford. Take the A134 off the A11 and follow the brown signs.

Note: No entry to the mine for children under 5