A Little Off Base: American drama plays out nicely on London stage 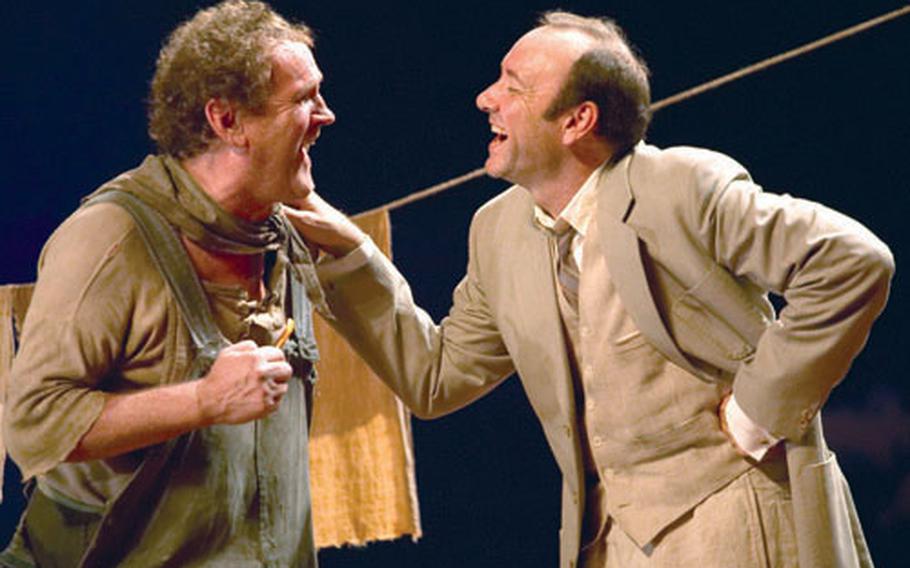 Colm Meaney and Kevin Spacey star in Eugene O&#39;Neill&#39;s "A Moon for the Misbegotten" at London&#39;s Old Vic Theatre. (Photo courtesy of the Old Vic Theatre)

LONDON &#8212; Silver screen star Kevin Spacey delivers a powerful, not-so-subtle portrayal of a wealthy, lovelorn drunk in Eugene O&#8217;Neill&#8217;s tragicomedy &#8220;A Moon for the Misbegotten,&#8221; but is outshined at times by fellow veterans of the stage.

The four-act, three-hour, two-set play set in 1923 Connecticut is playing at the Old Vic Theatre, a few blocks south of the River Thames in Central London. Spacey is involved with the theater under a 10-year contract as the artistic director.

Written in 1943 and first performed in New York in 1957, the play captures 24 hours in the life of a poor Connecticut farm family following the sudden departure of Phil Hogan&#8217;s second son from the family.

The play runs long &#8212; two 1.5-hour sets &#8212; but not because the plot is complicated. The comedy turns tragic as Josie&#8217;s and Jim&#8217;s lustful innuendos and wise-cracking conjectures devolve into drunken accusations and longings for forgiveness.

The two give bold and often jarring performances on the stage set with little more than a wooden tenement shack, a crooked utility pole and what appears to be an endless blue sky.

&#8220;A Moon for the Misbegotten&#8221; strikes the universal chords of love, addiction and forgiveness with a poignant sadness and raw emotion drawn largely from the life of its author.

O&#8217;Neill, born to an alcoholic traveling theater performer in a New York City hotel room, lived an unbalanced life of vice, decadence and, somehow, literary brilliance on his way to four Pulitzer Prizes and, ultimately, the Noble Prize in literature in 1936.

When the play first hit the stage in the late 1950s, it was banned from many American theaters for salacious material. But during last Saturday&#8217;s matinee full-house performance, the talk of soliciting a prostitute on a train and drinking sunrise to dusk barely raised an eyebrow.

The play has drawn a chorus of excellent reviews from across the London theater community and is expected to continue to sell out through its run, which ends Dec. 23.

For information on tickets, which range from 10 to 28 pounds, visit www.oldvictheatre.com.

According to the theater Web site, the nearest Underground stations are Waterloo and Southwark. If you drive, remember that the Old Vic is inside the congestion charge zone. The daily charge of 8 pounds applies Monday through Friday, 7 a.m. &#8211; 6:30 p.m., excluding public holidays.