A little of base Picture-perfect End 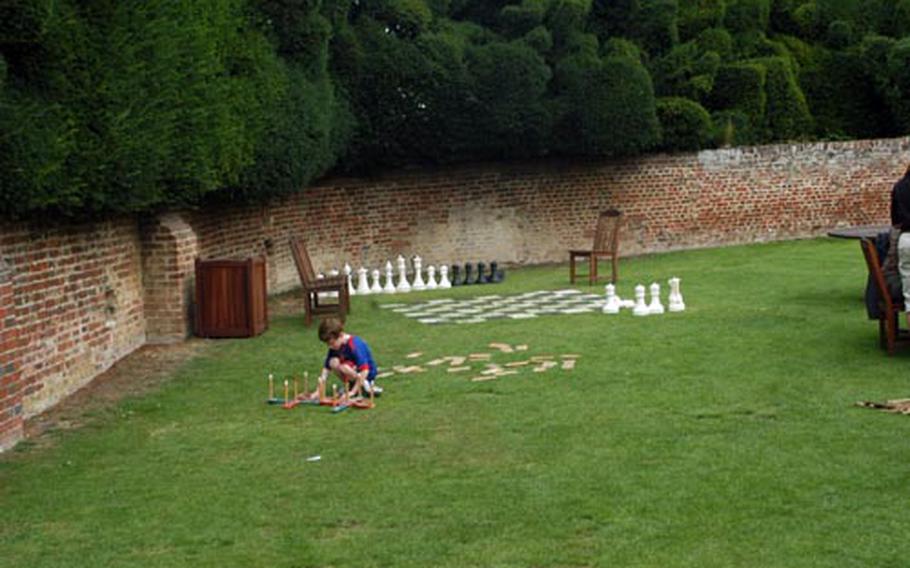 A boy plays with a one of the various games strewn about the lawn at Audley End House in Essex. With tours of the lavish interiors, working servants&#39; quarters and lush gardens, it&#39;s a place you can spend the day exploring. (Charlie Reed / S&S)

A boy plays with a one of the various games strewn about the lawn at Audley End House in Essex. With tours of the lavish interiors, working servants&#39; quarters and lush gardens, it&#39;s a place you can spend the day exploring. (Charlie Reed / S&S)

The Audley End House in Essex is among the most notable examples of Jacobean architecture in Britain. (Charlie Reed / S&S)

The kitchen gardens at Audley End House in Essex look much the way they would have in the Victorian Age, brimming with herbs, vegetables and flowers to supply the house. (Charlie Reed / S&S)

The book store at the Audley End House in Essex. (Charlie Reed / S&S)

SAFFRON WALDEN &#8212; There&#8217;s plenty to keep you entertained at Audley End House but the drive up to the picturesque estate is probably its most impressive feature.

Situated in the hilly countryside of Essex, the view of the mansion is so quintessentially British, it feels as if you&#8217;re entering a landscape painting as you make your way through the iron gates.

A playground for royals and aristocrats during its heyday in the 17th and 18th centuries, the estate originally was home to a Benedictine monastery when King Henry VIII granted it to Sir Thomas Audley in 1538.

Audley&#8217;s grandson, Thomas Howard, later built a much grander mansion, primarily for entertaining King James I, though the heir later was imprisoned in the Tower of London for embezzlement. Howard&#8217;s stately connections &#8212; and an exorbitant fine &#8212; got him out of the klink, but he still died in disgrace at Audley End in 1625.

Over the next century, the house was gradually demolished until Sir John Griffin came along and reshaped the mansion into its current 18th-century grandeur. Audley End is a noted example of Jacobean architecture, a late English Renaissance style influenced more by German and Flemish designs rather than an Italian aesthetic.

Audley End was occupied by a Polish branch of the Special Operations Executive, a quasi-military organization established by Winston Churchill, during World War II. A memorial to the 108 Poles who died in the service stands in the main drive.

With tours of the lavish interiors, working servants&#8217; quarters and lush gardens, Audley End House is a place that you can spend the day exploring. Touches such as the costume-clad staff and kitchen gardens only enhance the fanciful experience.

There are giant chess boards in the gardens that delight both the young and old, as well as several cafes and gift shops to break up the historic overload that can set in on outings such as this.

Just about 40 minutes from RAFs Lakenheath, Mildenhall and Alconbury, the Audley End House is worth the drive through the country to get there. And whether you spend the day or just a few hours, you&#8217;re sure to be impressed.