'A little bit of chaos' 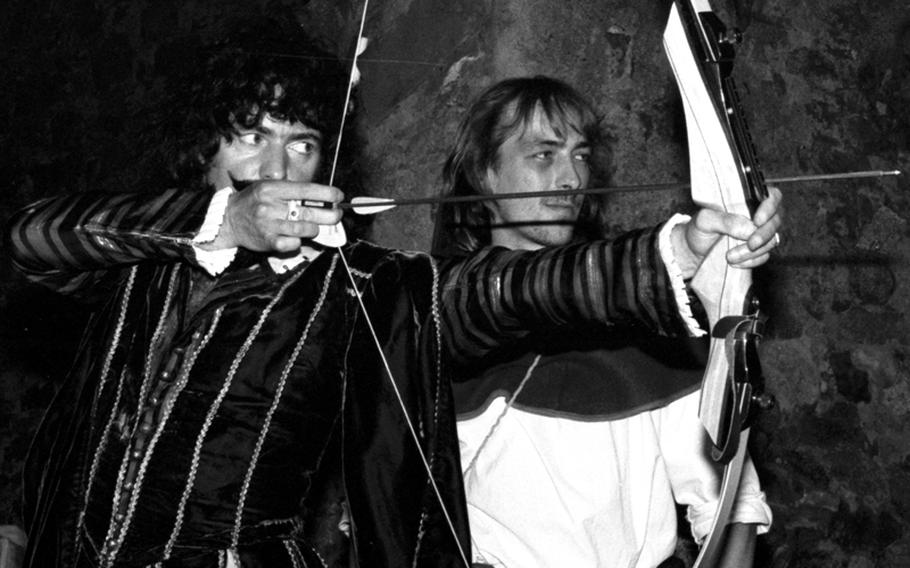 Deep Purple guitarist Ritchie Blackmore, clad in a medieval outfit complete with fake beard and mustache, tries his hand at the longbow during the hard-rock band's record-release party at Frankenstein Castle, near Darmstadt, Germany, in 1988. (Anita Gosch/Stars and Stripes)

Deep Purple guitarist Ritchie Blackmore, clad in a medieval outfit complete with fake beard and mustache, tries his hand at the longbow during the hard-rock band's record-release party at Frankenstein Castle, near Darmstadt, Germany, in 1988. (Anita Gosch/Stars and Stripes) 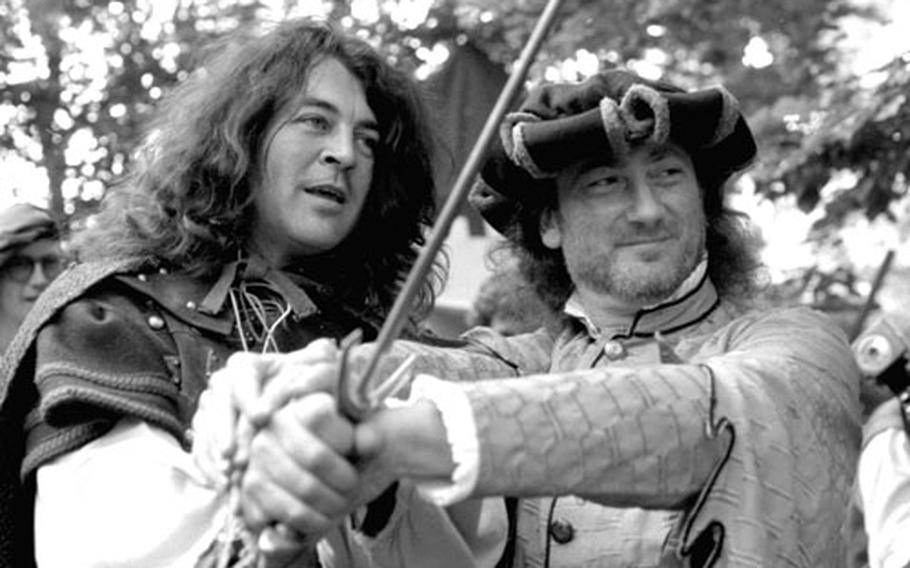 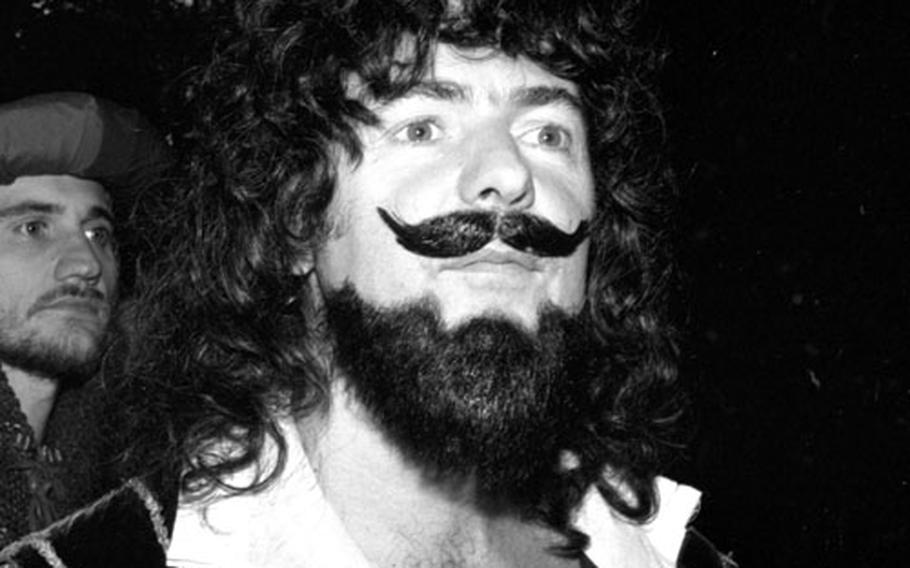 Guitarist Ritchie Blackmore, with a fake mustache and beard. (Anita Gosch/Stars and Stripes) 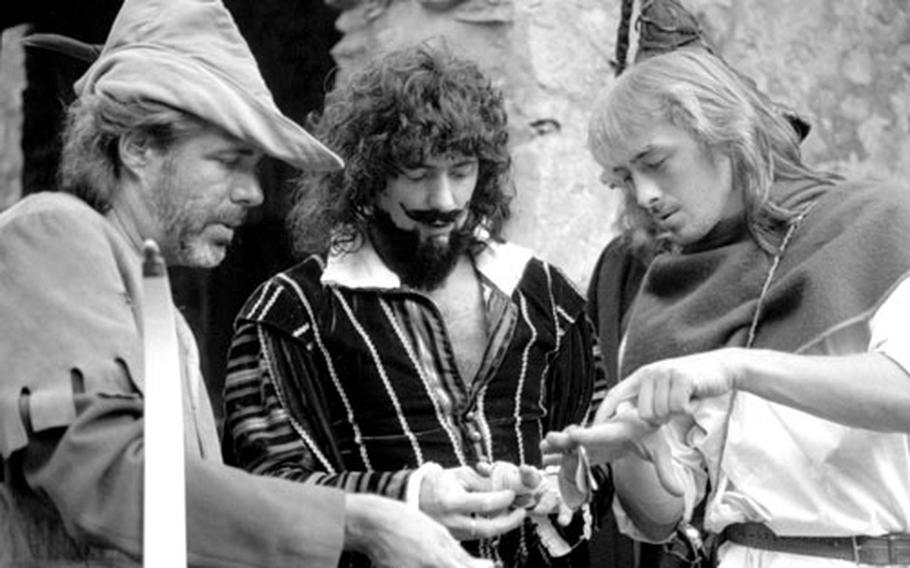 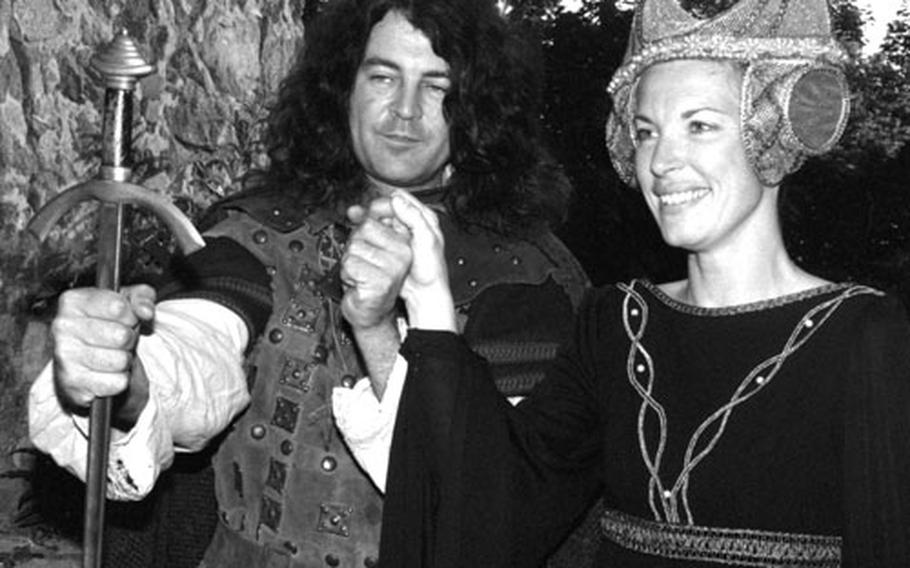 Ian Gillan with a medieval maiden. (Anita Gosch/Stars and Stripes) 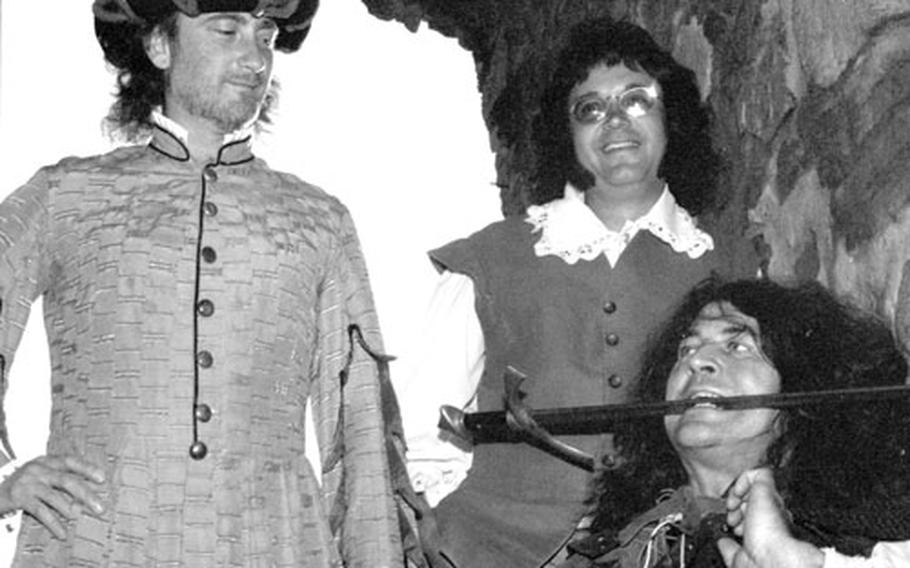 Deep Purple, in the medieval spirit at Frankenstein Castle. (Anita Gosch/Stars and Stripes)

BEING A MEMBER of Deep Purple is serious business. As lead singer Ian Gillan puts it, there's the "importance of the name" &mdash; the distinction of being one of the forerunners of British heavy rock in the 1970s.

But the members of Deep Purple don't always take themselves too seriously.

During a recent visit to West Germany, Gillan, bassist Roger Glover, drummer Ian Paice and even enigmatic lead guitarist Ritchie Blackmore donned medieval garb to revel in an evening of mad debauchery at the Frankenstein Castle near Darmstadt. (Keyboardist Jon Lord preferred to stay away.) Members of the European press, also dressed in medieval costumes, joined the rockers for traditional dining and merrymaking.

Despite the frivolity, the party marked a serious occasion. Deep Purple had just released a double-live album, titled Nobody's Perfect, and the bandmembers wanted the press to spread the word.

The album is a 13-song retrospective that spans Deep Purple's 20-year music career. It contains such Purple classics as 1968's Hush, the band's first single, originally sung by vocalist Rod Evans; Highway Star and Child in Time, from the 1970 album In Rock; Smoke On the Water, from 1972's Machine Head; and the title tracks of Perfect Strangers, the 1984 comeback album, and 1985's Knocking On Your Back Door.

The album was recorded during Purple's 1986-87 world tour. Bassist Glover calls it an "honest" album in that little studio wizardry was used in the recording.

"We didn't go in and try to dub it up &mdash; well, just a little bit," he said in a press conference held earlier that day in Frankfurt. "We used performances together. There may be a solo from Oslo and a backing track from Vienna, which I think is acceptable."

So why would Deep Purple release an album of songs that have been recorded several times before, many of them on such live LPs as Made in Japan and Made in Europe?

"Because they have a new life," said Glover. "For example, Smoke On the Water. If I listen to the Made in Japan version and I listen to [the song] on this new album, they're two totally different songs. A different spirit is there, a different feel. They're rejuvenated."

Drummer Paice agrees that the songs are more modernized than the older versions, but he admits he has one reservation about the album.

"Maybe for the fans who really like Purple, they want to have lots of different versions of the songs they like," he said in a separate interview. "My only reservation about it is, I wished that we could have had maybe two more new songs on the album and two less old ones."

Deep Purple was formed in Germany in 1968. Midway through the band's career, the musicians changed styles from pseudo-classical, keyboard-oriented rock to guitar-driven heavy rock. The group soon became one of the most successful and influential bands of the early '70s, joining the ranks of Black Sabbath and Led Zeppelin, and gained notoriety as the loudest group in concert.

In 1973 singer Gillan left to pursue a solo career. He was replaced by David Coverdale of Whitesnake fame. Shortly after, Glenn Hughes replaced bassist Glover and, in 1975, the late Tommy Bolin replaced guitarist Blackmore, who had left to form Rainbow.

In 1984 Deep Purple staged a successful comeback with the lineup of Gillan, Blackmore, Glover, Paice and Lord.

"We'd been talking about it for years," said Paice. "So we got together, we played [and] we enjoyed it. We knew within five minutes of playing with each other that it was very easy just to fall into each other's groove and not have to think about what the other guy was going to do. There's just an empathy there and an understanding."

Gillan admits the bandmembers were nervous at first about the public's expectations of the reformed Purple.

"It took a while to regain the confidence of doing things naturally," he said. "It is difficult when everything you do is scrutinized to such an extent, having lost 10 or 11 years of continuity, to just come back and be Deep Purple again, when probably the name grew bigger than the band ever was."

With the renewed popularity of hard rock in recent years, Paice said he was confident that the comeback would be successful; what he didn't expect was the band's ability to carry on after the initial excitement. But after sell-out tours around the world with Perfect Strangers, Paice knew that Purple was here to stay.

"I attribute that to two things," he said. "We're very good on stage, and whatever we're doing is exactly what people want to see when they come to a rock 'n' roll show: excitement, a little bit of chaos, a little bit of not knowing what's going to happen next."

After all the years of touring, the members of Deep Purple have no intention of quitting just yet. This year the group will record another studio album before setting out on yet another world tour in 1989. It's the "thrill of going on the road" that keeps Deep Purple going, said Gillan.

"We've got some dates coming up in the United States in the summer, and I've got my bags packed already. I'm looking forward to that."