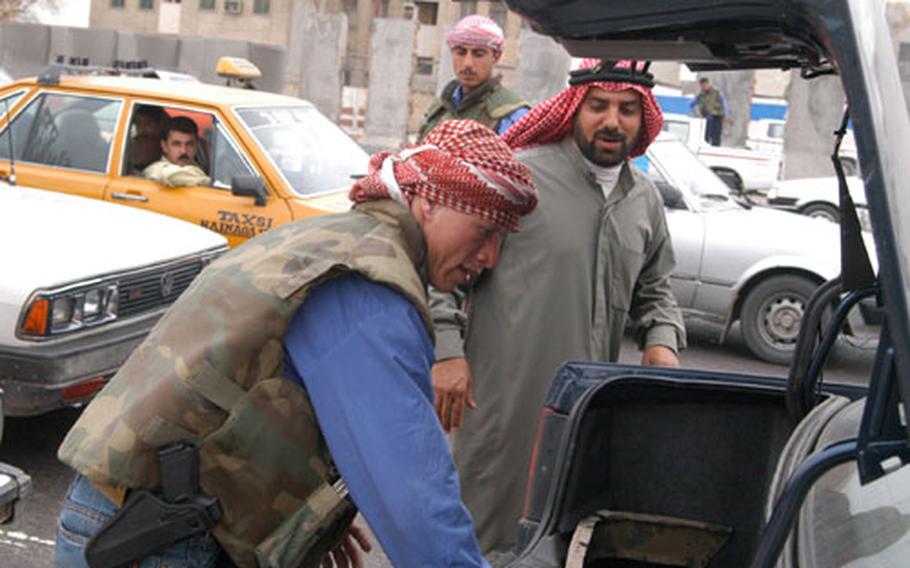 The Iraqi police corps — like these shown searching a car in Mosul in March — have come under fire lately for their poor performance in places, such as Fallujah. U.S. officials have called their actions "a major disappointment." (Anas Dulami / S&S)

The Iraqi police corps — like these shown searching a car in Mosul in March — have come under fire lately for their poor performance in places, such as Fallujah. U.S. officials have called their actions "a major disappointment." (Anas Dulami / S&S) 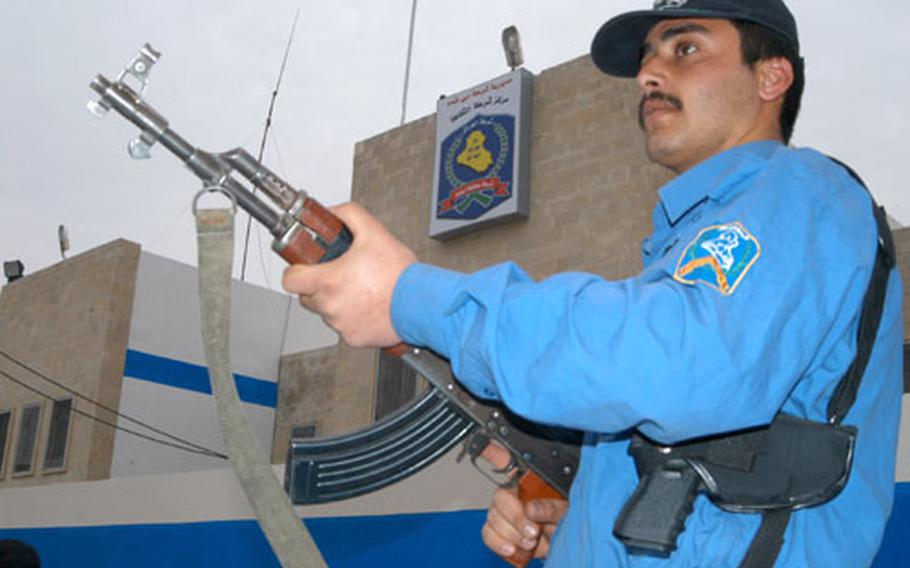 Cpl. Gazwan Al-Tahi stands outside the the Mosul Police Station in Iraq. Iraqi forces, including the police, have been criticized for taking fire from men trying to kill them and refusing to shoot back, Maj. Gen. Martin Dempsey, commander of the 1st Armored Division said this week. (Anas Dulami / S&S)

Iraqi police recruits last year would take fire from men trying to kill them and refuse to shoot back, according to Maj. Gen. Martin Dempsey, commander of the 1st Armored Division.

It wasn&#8217;t for fear, loyalty to kinsmen or self-sacrificial kindness.

&#8220;They thought that if they killed someone, they might be responsible to pay the blood money,&#8221; Dempsey said.

The fix was relatively simple. The Iraqi Interior Ministry put out a letter stating officially that police would not be responsible for paying blood money, a form of compensation in Iraqi tribal law.

But that early difficulty with police, hired and trained by the U.S. military, foreshadowed the continuing problems with the entire Iraqi security force, some of whom declined to muster, refused to fight, abandoned their posts and even joined the other side during recent battles, especially in Fallujah.

While U.S. officials said no one expected that Iraqi forces would be able and ready to replace U.S. soldiers by now, they have expressed &#8220;great disappointment,&#8221; as Lt. Gen. Ricardo Sanchez put it, in the performance of many units.

Added Dempsey, &#8220;We needed to provide an Iraqi pressure to perform, not just an American one. We needed to find a way sooner. That is crystal clear to me.&#8221;

In the past week, working to remedy the leadership problem, the U.S.-led coalition has appointed six to eight former generals from Saddam Hussein&#8217;s armed forces. The generals were already in the pipeline, and have been going through a months-long vetting process, said Maj. Mark Martin, a spokesman for the Office of Security Cooperation. Among those appointed are a Sunni, a Kurd and a Shiite. &#8220;It&#8217;s a pretty good cross mix,&#8221; Martin said.

None of them was in the top four tiers of the Baath Party, Martin said, which would have disqualified them from serving in the new Army under a year-old policy that Paul Bremer, U.S. administrator of Iraq, brought from Washington, D.C. The policy disbanded the Iraqi army and denied posts to former Baathist military officers and others who had been in the top four party levels.

But the &#8220;de-Baathification&#8221; policy is being revised, officials said, after months of complaints that it was keeping capable people from contributing and slowing efforts to rebuild and provide security for the country.

After &#8220;major combat operations&#8221; ended a year ago, the United States hired some 72,600 Iraqi police; some 32,450 members of the Iraqi Civil Defense Corps, analogous to a National Guard; and some 6,030 soldiers from the Iraqi army, about half of which are in training, according to the coalition press office.

All have been targeted by insurgents, who view them as tools of the U.S.-led occupation. Police stations in particular have been car bombed, including three in Basra on Wednesday. Among the 68 people killed in those blasts were 10 Iraqi policemen and a busload of schoolchildren.

By American standards, the forces&#8217; pay and training are minimal. ICDC members get four weeks of training in such matters as how to identify bombs, use weapons, search detainees and understand commands in English, while Iraqi armed forces and police each get eight weeks of training.

For their part, Iraqi security forces have complained about the pay and lack of equipment, and they say they&#8217;re often outgunned and usually outnumbered.

U.S. officials are sympathetic to some of those concerns. In Sadr City earlier this month, Kimmitt said, when the militia of anti-American Shiite cleric Moqtada al-Sadr attacked police stations, it was understandable that the police fled. &#8220;Very few police forces in the world would be able to hold up to a militia of hundreds of people,&#8221; Kimmitt said.

But it was for a different reason that large numbers of security forces refused to fight in Fallujah. One Iraqi battalion that came under fire and took some casualties decided that getting out of there was the better part of valor.

So the failure was in the command &#8212; both Iraqi and ultimately the U.S., Martin said, which did not communicate clearly. &#8220;It was a leadership failure,&#8221; Martin said. &#8220;A failure to explain the mission to the troops. An experienced commander would make sure that everybody understood what was going on.&#8221;

Kimmitt said leaders of poorly performing units would be replaced.

Although experienced Iraqi commanders have been hard to come by, Kimmitt said the de-Baathification policy had been implemented for a valuable reason: to form a security force &#8220;built on civil rights and civilian control of the military, and one that is not a tool of a former dictator.&#8221;