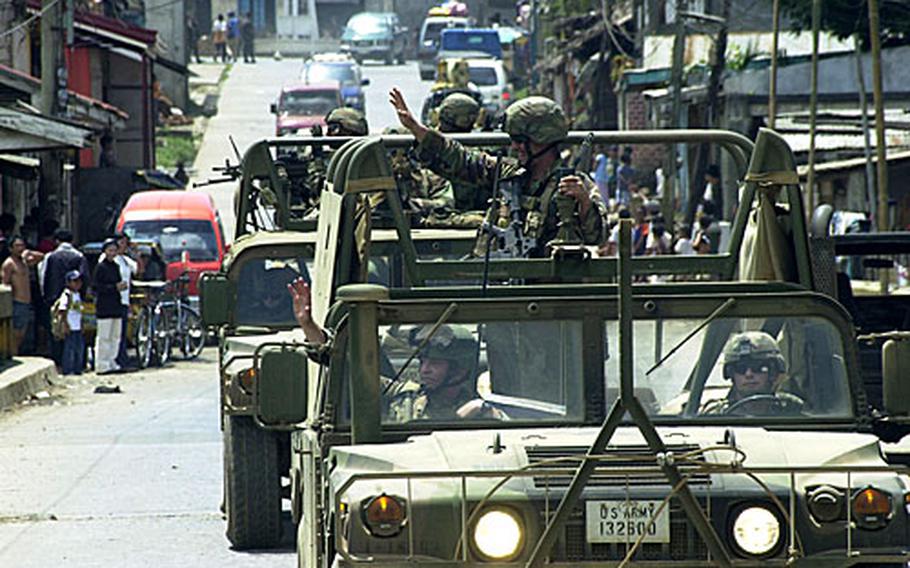 Five years later, the United States remains &#8220;engaged here in a very comprehensive way to change an environment, to help a key non-NATO ally defeat a very, very serious terrorist threat,&#8221; according to a senior State Department official who agreed on the condition of anonymity to brief Stars and Stripes.

The Armed Forces of the Philippines is actively fighting the Abu Sayyaf Group &#8212; a terrorist faction that split from the Moro National Liberation Front in the early 1990s &#8212; and the Indonesia-based Jemaah Islamiyah.

The groups found a home in the Mindanao area &#8212; including the Sulu Archipelago &#8212; the poorest area of the Philippines. The overall sense of lawlessness, lack of functional government and low quality of life made it an ideal breeding ground for terror, officials said.

&#8220;From our own peace and security view, it&#8217;s an important part of the country,&#8221; said U.S. Ambassador to the Philippines Kristie A. Kenney during an interview in her office in Manila.

But it&#8217;s in both countries&#8217; interests to eliminate the groups &#8212; and the conditions that allowed them to operate, several officials interviewed said.

The Philippines is &#8220;a theater in the global war on terror,&#8221; the State Department official said. If there was any doubt about that, he said, it could be removed when Philippine troops overran the Abu Sayyaf base camp on Jolo on Aug. 3. There, they found explosive devices and a factory to manufacture them.

A U.S. explosive ordnance disposal technician working with the Joint Special Operations Task Force-Philippines said, &#8220;Hey, these are devices that I&#8217;ve seen in Afghanistan and Iraq,&#8221; the official said.

Taking on the task

Kenney said the U.S. understands fighting an insurgency is a long and complicated process: &#8220;Our engagement wasn&#8217;t focused on making something happen tomorrow.&#8221;

The State Department official agreed and said it was a matter of discovering the best way to work in partnership with the Philippine government.

&#8220;So the Philippine government has requested our assistance to help with this and how we&#8217;re attacking this problem is a way that uses these three Ds: defense, diplomacy, development,&#8221; he said.

The diplomacy side is critical, he said.

Kenney is &#8220;worth a battalion&#8221; of troops, the State Department official said, because she&#8217;ll go into an Abu Sayyaf Group safe haven &#8220;talking about hope, talking of the future, talking about development and giving these people a sense of an alternative future, a future without terrorism.&#8221;

Kenney said she believes the work is paying off.

At some point, she said, the people &#8220;want their children to grow up in schools, prefer for them to have jobs and &#8230; prefer for them not to be spending their time in the hills of Jolo&#8221; following terrorists.