A heavy job that calls for heavy equipment 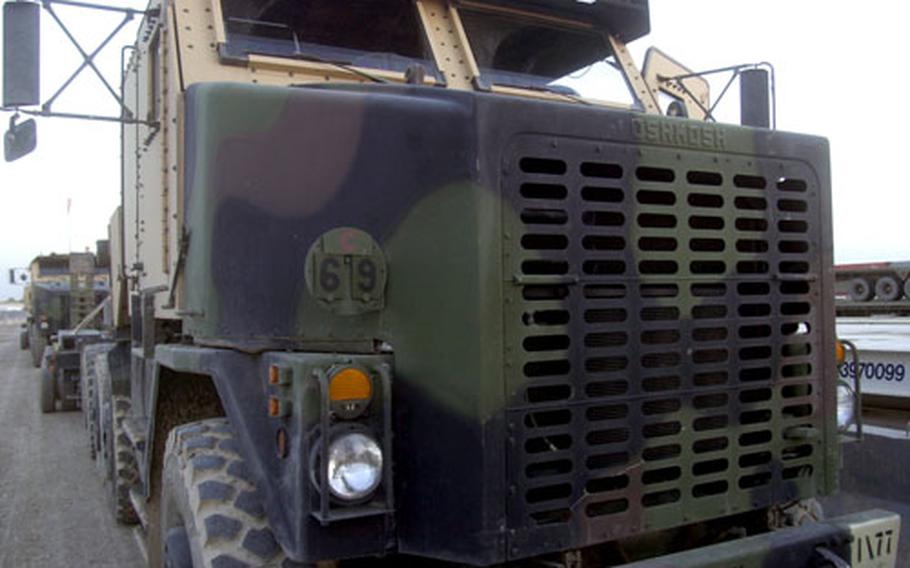 A HET, or heavy equipment transporter, prepares to continue a convoy to Baghdad International Airport. The massive truck and trailer system boasts 48 wheels and a trailer with rear-wheel steering. It is capable of hauling M1 tanks and some of the military’s heaviest equipment. (Steve Mraz / S&S)

A HET, or heavy equipment transporter, prepares to continue a convoy to Baghdad International Airport. The massive truck and trailer system boasts 48 wheels and a trailer with rear-wheel steering. It is capable of hauling M1 tanks and some of the military’s heaviest equipment. (Steve Mraz / S&S) 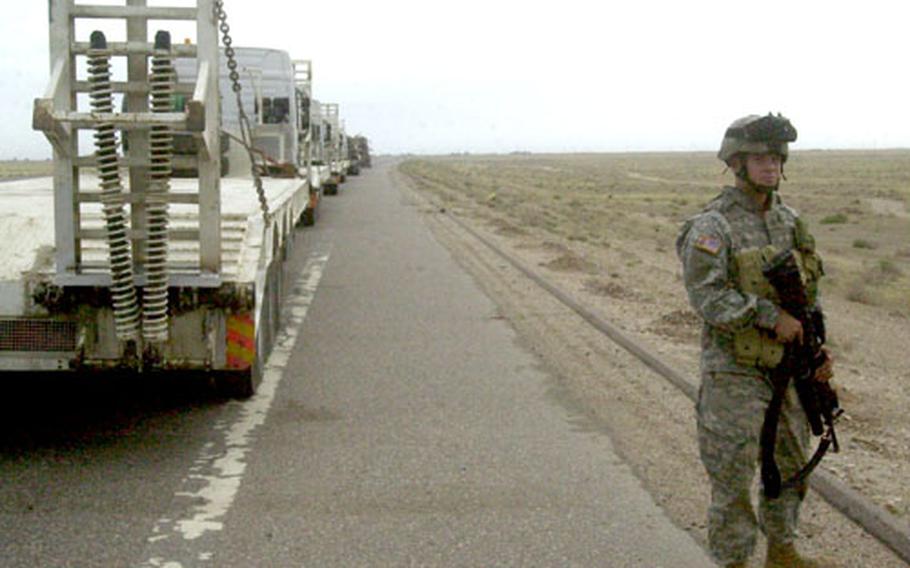 BAGHDAD INTERNATIONAL AIRPORT &#8212; An armored rig roars down the open road, equipped with a 500-horsepower engine and 48 wheels.

The soldiers of Battery B, 1st Battalion, 77th Field Artillery Regiment out of Fort Sill, Okla., are driving the Heavy Equipment Transporter, or HET. It&#8217;s the Barry Bonds of big rigs.

A portion of the battery&#8217;s 2nd Platoon recently navigated Iraq&#8217;s dangerous, roadside-bomb-laden highways and made it to Baghdad International Airport without incident or injury.

The converted artillery soldiers have been transporting tanks and an assortment of the military&#8217;s heaviest equipment into Iraq since 1-77 arrived in October. Their mission is to bring units&#8217; equipment into Iraq after it arrives in Kuwait.

The artillery battery is just one of several units that has fallen under the battalion-level Logistics Task Force 28, which arrived in Kuwait in August. The 28th Transportation Battalion, out of Mannheim, Germany, is known as Logistics Task Force 28 during this deployment. Since LTF 28 arrived, soldiers have driven more than 3.5 million miles during convoys.

While the units under LTF 28 are stationed in Kuwait, Lt. Col. Stephen Farmen, LTF 28 commander, said 95 percent of the mission is in Iraq.

The soldiers drove through Kuwait and southern Iraq, stopping at camps along the way for fuel and rest.

But it&#8217;s not only soldiers who participate in the convoys. Third-country nationals drive &#8220;white&#8221; or contracted trucks that are interspersed throughout the convoy, which is protected by several Humvees. A mix of Filipinos, Indonesians, Turks and Indians accompanied the military convoy this time and the language barrier didn&#8217;t seem to be a problem.

As the convoy got closer to Baghdad, the threat of small-arms fire and roadside bombs increased. Before making the last leg of the trip to the airport, one soldier gave some friendly advice, quoting from the movie &#8220;Dodgeball.&#8221;

A roadside bomb was located on the main supply route the convoy was traveling Wednesday night. An explosive ordnance disposal team was dispatched to the site, and the convoy was held up for some time.

Just prior to midnight Wednesday, the convoy made it safe and secure to a staging area at Baghdad International Airport &#8212; without the need to employ the five D&#8217;s.

The following is a sample of the some of the music soldiers listen to while on convoy: