A hearty welcome home for some Illsheim soldiers 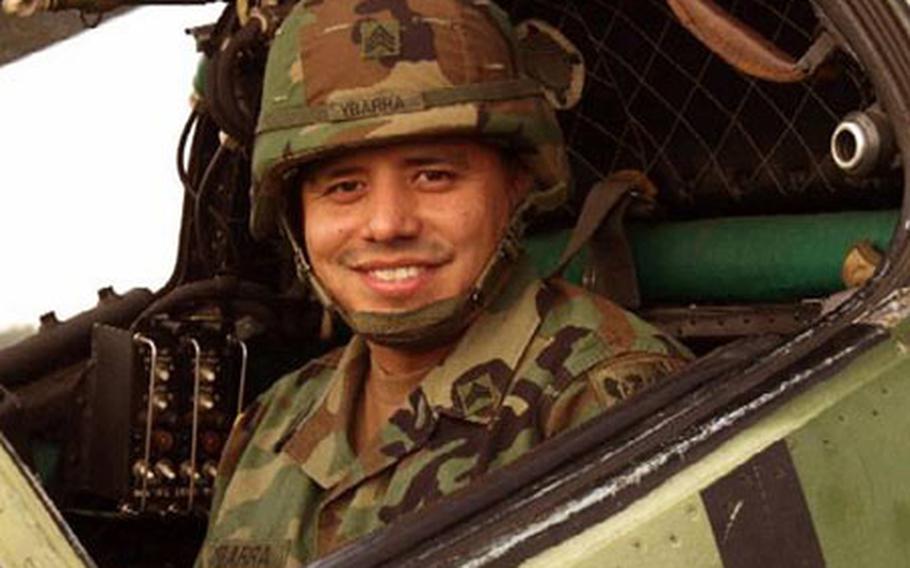 ILLESHEIM, Germany &#8212; The music ended, the speeches over, Capt. David Grossman rushed over from the formation of soldiers toward the crowd of cheering, sign-waving families.

He spotted his wife, Rachelle, and their 7-month-old daughter, Alexandra, whom he knew mostly from digital photos e-mailed to him in Iraq.

A bear hug and a smooch for his wife, then Grossman gently planted one kiss, and another, on the cheek of his bemused daughter. It was a moment he had anticipated since Feb. 10, when his Apache helicopter unit &#8212; the 11th Aviation Regiment &#8212; left for war on a damp, snowy morning much like this one.

They are among the first soldiers to return to Europe after serving one-year tours in the Middle East. Lt. Col. Dan McLean, 11th Regiment&#8217;s deputy commander, said hundreds more soldiers will return home between now and mid-February.

McLean said the troops will work half days the next seven days dealing with personal medical, dental, legal or financial issues created by their absence. Then they get 30 days of block leave, followed by 180 days of retraining.

The units of Task Force 11th Aviation left in early February to Camp Udairi, Kuwait, then a crude desert encampment only a few weeks old. The pilots of the new AH-64D Longbow Apaches trained hard and fast to fight the war everyone knew was coming.

The first week of the war proved tough, as the task force&#8217;s March 20 mission was scrubbed because of sandstorms, and many of its helicopters were disabled by fierce ground fire in an attack the night of March 23.

The unit rallied as V Corps commanders changed tactics, using Apaches to support ground attacks instead of sending them on deep-strike missions behind enemy lines. After Baghdad fell in early April, the Apaches flew mainly &#8220;stabilization and support&#8221; missions, providing air cover for patrols and assaults.

Though the unit&#8217;s casualties happily remained low, the small Illesheim community grieved over two painful losses. On Sept. 11, Sgt. Henry Ybarra III, a 32-year-old technical supply clerk with the 6/6 Cavalry, was killed at Balad when a tire he was repairing exploded. And on Thanksgiving Day, Lynn Deppen, the vivacious wife of a 6/6 Cavalry pilot, died suddenly at her home in Illesheim.

Task Force soldiers had expected to stay in Iraq no longer than six months, the standard rotation in the Balkans and Afghanistan. In mid-summer they learned they would have to stay one year. The decision sparked anger and resentment among troops in the Middle East as well as families back home.

The excitement of Monday&#8217;s homecoming, and the prospect of more to come, boosted some spouses during an otherwise difficult Christmas season.

The soldiers climbed off the bus in the darkness and turned in their weapons, then marched through the open hangar doors as their friends and family cheered. McLean spoke briefly.

The soldiers and their families ran together in a sea of hugs and kisses, David, Rachelle and Alexandra Grossman somewhere in the middle.

Ask anybody who knew Sgt. Henry Ybarra, they will tell you about his smile.

It was an ear-to-ear grin, one that rarely left his face and lit up every room he entered.

Ybarra was the only soldier killed during Task Force 11th Aviation&#8217;s yearlong deployment that is now almost complete.

But he is one his fellow soldiers won&#8217;t soon forget.

A supply clerk, Ybarra died Sept. 11 at Logistical Support Area Anaconda, the air base in Balad, Iraq, where his unit has been based since last spring.

Ybarra, 32, grew up in Austin, Texas, and joined the Army in 1990 just days after Saddam Hussein&#8217;s Iraqi army invaded Kuwait. He served in Fort Riley, Kan.; Hanau, Germany; and Fort Hood, Texas, before moving with the 6/6 Cavalry to Illesheim, Germany, when the unit redeployed in July 2002 with the new AH-64D Longbow Apache helicopters.

Ybarra served as a technical supply clerk, keeping track of spare parts for the squadron&#8217;s 21 Longbows &#8212; not an easy job during a conflict in which spare parts often are scarce.

At a memorial service in Illesheim four days after his death, Murphy remembered Ybarra as a devout Roman Catholic who rarely missed Sunday Mass, even in a war zone. No less important in his home state of Texas, Ybarra was a devoted fan of the Dallas Cowboys and NASCAR.

Most of all, Murphy said, Ybarra loved his wife, Lilian, and his three children: Alyssa, 12; Gabrielle, 11; and Henry IV, 1, who survived him.