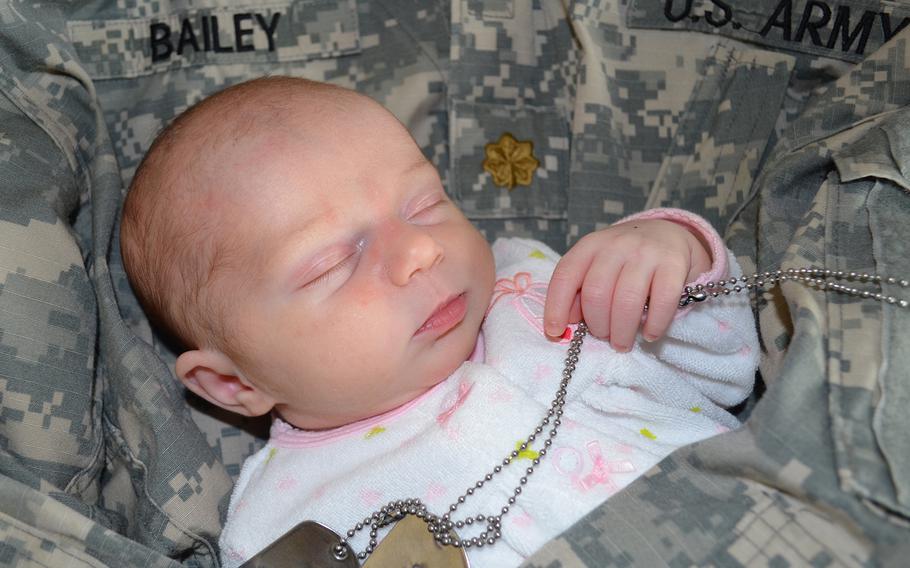 Even before Marc and Sallie Bailey started their ninth fertility treatment, they knew it would be their last.

The couple had spent more than three years and $70,000 trying to conceive. Now they were burning Marc’s military leave to travel 700 miles from Kentucky to New Jersey to work with a private specialty clinic.

They had always wanted to be the kind of military family they saw next door at every new assignment.

But three bases and five doctors later, they’d had enough of the stress and disappointment.

Doctors at the New Jersey clinic recommended new levels for Sallie’s fertility medication and changes to how the embryos would be handled in the lab. They were still hopeful — maybe more so than the couple.

The egg extraction came Oct. 29, 2012 — the same day Superstorm Sandy slammed into the New Jersey shoreline. Not even the weather gave them a break.

Sallie said it was “the lowest part of our journey.”

By late last year, they had an answer. No more waiting, no more disappointment.

Finally, they were expecting.

Violet Ann Bailey was born Aug. 30 — “worth every penny, every injection and every tear,” Sallie said.

“All through it, I worried that she might not really be in there, because of everything we had been through. It wasn’t until the moment I saw her come out that I really believed.”

The Centers for Disease Control and Prevention estimate that slightly more than 1 percent of all children born in America each year are conceived using assisted reproductive techniques.

In fall 2012, Stars and Stripes profiled the couple’s eighth failed fertility treatment and what they called “a special kind of hell” for military couples. Along with the heartache and steep financial costs of infertility problems, couples have to deal with the demands of military life at the same time.

A year later, everything has changed. The couple have traded syringes for baby blankets, stressful, sleepless nights for midnight feedings.

“We don’t get too much crying,” Sallie said. “And when she’s happy, she’s a really happy baby.”

The couple’s happy ending to their infertility struggles comes with a sobering postscript: After years of hoping for a child, now the family has to face the same challenges as other military families.

Marc, 37, could deploy to Afghanistan early next year. Thanks to frequent Army moves, the couple’s nearest relatives are more than a five-hour drive away, leaving them with little support. They’re expecting another assignment and another move next summer.

And their four-year fight to conceive cost them most of their savings, thanks to limits on military health care coverage. If they had private insurance instead of Tricare, it would not have picked up all of the costly fertility treatments, either. But travel expenses to cover trips from their Kentucky base added to the financial burden.

Those sacrifices are common in the military and bring their own levels of stress and tears.

Sallie thinks about what a deployment for Marc could mean, and how she’d cope with raising an infant while her husband is in harm’s way. It’s more stress for a family that’s had plenty already.

But the Baileys say they’re happy to embrace those fears, after so many nights wishing parenting problems could be their top worries.

“I have a beautiful daughter,” Marc Bailey said. “I have nothing to complain about.”

Marc Bailey is still trying to balance his Army career with his role as a new dad.

Most of his unit deployed to Afghanistan this fall. The major was left behind at Fort Knox to help cover jobs of soldiers overseas and to take care of families awaiting to their return. His desire to serve alongside them is tempered by his desire to see his daughter every day.

“I’m conflicted … I love serving, but it does come with its own set of duties and sacrifices,” he said. “But right now, I’m able not to miss out on a lot of firsts with Violet.”

If she had been born a few years earlier — back when the couple first started trying to conceive — maybe his career path would be clearer, or maybe deploying overseas wouldn’t be as complicated.

But Marc said he isn’t bitter, because “nothing good comes of that.” Besides, he noted, his current role helping the families of those deployed takes on a new, personal angle.

Sallie Bailey said she doesn’t dwell on the past, either. She’s still active on online infertility message boards. Before, she was looking for advice and solace from other women. Now, she’s offering comfort and hope where she can.

“If I had known then what it was like to hold her, I would have done anything to get to this point,” Sallie said. “I would do it all again, and more.”