A great day for California GI and Nixon 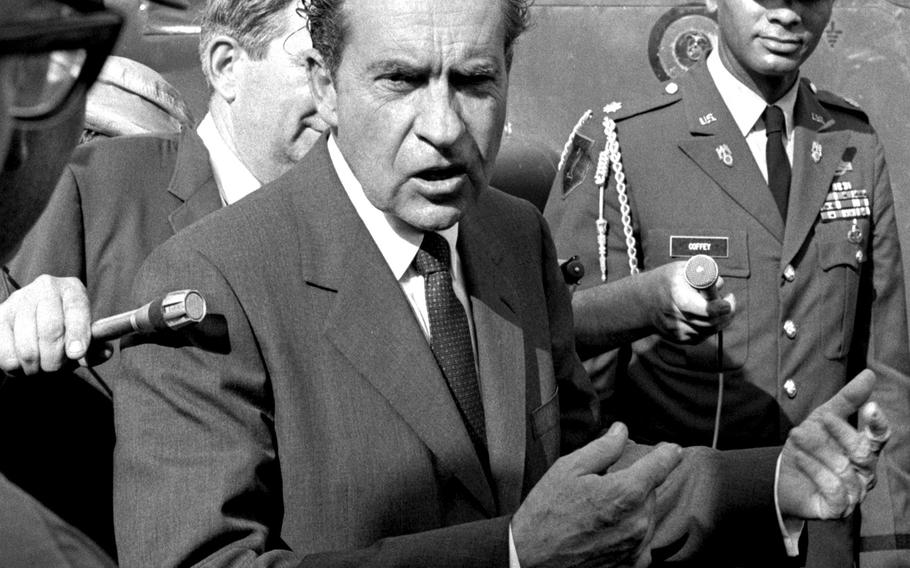 President Richard Nixon talks to reporters in Vietnam in 1969. (Jim Clare/Stars and Stripes)

President Richard Nixon talks to reporters in Vietnam in 1969. (Jim Clare/Stars and Stripes) 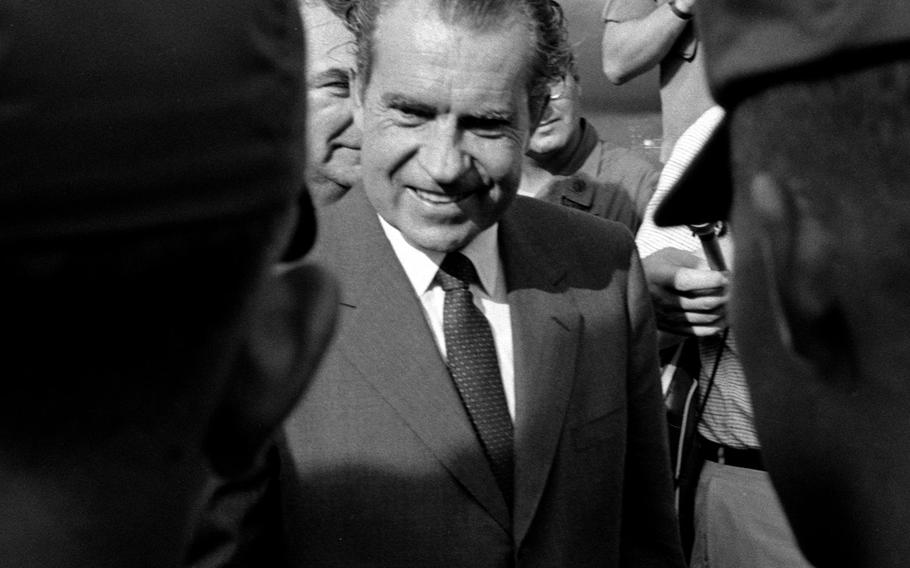 Soldiers in Vietnam meet their commander in chief in 1969. (Jim Clare/Stars and Stripes)

At 12:30 the alert siren started and the soldiers went into bunkers. Three hours later the alert was still on, except for some helicopter people in the 3rd Sq., 17th Cav., and two companies of the 1st Inf. Div.

One company was ready to make a helicopter assault and the other was going on a night ambush. In the meantime they expected some general to inspect them. Then 200 newsmen came, and at 4 o'clock President Nixon arrived.

President Nixon asked the infantrymen, who had been standing in formation, to gather around him, and he talked to them without a microphone. He talked about hometowns and baseball clubs, and walked through the ranks and shook hands. Then he rode in a jeep around the 3rd/17th's helicopters and stopped to talk to more of the men.

When he shook hands with Spec. 4 Gabriel Flores, Flores told him he was from Whittier, Calif.

"Well, that's my home town," Nixon said. "Where did you go to, ah" (Nixon fumbled a bit and looked at Flores, who is short and looks younger than 17) ''ah, high school there?"

Flores told him and Nixon said that's a new one. "I went to the old high school down town," Flores smiled, Nixon stepped back and said, as if to reporters nearby, "Whittier — we didn't set this up, either, did we ... well, we'll both have to get back there, eh, go to Disneyland."

"Yeah, I used to work in Disneyland," Flores said, "my father still works there."

"Well, Disneyland's a great place," Nixon said, "when you talk about it most people think it's just for kids, but it's great. We all ought to go there ..."

Nixon smiled and passed on, and reporters pushed near Flores, asking his age, job, and how to spell his name.

"Just like the angel, eh?" an old reporter asked. Flores smiled, and said he was a crewchief.

"Crewchief," repeated the old reporter, "what unit's that? You look a little Mexican, eh? Mexican-American?" (Flores nodded but didn't answer) "But American born", the reporter said, and Flores said "my grandfather was an Indian."

Then other reporters asked many of the same questions and got his age and name again, and Flores kept on smiling and nodding, and the reporters left.