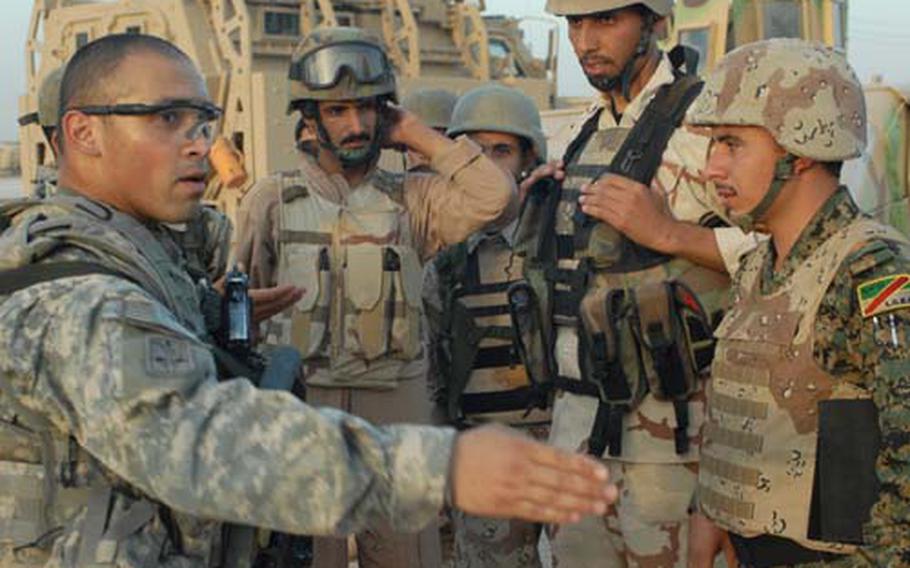 Staff Sgt. Juan Medina-Torres, 32, of Puerto Rico, and others from Task Force 1st Battalion, 2nd Infantry Regiment, shown on June 26, are training Iraqi security forces in the Najaf area, but the trust between the two groups is still growing slowly. (Seth Robson / S&S)

NAJAF, Iraq &#8212; The security agreement requiring U.S. units to pull out of Iraqi cities relies in large part on trust that the Iraqi security forces can protect U.S. soldiers and civilians when they do go into town, military officials say.

But American troops, who have closed their last outpost in this city of almost a million Shiites, could be excused if they do not entirely trust local police. U.S. soldiers report seeing police taking cover seconds before a roadside bomb detonated on the main road into town in May, striking a U.S. vehicle carrying Cpl. David A. Schaefer, 27 of Belleville, Ill.

The father of three, known as "Schaf" by his friends, died May 16 in Baghdad of wounds suffered in the attack, according to a Department of Defense press statement.

The man in charge of U.S. troops in Najaf, and neighboring Qadisiyah province, said this week that the Najaf police were clearly implicated in the bombing.

"[Iraqi police] were 100 meters away from the site of the attack," said Lt. Col. Steve Miska, commander of Task Force 1st Battalion, 2nd Infantry Regiment. "Some of them were hiding behind buildings waiting for the bomb to go off."

Weeks have passed but Iraqi authorities claim little progress in their investigation.

"Nobody has been arrested or detained as a result of it," Miska said. "That creates a whole lot of frustration."

The task force is putting pressure on Najaf&#8217;s newly elected provincial government and the police to bring the perpetrators to justice, he said.

These days, the Miska&#8217;s soldiers are training Iraqi security forces, providing them with intelligence and other assistance when it&#8217;s requested and escorting U.S. State Department provincial reconstruction teams.

So far, several police chiefs in Najaf have been fired due to "a perception that they are sheltering elements of the militia," Miska said, but he added that he&#8217;s not sure if anyone will face charges over the May bombing.

Under the security pact between the two countries, American forces were required to pull back from cities by June 30.

"The Iraqis&#8217; part of the security agreement is that they are responsible for securing our forces," he said. "When my PRT goes into Najaf, my soldiers will be with the PRT but they will be escorted by the IP (Iraqi police) and the IA (Iraqi army)."

In those days, he said, the unit was blasted daily by roadside bombs and small-arms attacks.

Carlsrud said the three soldiers from the battalion who fatally shot four suspected insurgents on a riverbank in spring of 2007 did so after dangerous insurgents captured by the unit were continually released from detention centers for lack of evidence.

"It&#8217;s probably even more frustrating now," Carlsrud said. "Back then [if a soldier was killed by a roadside bomb] you could go make a target packet, go and do a raid and hopefully capture or kill the guy who did it. Now everything is under Iraqi control. I have to put my faith in the IP to do the right thing and arrest the guy who is responsible. For a lot of the guys, it&#8217;s very frustrating."

Pfc. David Kirkland, 19, of Dothan, Ala., said the Iraqis have taken over the security mission but are not up to U.S. standards yet.

"We are a lot more disciplined," Kirkland said. "We have more technology and, I think, more willpower trying to get stuff done here."