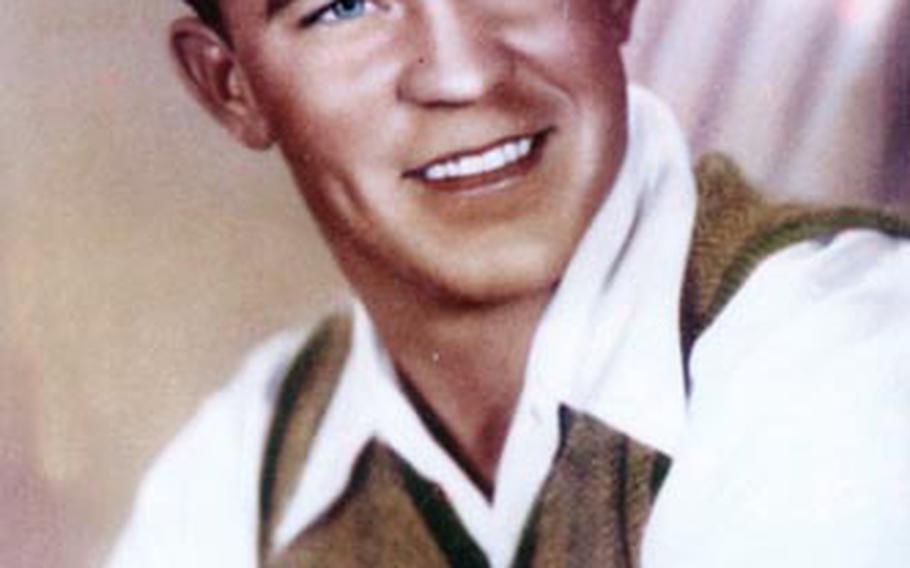 A 1943 college portrait of WH "Dub" Jackson during his freshman year at Hardin-Simmons College in Abilene, Texas. (Photo courtesy of WH Jackson) The Rev. Dub and Doris Jackson stand behind a pulpit at the Hotel New Otani Tokyo, but certainly don&#39;t try to give visitors a "holier-than-though" impression. "We like it when people feel comfortable around us," Doris said. (Paul Newell / S&S) 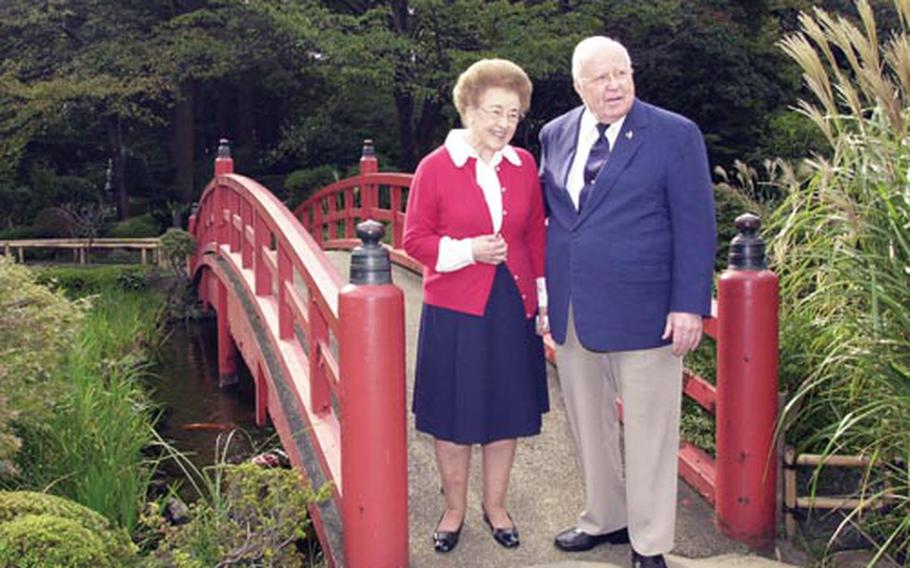 Standing for a portrait, Dub and Doris Jackson take the opportunity to invite a trio of Korean passerbys to their chapel for a visit. (Paul Newell / S&S)

On a fall evening in 1950, the Rev. William "Dub" Jackson lay awake on his futon, unable to get over the irony.

However, the only thing separating him that evening from Cmdr. Mitsuo Fuchida &#8212; the Japanese pilot who led the attack on Pearl Harbor and radioed the notorious go-ahead "Tora! Tora! Tora!" transmission &#8212; was a thin screen of shoji paper. Fuchida, a recent convert to Christianity, had accompanied Jackson to Nagoya to share the gospel with other Japanese.

"At the time, it was startling," Jackson said 58 years later in an interview last week with Stars and Stripes. "But now I just think it was God showing how his love could bring any two people together. The Japan that was once my sworn enemy has brought me many of my greatest joys."

An unfortunate visit to Japan

Growing up in a sleepy town south of the Texas panhandle, Jacksonfs first joys were his parents, flying and God. The son of a pastor, he said he didn&#39;t have a lot of material comforts growing up, but for his 12th birthday "my parents paid $2.50 so I could have a plane ride," Jackson said. "From that day, I was hooked on flying."

When Japan attacked Pearl Harbor in December 1941, Jackson volunteered for duty. Too young to fight overseas, the 17-year-old was allowed to serve in the Army Air Corps Reserve while attending the Baptist-run Hardin-Simmons University in Abilene.

The day he was called into service in 1943 is one he recalls with a grin.

"Someone from across the campus shouted that my unit had been called to service. Man, I threw my books in the air and was gone. For all I know, those books are still there."

At Clark Air Field in the Philippines, the brash Texan made up his mind to fly what he believed was the best fighter &#8212; the twin-engine P-38 Lightning &#8212; and with the Pacific&#39;s most successful P-38 squadron, the 49th Fighter Group. By the end of the war, the unit would down a record 678 enemy aircraft.

Today, Jackson, 84, says he is glad he still has all his digits, since he needs each to count the times he nearly died piloting the P-38. Flying bombing and strafing missions alongside some of the war&#39;s best pilots, he would dart toward Japanese targets while anti-aircraft shells burst all around.

"I was nervous but glad to be a part," Jackson said.

Glad, perhaps, but he knew he would have to face his biggest fears as the 49th pilots prepared to invade mainland Japan, a kamikaze tasking in its own right.

"We were called in by our commander, who made it very clear that many of us would not survive our bombing mission of Kyushu," Jackson said.

Just before the planned invasion, the atomic bombings of Hiroshima and Nagasaki hastened the end of the war.

The 49th&#39;s integral role in defeating the Pacific earned its members a great tribute when the squadron was handpicked by Gen. Douglas MacArthur to serve as his air escort to accept Japan&#39;s surrender. On Aug. 30, 1945, 20-year-old Lt. Dub Jackson joined the famous general and other squadron members as the first Americans to touch down on post-war mainland Japan.

Driving in his Jeep from Atsugi, Jackson remembers looking around the once-proud Yokohama and Tokyo cities and seeing "nothing but smokestacks, rusted safes and burnt-out buildings in every direction." The two urban areas had been flattened by the May 1945 firebombings. To this day, he recalls being the only driver as his Jeep rumbled along Tokyo&#39;s now-bustling Aoyama Boulevard.

Amid the devastation, Jackson realized he had a rare chance to reach out to a people in need. In little time, he met six Christian missionary women just released from a Japanese concentration camp who introduced him to Japanese Christians. On one occasion, Ugo Nakada, a church music leader, took Jackson into the Shinjuku station tunnel at night to view the homeless masses huddled on wet tiles.

"As we carefully tiptoed across the women and children," Jackson said slowly, "Mr. Nakada told me that American trucks would be by in the morning to remove all those who died from starvation and exposure. It was a day of great need."

To help meet those bare necessities, Jackson turned to his squadron commander, Col. James Watkins, who agreed to provide transportation for Jackson&#39;s new missionary undertaking so long as he didn&#39;t shirk his surveillance patrol flights. Jackson and squadron pal Roger Fox teamed up with the Japanese missionaries "to provide blankets, food and the message of God to a spiritually starved people."

Jackson says he was shocked at how kind the Japanese were to American troops, who had been their enemy only a few days earlier. The first time Jackson went to a Shinjuku prayer meeting, he was introduced to the defeated Japanese as a guest.

After saying an emotional goodbye in January 1946, Jackson went home to Abilene to finish school. Though he says his heart was moved in the short time he lived among the war-torn people, he was confident he would not return.

Jackson rejoined Hardin-Simmons with the intent of becoming a Christian missionary. He rekindled a friendship with his old schoolmate Doris, and in 1947 the two were married.

After Jackson graduated in 1951, his church sent him and Doris to Japan. They began two years of Japanese language school that Jackson said he disliked immensely. Yet, he knew that to help the Japanese learn about Jesus, he would have to know their native tongue. Their first assignment was in Asahikawa, Hokkaido, said to be the coldest place on the island nation.

In 1957, the couple were in Tokyo after a furlough when Jackson was asked to start a new church for English speakers in the capital. To say he wasn&#39;t happy with the idea would be an understatement. Dub and Doris had enjoyed a wonderful three years building and shepherding a Japanese-speaking church in Asahikawa and were looking forward to more of the same.

"Not only did I want to continue preaching in Japanese," Jackson said, "but Americans already had several chances to hear and accept the gospel."

Begrudgingly, he accepted the assignment and gathered up the mostly military families who were going to help him. Jackson&#39;s message was clear: "I told them if we are going to build a church for God in Tokyo, it&#39;s going to have to be the best we can do. It would take total commitment."

Jackson said the group had the answer for his challenge when 27 original members took a leap of faith to raise the $165,000 needed to build Tokyo Baptist Church in Shibuya. One family donated its Buick convertible. An Army major donated $8,500, while another major, two Army sergeants and their families became the crux of the church administration.

"We prayed that the Lord would do great things with TBC, and when the 5th Air Force band and American ambassador to Japan, Douglas MacArthur II, were on hand to dedicate the building in November 1959, I knew that prayer had been answered," Jackson said. "It is wonderful to know that today the church is home to more than 1,000 members, and that roughly half of that number is Japanese."

Even after the couple left TBC, they continued to organize churches. In 1967, Jackson was enjoying the beautiful 10-acre garden at the New Otani Hotel Tokyo when he decided to pitch a bold initiative to Otani management: If he could raise $500,000 for the hotel, would they be willing to build a chapel in the beautiful garden. To his amazement the hotel refused the money but agreed to a glass eight-sided chapel that still graces the garden.

Though Dub and Doris haven&#39;t slowed much since they began their work more than 60 years ago, the couple is unsure how much they have left in the tank. Though they live in Abilene, the Jacksons spend a month of each year pastoring at the Hotel New Otani chapel.

After they leave Japan this month, they will attend another church event in Hong Kong. Over the years, the couple have worked in more than 50 countries.

But medical issues have been mounting. Jackson has battled leukemia for five years and must take medications that make his body swell. Recently, Doris had a weak spell and will be examined by her physician when she returns to Dallas later this month. Both use canes.

"Sure, I&#39;m getting old, but I&#39;m still motivated by something an 82-year-old missionary said to me shortly after the war ended," Jackson said. "I was driving Mother Tops to a church meeting at Tachikawa Air Base and apologized for dragging her to the base in an open Jeep in the January cold. That&#39;s when she turned to me and said, "Young man, it is not the cold on the outside that keeps us from serving; it is the cold on the inside."