A family broken by war 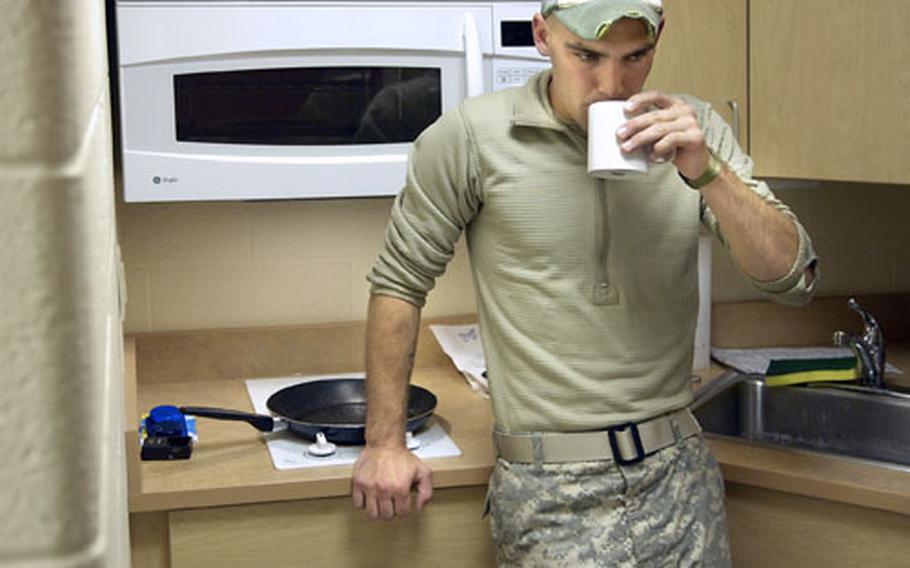 Spc. William Medlin is cooking himself some bacon and eggs in his unexpected new home, the barracks.

When he left for Iraq 14 months earlier, he lived in a house with a wife and three kids. That&rsquo;s all over now.

"We grew apart," Medlin said. "My outlook on life changed a little bit. I re-enlisted for six years because [being a soldier] is what I love. I guess it didn&rsquo;t suit."

He&rsquo;s in the kitchenette, just steps away from the bedroom, with its single bed and a bottle of Crown Royal on the windowsill. It&rsquo;s a week since he got back from Iraq.

Medlin is 22, a preacher&rsquo;s son, one of four, from a small North Carolina town, and a proud country boy who enlisted a year after he got out of high school. He became a mortarman. Three years ago, still a teenager, he married a woman five years older with three children &mdash; two girls and a boy, now ages 6, 9 and 11.

The couple had problems on and off, he said. Then on his R&R in February, there was more conflict.

"We kind of clashed," he said. "I wanted to stay in; she wanted to go out. I wanted to help out with the kids &mdash; I was Daddy the whole time we were together.

During the last part of his deployment, if Medlin was off-duty, he was on the phone, other soldiers said.

When he was on-duty, life was good.

"People change, even here. We probably shouldn&rsquo;t have gotten married. It was one of those young, dumb, lustful things."

Was the Medlin marriage doomed from the start? Or was it his deployment &mdash; the separation, the changes that occurred in both people, the thoughts of others that ended it? No one can know for sure; experts say deployments are hard on many marriages but provide breathing space for others.

Medlin said he really knew his marriage was over during a phone conversation in August.

"I was back from the patrol base &mdash; she said she actually noticed big changes in me. Changes in my personality. I don&rsquo;t notice them, myself. I&rsquo;m a pretty straightforward person, pretty levelheaded. Sometimes brutally blunt. I&rsquo;m like a cougar when pushed in a corner," he said.

"She told me she was deciding whether to stay with me or not. I told her I&rsquo;d get the paperwork drawn up the next day. If it&rsquo;s already in your mind, you&rsquo;ve been thinking about it.

"I didn&rsquo;t stop caring. It just sunk in that it was over. I gotta pack up what I got and truck on."

When Medlin returned, he went to the house to get some of his things, take his car and check in.

"It was kind of ugly. There were a couple of people over there I didn&rsquo;t approve of," he said. "There wasn&rsquo;t much of a confrontation."

A couple of days after his return to Fort Drum, Medlin said, he discovered that his wife had started an Internet romance with another soldier.

"She&rsquo;s actually dating one of my friends," he said. "It&rsquo;s OK. I&rsquo;m trying to be the bigger person."

And he also started a new romance with a woman in Syracuse that he met online. She came to the welcome-home ceremony, along with Medlin&rsquo;s dad. Her photo is up in his bedroom.

"She&rsquo;s nice and easy to talk to," he said.

It upsets him that his estranged wife is still receiving money and benefits, that she is in the house and he has to find an apartment.

"She&rsquo;s living in a house I&rsquo;m paying for," he said. "And her boyfriend is staying over. It&rsquo;s very trying."

In May, Medlin is to move to Fort Stewart, Ga. When he re-enlisted, he was guaranteed a spot in air assault school and given a $10,000 bonus. He&rsquo;ll be glad to be back in the South, he said, closer to his family.

As for the family he married into, he said, "We just changed, grew apart. There&rsquo;s nothing you can do about it."