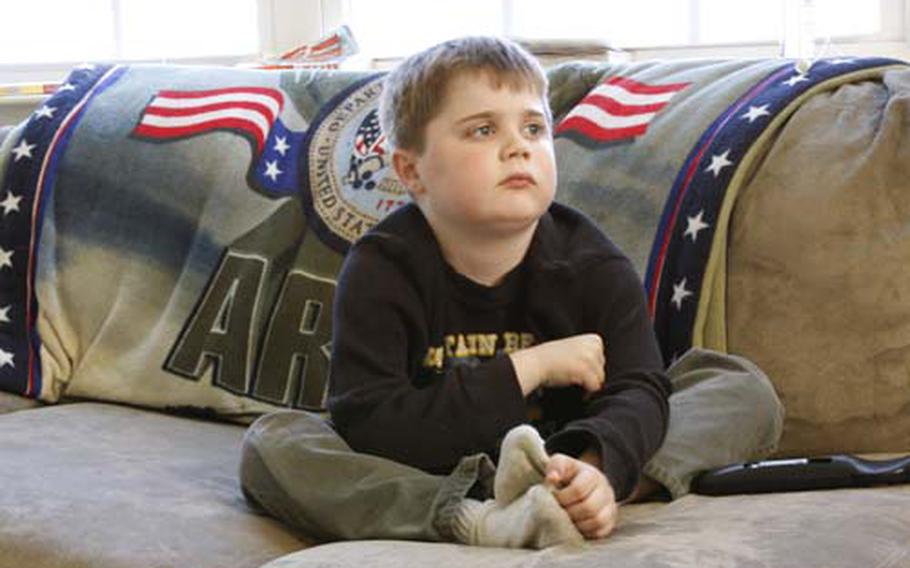 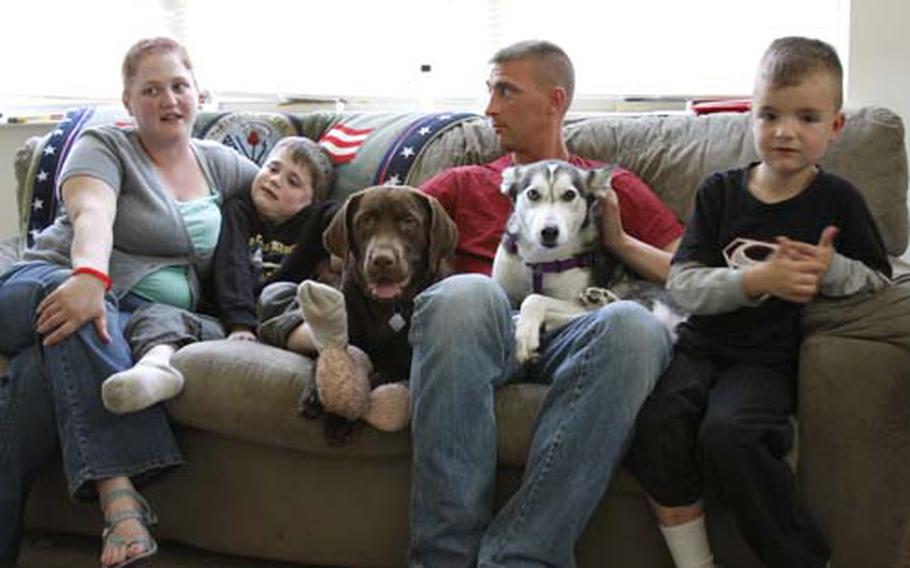 From left, Lynn, Jacob, Chris and Steel Bartels sit in their Fort Drum, N.Y., home. While her husband spent 14 months in Iraq, Lynn was the sole parent for Jacob and the couple’s adopted son, Steel, while working full time and running the Family Readiness Group. (Joe Gromelski / S&S)

After fighting for more than a year in Iraq, Sgt. Chris Bartels found himself in another battle after he came home.

This time, it was with the Army.

Along with his wife, Lynn, Bartels had to fight with the Army and its insurance company, Tricare, to get the best available medical treatment for their 8-year-old son, Jacob.

A few months before Bartels deployed to Iraq, the couple learned that Jacob suffers from Duchenne muscular dystrophy, an inherited muscle-wasting disease that afflicts mostly boys, confining them to wheelchairs by their teens and usually killing them before they&rsquo;re 30.

It&rsquo;s hard knowledge for any parent to bear, and the Bartelses hope for a cure. But in the meantime, they are fighting for what medical science can offer to keep their son as healthy as possible for as long as possible.

The Army has not made it easy.

Many doctors assume there is little that can be done for DMD patients. But Cincinnati Children&rsquo;s Hospital Medical Center in Ohio, Lynn read, is one of the few places that has started focusing on therapies to try to manage the disease and extend their patients&rsquo; lives.

The couple already pays out of pocket for some of Jacob&rsquo;s medications that Tricare doesn&rsquo;t cover. Lynn asked Tricare to cover visits to the Cincinnati hospital.

"We submitted letters, made phone calls," Lynn said. "It was &lsquo;No&rsquo; automatically. They said Jacob could be treated by doctors in Syracuse."

While her husband spent 14 months in Iraq, Lynn, 29, was the sole parent for Jacob and the couple&rsquo;s adopted son of about the same age. She worked full time, and she ran the Family Readiness Group. She might be softspoken. But she is no pushover.

She&rsquo;s been frustrated with how little her military health care providers know about her son&rsquo;s disease and how difficult it has been to get good answers. When Jacob started falling down at about age 4, she said, her pediatrician told her she was worried about nothing.

"It was, &lsquo;Oh, he&rsquo;ll be OK. Just put him in gymnastics&rsquo; " she said. "And that was the worst thing for him."

So she&rsquo;s used to questioning the first answer she receives, including the denial from Tricare. Syracuse, the nearest city to Fort Drum and an hour away, did not offer Jacob the care he needed. "I said, &lsquo;It&rsquo;s not treated by just one doctor. It&rsquo;s a team. And his doctors in Syracuse don&rsquo;t talk to each other,&rsquo; " she recalled.

"I explained it in a different way. It could allow him to walk longer, improve his quality of life. It&rsquo;s a big deal."

Jacob needed her to be persistent, she said.

"I don&rsquo;t want him to look at me and say, &lsquo;You didn&rsquo;t try.&rsquo; "

Tricare was finally convinced. The Bartelses could take Jacob to the Cincinnati medical center twice a year so that doctors there could assess how he&rsquo;s doing and what sorts of medications and therapies should be tried.

But the Bartels family&rsquo;s problem was not solved. They had orders to move to Fort Bliss, Texas, and that regional Tricare office would not cover care in Cincinnati. "The only way they&rsquo;d friggin&rsquo; help us is if we stayed here," Bartels said.

So Bartels put in a Form 4187 to the Human Resources Command, asking for a deletion of orders so he could be assigned to a Fort Drum unit.

Once again, he received an abrupt "No."

"The sergeant major (of the HRC) put it in words like, &lsquo;Take a jump off a pier and don&rsquo;t mess with my numbers,&rsquo; " Bartels said.

Bartels, 32, said it was strange being denied permission to stay at Drum, which is not among the Army&rsquo;s top destination posts. He said the Human Resources Command seemed to think he wanted to remain at Drum to avoid deploying again.

"I felt like the Department of the Army was strong-arming me," he said.

But his unit came through for him. His own sergeant major started making phone calls. "He dropped everything he had to help me out," Bartels said.

Finally, after filing another 4187, Bartels&rsquo; orders to Fort Bliss were deleted and he was allowed to remain with the Triple Deuce. That gives Jacob at least two years to be seen at the Cincinnati hospital.

Chris and Lynn have been married less than a decade, but already they&rsquo;ve experienced more stress than many couples endure in a lifetime.

The couple adopted one of Bartels&rsquo; sister&rsquo;s children, who were all about to be removed by the state of Nevada because of neglect. The boy, a few months younger than Jacob, has struggled with anger and has been diagnosed with attention deficit disorder.

All of which means that Bartels&rsquo; combat-related stress symptoms are not a big problem in the household.

He doesn&rsquo;t like it when balloons pop, so he goes outside at birthday parties. He doesn&rsquo;t like big groups of people, so they avoid them. And on a wintry night driving home after a movie, when someone started shooting off fireworks and Bartels experienced a flashback, his wife was impressed, not upset.

&ldquo;The fact that he managed to pull over &mdash; it was icy &mdash; was pretty impressive, really,&rdquo; she said.

Having Bartels home again has been a pretty easy transition.

&ldquo;He doesn&rsquo;t put the dishes away where they go,&rdquo; Lynn said. &ldquo;I think that was the only thing I got irritated about, because I couldn&rsquo;t find anything.&rdquo;

More troubling is the fact that Bartels has not yet been recommended for a promotions board to make staff sergeant. Formerly a Marine, he&rsquo;s planned to make the Army a career, but if doesn&rsquo;t get promoted by 2011, he&rsquo;ll be discharged, he said.

For now, the family is battening down for Bartels&rsquo; next deployment, looming in the few months.