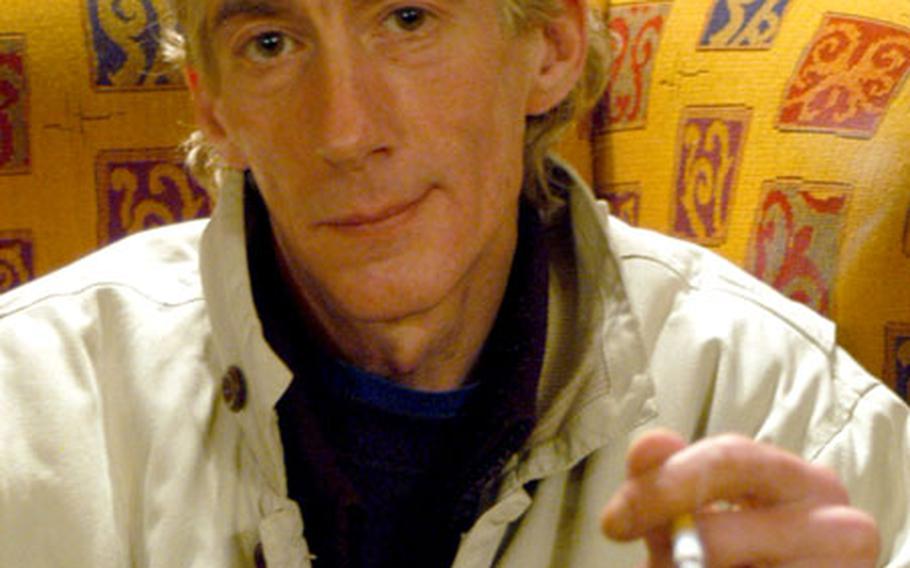 “What this is trying to do is force it on you,” Paul Thompson, a resident of Beck Row near RAF Mildenhall, said about the potential nationwide smoking ban in 2007. “It’s not freedom of choice.” (Ben Murray / S&S)

RAF MILDENHALL &#8212; American Air Force spouse Jamie Evers has an interesting position in the debate over smoking in public places in England.

An off-and-on smoker for 15 years (now three weeks on the wagon), she backs an English bill currently in Parliament to ban smoking in public areas by next year. Though she has enjoyed a Marlboro or two over a pint at a pub in the past, she doesn&#8217;t like the smell of cigarette smoke and supports a measure to make it an outdoors-only practice by 2007, she said.

On Feb. 14, the British House of Commons voted to pass a public health bill banning smoking in all &#8220;enclosed public areas&#8221; in the country, said a spokeswoman for the English Department of Health, which sponsored the bill.

If it makes it through the House of Lords in coming months without major problems &#8212; which is likely, according to the health department spokeswoman &#8212; by mid-2007, England could follow European countries such as Ireland, Italy and Scotland with a total indoor smoking ban.

People will still be able to smoke at home and in military barracks, prisons and hotel rooms, but traditional smoking venues such as clubs and bars would become nonsmoking venues.

That&#8217;s a tough pill to swallow for local pub managers, who say the smoking ban will devastate their businesses by carving off part of a treasured piece of British culture: the hazy local pub.

Davida Brown, manager of The Globe pub in Mildenhall, had similar thoughts about the impact of a ban, saying small establishments may face closure if their regulars shorten their visits to the pub.

Despite English pub owners&#8217; fears, studies in the United States have shown that business in bars and restaurants did not decline after smoking bans, according to news reports. Smoking has been banned in such cities as New York, Washington, Boston, Los Angeles and San Francisco.

Regardless of the economic impact, Air Force anti-smoking counselors say the health benefits of banning smoking from public venues are myriad.

According to the Centers for Disease Control and Prevention, the percentage of U.S. adults who smoke cigarettes continues to decline and more adults have successfully quit smoking than remain smokers.

Propagating a shift in cultural attitudes can be a frustrating process that&#8217;s &#8220;never liked initially,&#8221; but the negative health effects of second-hand smoke are well-documented, Moore said.

And, for smokers trying to quit, traditional English hangouts such as bars, pubs and clubs can be trigger areas that can tempt them to have a drag, Moore said.

Senior Airman Misty Horton, a tobacco cessation counselor and former smoker at RAF Alconbury, said she found it hard to go to smoky bars when she was trying to kick the habit.

For servicemembers in the United Kingdom, the new law may actually end up looking much like the policy on tobacco use they work under. The policy &#8220;prohibits indoor tobacco use in all Air Force facilities,&#8221; according to Air Force Instruction 40-102.

Smoke-free venues are familiar to many Americans, which might help pick up any lag in business at small bars and restaurants once the ban hits, some servicemembers said.

Moore, who has a daughter, said he would &#8220;definitely go out more, without question,&#8221; if venues around him were nonsmoking.

The top five cigarette-smoking countries in the world

(with number of cigarettes consumed in 1998):

Worldwide, more than 15 billion cigarettes are smoked per day.

Percentage of adults who smoked

Average number per day for all adult smokers: 15 for men, 13 for women