A different atmosphere at Frankfurt's exchange 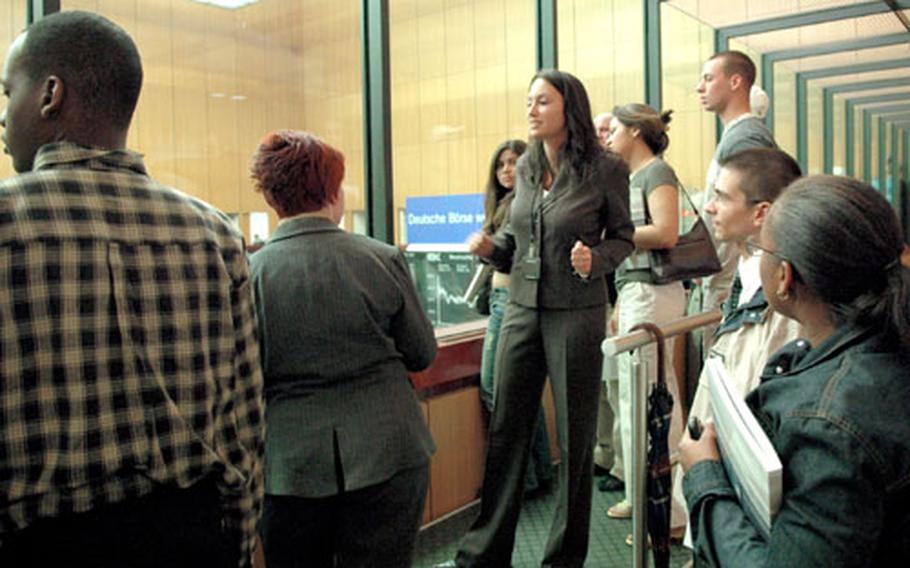 Rebecca Schmidt, center, of the Deutsche Börse legal department explains the Frankfurt stock exchange floor to University of Maryland students during their tour of the exchange. (Michael Abrams / S&S)

FRANKFURT, Germany &#8212; Sean McAnarney, one of the stars of George Neblett&#8217;s Economics 201: Macroeconomics class, showed up Friday for a tour of the Frankfurt stock exchange dressed in a businesslike dark suit and tie.

Eschewing the Wall Street blazers and slacks, German market support personnel in T-shirts and jeans pecked occasionally at keyboards in between sips of beer, the only noise coming from a few monitors showing &#8220;The Simpsons.&#8221;

The Frankfurt exchange differs from American exchanges in many ways, but most profoundly and deceptively in that there&#8217;s not much to see because most trading is automated.

The Frankfurt exchange can, because of its Xetra platform, handle 40,000 trades per second, said Schmidt, who gave Neblett&#8217;s class an in-depth briefing on the exchange.

The deceptive quiet and the workers&#8217; casual wear aside, understanding markets &#8212; particularly this one &#8212; is the stuff of doctoral theses. Trading in Frankfurt, the largest German exchange, represents about 95 percent of turnover in this, the world&#8217;s third largest economy. Regional markets such as Berlin and Munich give only 5 percent of the action, Schmidt said.

There are a lot of moving pieces, and Schmidt gave UMUC students a detailed explanation of where Deutsche B&#246;rse AG, a publicly traded company that owns the exchange, ends, and where FWB Frankfurt Wertpapierb&#246;rse &#8212; the exchange itself &#8212; begins. Deutsche B&#246;rse Group has about 3,000 employees in Germany, Luxembourg and other countries.

Schmidt gave the students a surprisingly candid explanation of how the cash-rich Deutsche B&#246;rse&#8217;s failed takeover of the London Stock Exchange cost both the Deutsche B&#246;rse chairman and chief executive officer their jobs last month.

When the U.S. catches a cold, Germany gets pneumonia, Neblett said. But so far, American hurricanes and energy shortages haven&#8217;t dented European stocks, which closed Friday at a 40-month high.