A day in the life of a Navy wife 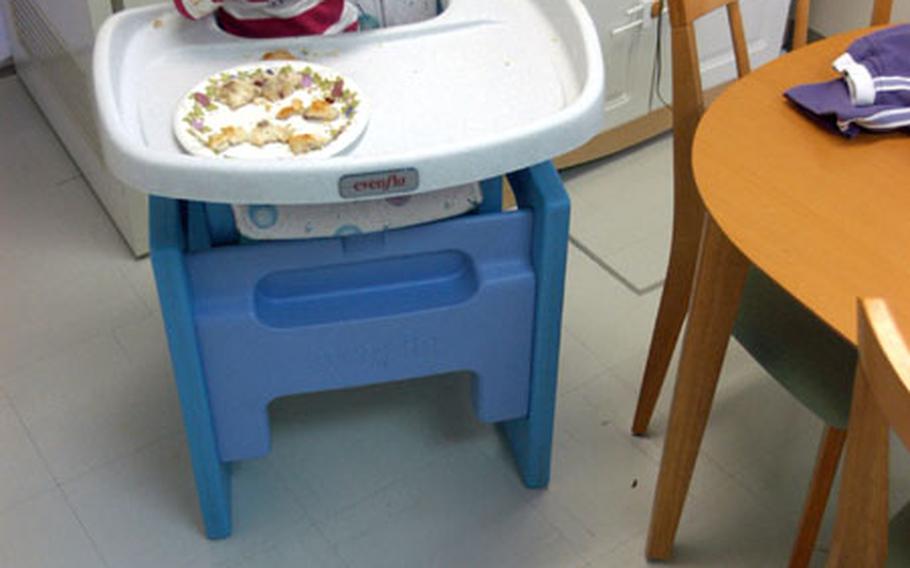 Mercedes Williams makes the most of her meal while eating breakfast. Her mother, Cindy, is playing both mom and dad while husband, Andrew, is deployed with the USS Kitty Hawk. (Doug Huddy / S&S)

Mercedes Williams makes the most of her meal while eating breakfast. Her mother, Cindy, is playing both mom and dad while husband, Andrew, is deployed with the USS Kitty Hawk. (Doug Huddy / S&S) 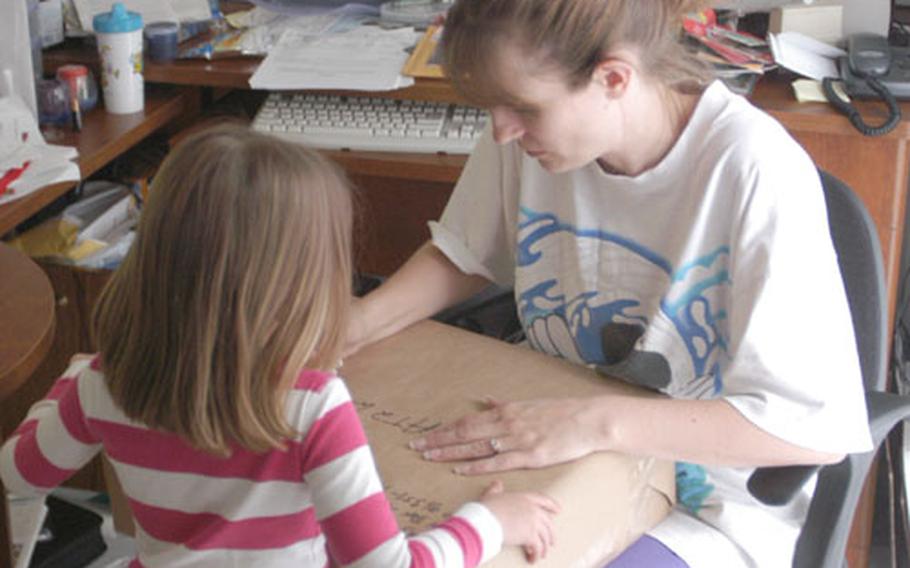 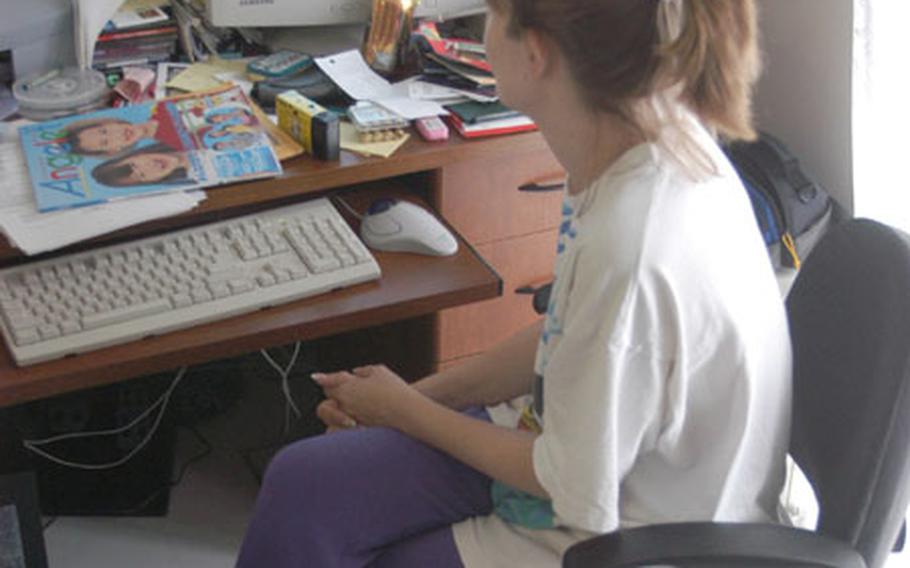 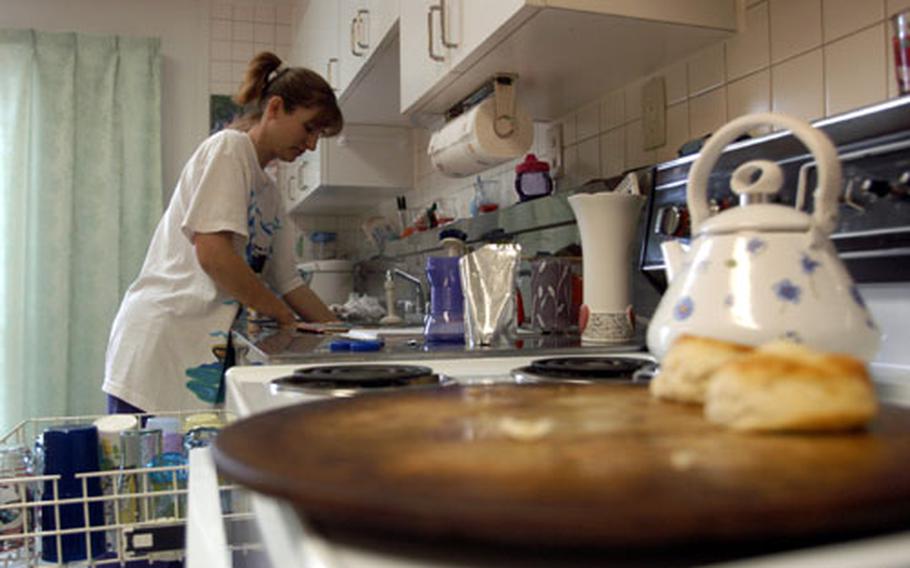 At 8 a.m., an inaudible garbled voice came through the baby monitor in Cindy Williams&#8217; living room.

This is the official start of Cindy&#8217;s workday.

She is the wife of USS Kitty Hawk sailor Andrew Williams, a petty officer second class who spends much of his time away from the family.

He has to because his country needs him.

But that need leaves Cindy &#8212; and thousands of other spouses just like her &#8212; to play both mom and dad in a temporary one-parent home.

Her husband has been gone since Jan. 20. His ship supported Operation Iraqi Freedom in the Persian Gulf and now is heading home.

Cindy&#8217;s workload doubles in minutes as her 4-year-old daughter, Miranda, gets up. They are two young kids with two empty bellies, and Cindy means to take care of that. But first, they both give mom a good-morning kiss.

While she fixes biscuits with butter and jelly for breakfast, Tracy Johnson and her 14-month-old daughter, Arielle, ring the doorbell. They are the first of many ship spouses Cindy will see throughout the day &#8212; planned or unplanned.

Tracy is dropping off &#8220;Kitty Hawk Welcome Baskets&#8221; for Cindy to distribute to newly arrived spouses. Cindy takes the packages with a smile and waves goodbye.

She serves up the morning chow; the kids sit for breakfast. This also gives Cindy time to enjoy her French vanilla coffee and jump on the Internet; her husband may have written.

Even toddler Mercedes gets typing time, he says. &#8220;She just bangs away at the keyboard. It looks like the Tasmanian Devil talking.&#8221;

He&#8217;s turning 35, Cindy says, but it&#8217;s just another of many significant personal events that duty and deployments have forced him to miss.

The couple has no regrets about Andrew joining the Navy. Actually, it was Cindy&#8217;s choice; she put him in the Navy because his job at Auto Zone had him on the road Monday through Friday.

&#8220;My wife got tired of it, so she went and talked to the detailer and I had an appointment the Saturday I got back. She did everything but sign the paperwork,&#8221; Andrew says, smiling.

The day&#8217;s first stop is Ikego Housing&#8217;s MWR office, where Cindy wants to sign up Miranda for the next soccer season.

Next stop is Ikego&#8217;s post office, where Cindy is sending a care package to Andrew.

&#8220;I don&#8217;t like boat coffee,&#8221; Andrew says. Cindy probably wouldn&#8217;t be too happy to know Andrew usually works out instead of eating lunch; he usually eats only once a day. Along with the snacks she sends Dean Koontz books and non-chocolate candy; chocolate melts while sitting in boxes in the Middle East.

A recent package had photos of Cindy and the girls.

Andrew had been worried that Mercedes wouldn&#8217;t remember him. Then Cindy told him about how one day she walked downstairs in his T-shirt and Mercedes ran to her saying, &#8220;Daddy, Daddy, Daddy!&#8221;

Cindy doesn&#8217;t have a baby sitter, so the kids accompany her &#8212; and rend the air in the clinic lobby with screeches, yelps and tears, always followed by stern instructions from their mother. Cindy chases down a screeching Mercedes and calms Miranda with a stuffed toy puppy, before herding them into the examination room.

Cindy didn&#8217;t hear the comment but told about it later, she was visibly bothered.

Next stop: the Navy Lodge. Cindy is dropping off the welcome baskets to new families just arriving.

Cindy said it was a surprise, but the visit comes during a lull in activities &#8212; which raises questions about how unplanned the ice cream stop is.

At the food court, she runs into Sharon Lakin and her toddler son, Jacob. They&#8217;re taking an ice-cream break, too, that&#8217;s doubled as a photo pickup.

After reading through the poem a few times &#8212; and cleaning strawberry ice cream from Mercedes&#8217; face &#8212; Cindy packs her things to meet with Tanya Astorga, another ship wife who will watch the kids while Cindy is in class.

However, Cindy says, other Navy spouses certainly lend support &#8212; help that allows Cindy to concentrate on college classes despite her husband&#8217;s absence.

Later, she says she thinks she did well on her poem test. Her grade: a 90.

After collecting the kids from Tanya&#8217;s house, Cindy puts them to bed at home around 10:45 &#8212; leaving her time to check her e-mail in-box once more before hitting the sack.

It&#8217;s a nice send-off for an average day in the life of Cindy Williams.

Thousands of miles away, from his temporary home on a floating city with 5,500 others, Andrew is at work in a chilly room, repairing the laser-guidance system for bombs on F/A-18 Hornets. The aviation electronics technician goes to the nonsmoking area a few times a day to see the sunlight and get a break from his 12-hour workday.

They&#8217;re welcome surprises to his routine of sleeping, working and exercising.

But before closing his eyes he speaks to the dozen or so photos of his family in his rack.