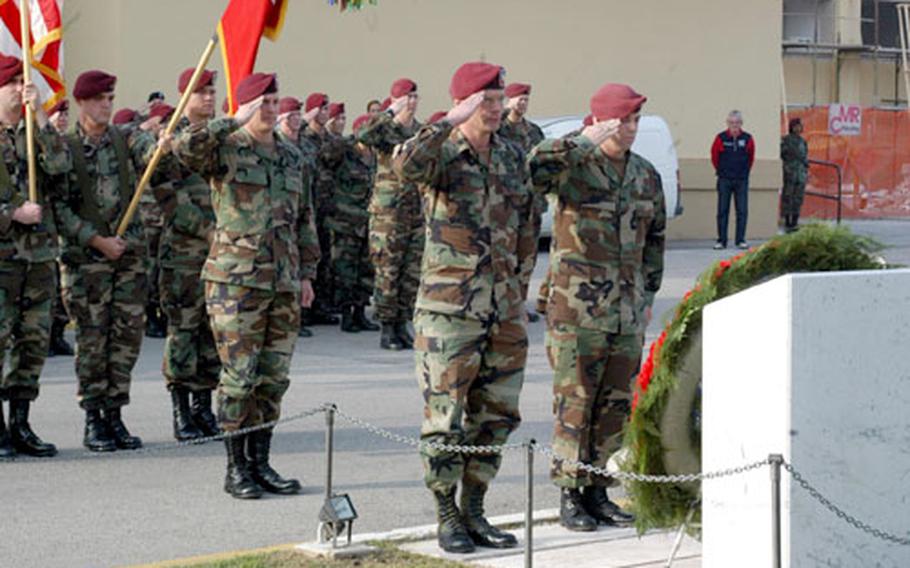 VICENZA, Italy &#8212; Maybe it takes a war for many Americans to see the meaning of Veterans Day.

Gravens was the keynote speaker for an early Veterans Day service Thursday at a base that certainly can relate. He spoke to fewer than 100 people in the base chapel at Caserma Ederle. More could have been expected if thousands of troops assigned to the base weren&#8217;t serving a yearlong stint in Afghanistan.

Among those attending the ceremony were members of the local Veterans of Foreign War Post 8862.

Tougaw said one could say that recent conflicts in Afghanistan and Iraq have energized the organization. About 70 percent of the post&#8217;s 1,100 members are members of the 173rd Airborne Brigade serving in Afghanistan.

Those relatively new members and others like them from units around the States serve to offset the loss of those from World Wars I and II who die daily across the country.

Gravens said after the ceremony he believes that Americans these days are thinking about veterans more and and thinking better of them, &#8220;probably better than any time since World War II.&#8221;

But as new generations join the military, they need to be told of the sacrifices of those who have gone before them. &#8220;And I, as a leader, need to help them understand that sooner rather than later,&#8221; he said.

Gravens has only a few months left on active-duty status to do that. He plans to end a 33-year career in March, retiring to Texas. His successor will be named by the successor to USAREUR commander Gen. B.B. Bell, who is headed to command U.S. Forces Korea.

A few hours after Gravens&#8217; address, a group of soldiers in a separate ceremony paid tribute to nine Sky Soldiers who died in Iraq.

Lt. Col. Michael Shinners, the brigade&#8217;s rear detachment commander, gave a brief history of Veterans Day to those gathered, tracing its history to the armistice signed following World War I.

He then read the names of nine soldiers from the brigade who died in Iraq and helped lay a wreath on a memorial in front of the brigade&#8217;s headquarters dedicated to them.