A colorful approach to deployment 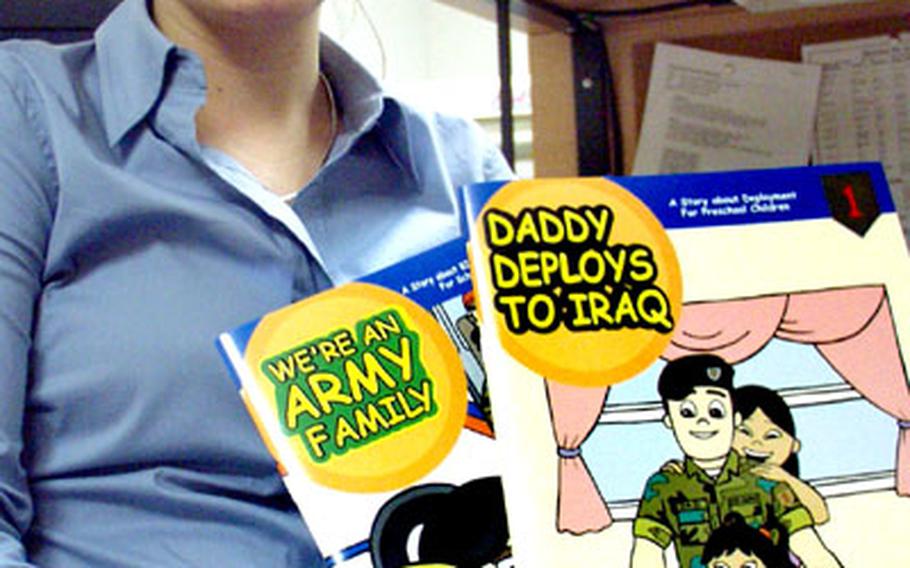 Carrie Pipkin, a computer specialist with the Army Community Services office in Würzburg, Germany, edited a series of coloring books for children of 1st Infantry Division servicemembers. The books help the children cope with the unit’s upcoming deployment to Iraq. (Steve Liewer / s&s)

W&#252;RZBURG, Germany &#8212; In the jumble of confusion before 12,000 1st Infantry Division soldiers head to Iraq, their children have two friends to help sort things out.

Karen Varcoe, co-author of the books, said they were created in the early 1990s and updated following the Sept. 11, 2001, terrorist attacks, which ramped up the number of military deployments worldwide.

The books are designed for different age groups, but the storyline is similar: Dad&#8217;s 1st ID unit is deploying for Iraq; the child and his friends must cope with mixed feelings of sadness, fear, pride and anger; with the help of mother and teachers, they work hard and keep in touch; and everyone is happy when Dad comes home safely.

Matt and Anna describe their experiences and the things they do while their fathers are away, such as drawing pictures for him, watching tapes and stories he makes for them, sending e-mail, and using M&M&#8217;s candy to count the days until he comes back.

To make it more real for youngsters from the W&#252;rzburg-based 1st ID, Pipkin and an ACS team rewrote the text to add references to the division and Iraq. She spent two weeks using a computer photo-editing program to drop in Big Red One patches and posters into the pictures.

ACS distributed the coloring books in December with a letter from the division commander, Maj. Gen. John Batiste, urging parents to &#8220;use the children&#8217;s books as a means to interact and prepare your children.&#8221; Hundreds were given to school counselors, and dozens more handed out at the opening of &#8220;yellow ribbon rooms&#8221; for families at 1st ID bases.

Dan Riley, a counselor at W&#252;rzburg American Elementary School, said teachers sent the books home with children just before the winter break. He said an informal survey after the holiday indicated 60 percent to 70 percent of the youngsters used them with their parents.

ACS is planning a companion book called &#8220;Mommy Deploys to Iraq.&#8221; That will take a little extra work with Pipkin&#8217;s photo-editing program.