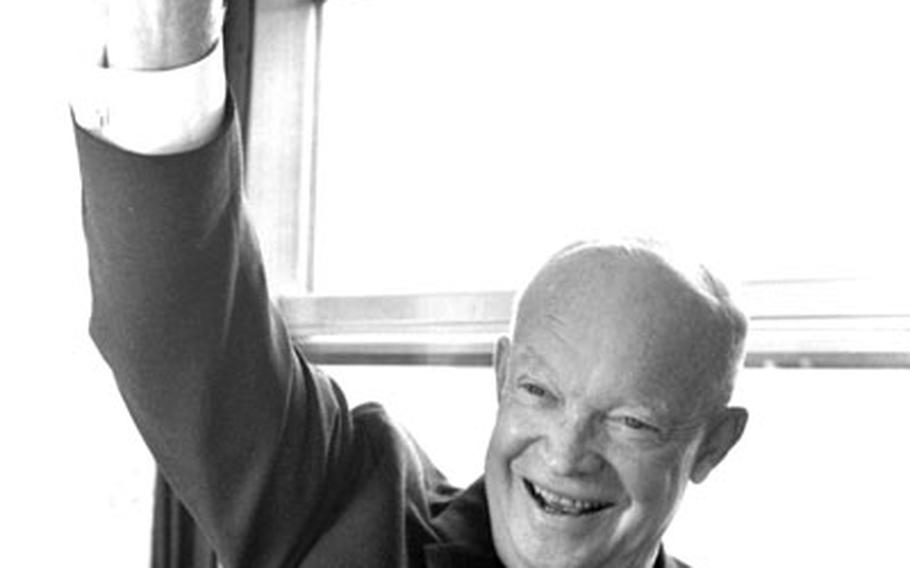 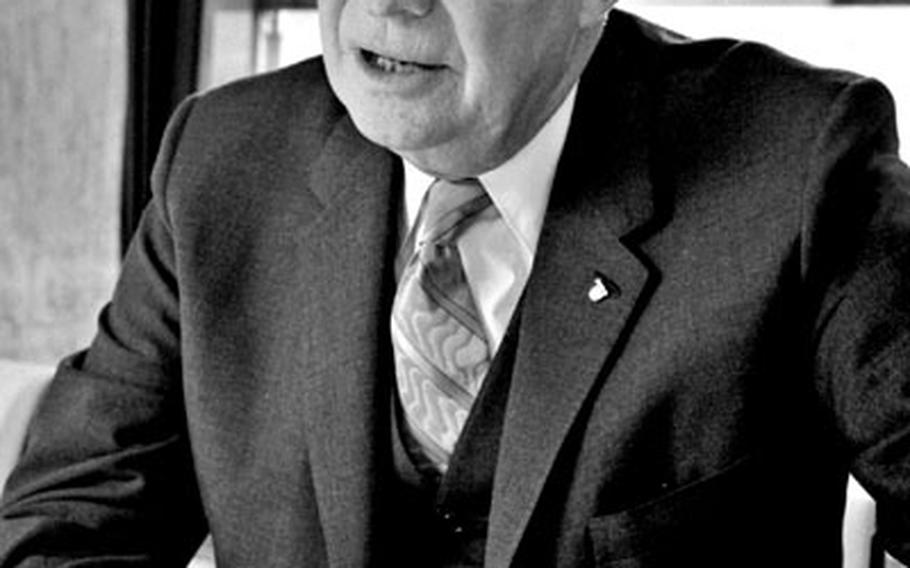 Former President Eisenhower makes a point during an interview with Stars and Stripes. (Red Grandy / ©S&S) 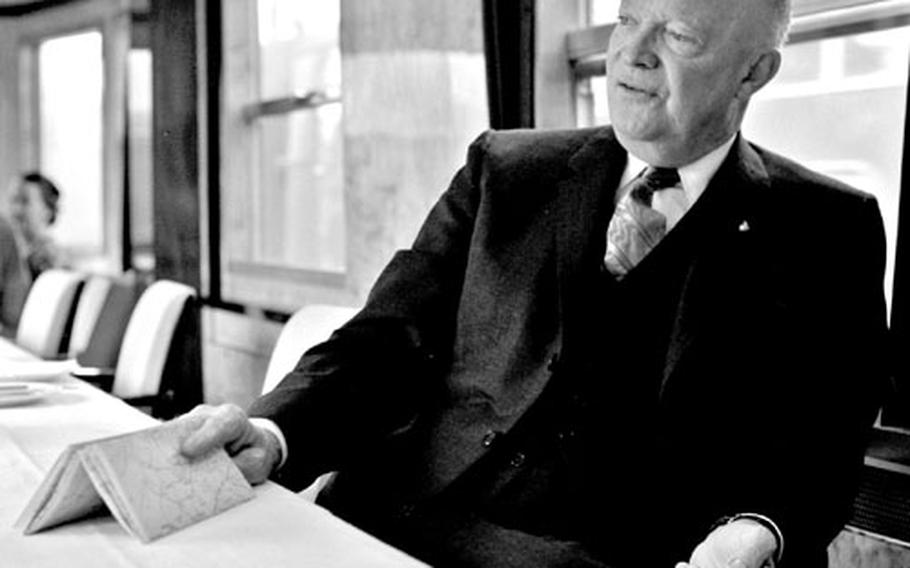 With a tourist guidebook close at hand, former President Eisenhower relaxes on the train ride through Germany. (Red Grandy / ©S&S) 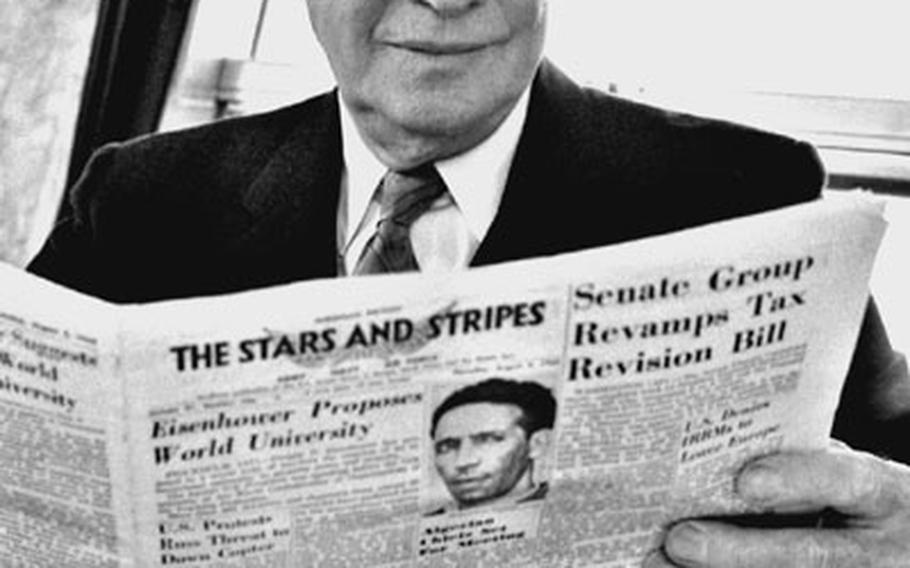 Former President Eisenhower reads a copy of Stars and Stripes. As the top U.S. military man in Europe during World War II, Eisenhower was extremely supportive of the paper's right to publish the news without command interference. His backing proved crucial in battles with those under him who begged to differ, notably Gen. George Patton. (Red Grandy / ©S&S) 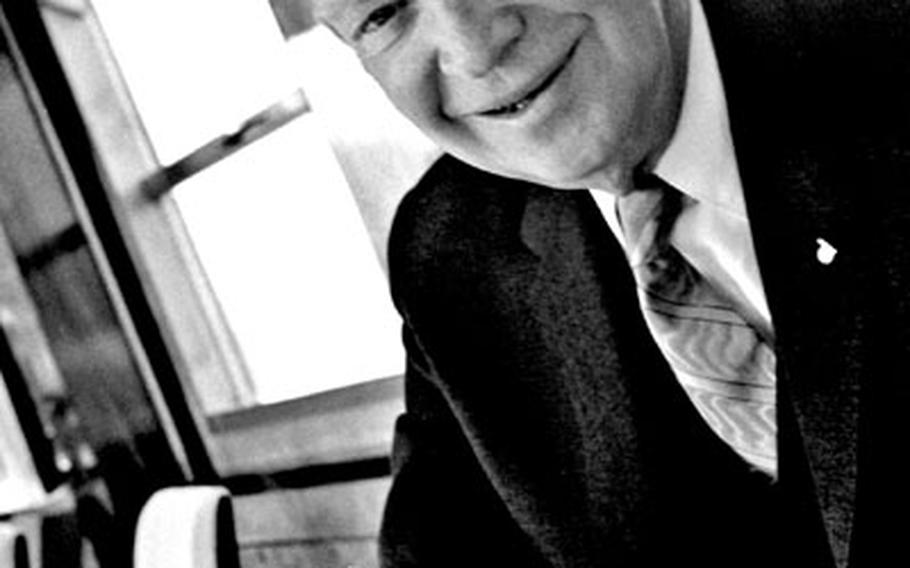 Former President Eisenhower poses with a copy of Red Grandy's famous Stars and Stripes photo of Ike getting the news of Gen. Douglas MacArthur's firing in 1951. (Red Grandy / ©S&S)

COLOGNE, Germany &mdash; "If there is anything that makes me angry, it's to hear someone make slighting remarks about the United States," former President Dwight D. Eisenhower, now visiting various areas of Europe as a private citizen, declared Thursday.

Interviewed across the breakfast table as the train carrying Mr. Eisenhower's party made its way through Germany's industrial Ruhr toward this Rhine metropolis, the former President continued:

"American prestige has been very high ever since the end of World War II. But the 1960 Presidential campaign didn't help matters any." (U.S. prestige was a campaign issue in 1960.)

Mr. Eisenhower expressed the opinion that the average American overseas creates a favorable impression for his home country. "You can be pretty sure that the occasional ones who misbehave over here misbehave at home too," he said.

Recalling the June 1960 mobbing of White House Press Secretary James Hagerty's car in Tokyo when Hagerty was in the Japanese capital to make arrangements for then-President Eisenhower's visit there, Mr. Eisenhower said the disorders were organized by a very small Red minority.

The riots, Mr. Eisenhower said, were an attempt to prevent ratification of the U.S.-Japan security treaty and should not be construed as evidence of anti-American feeling among the Japanese.

Mr. Eisenhower said he still wanted to go to Tokyo, even after the Hagerty incident, but was persuaded not to by the Japanese government.

The former President revealed he had been invited to come to Tokyo on many occasions since that time. "But I'm a private citizen now," he said, "and such a visit should be made by someone else."

The only formal appearance on the former President's private European tour itinerary was his address in Stockholm earlier this week at a conference of the World Confederation of Organizations of the Teaching Profession.

Asked if he had any thoughts about the Berlin wall, Mr. Eisenhower said some people suggested that, since the wall is a violation of the Berlin free-access agreements, it should have been pushed down with bulldozers when it was being erected.

"If I had still been President," he said, "we might have handled it a bit differently. But it's always easy to second guess."

It was Mr. Eisenhower, as President, who first placed a ban on the transporting of military dependents to overseas areas in the interest of improving the balance of payments deficit. Asked to comment on the gold outflow and dependent situation today, the former President said it presents a problem that still has to be solved.

In normal times, he said, he was all in favor of having dependents accompany military forces overseas, considering it both valuable from an educational and morale standpoint. He took the dependent move reluctantly, he said, because he considered the situation serious enough to warrant it.

He said he wished to point out that the move did not include only military dependents. His original order, he said, included the State Department and other government branches. Every person overseas who could be spared was to come home, he said.

He wasn't just trying to pick on the military, Mr. Eisenhower said. "After all," said the former President, who was given back his five-star rank after leaving the White House, "I have been a military man almost all my life."

Mr. Eisenhower expressed astonishment at the recovery of postwar Germany. Looking out of the train window at Essen, Duisburg and other Ruhr cities, he remarked it was hard to believe that the entire area had been reduced to rubble less than 20 years ago.

President or not, Mr. Eisenhower's personal popularity hasn't waned over the years. As the train stopped at Duisburg, railroad employees rapped on the windows and shouted their greetings to him. He responded with waves and wide grins.

More than 300 persons were jammed on the station platform at Cologne to greet the former Chief Executive, and they broke into loud cheer and applause as he stepped from his private car. About 1,000 persons were gathered at the bottom of the platform steps and police estimated another 5,000 lined the 500-yard-long route to his hotel, in the shadow of Cologne's 700-year-old cathedral.

Mr. Eisenhower disappeared into the hotel, but the growing crowd started rhythmic clapping until he appeared on the hotel balcony outside his suite. He stayed there for several minutes, waving while the crowd broke into wild applause.