A 'challenging and rewarding' deployment 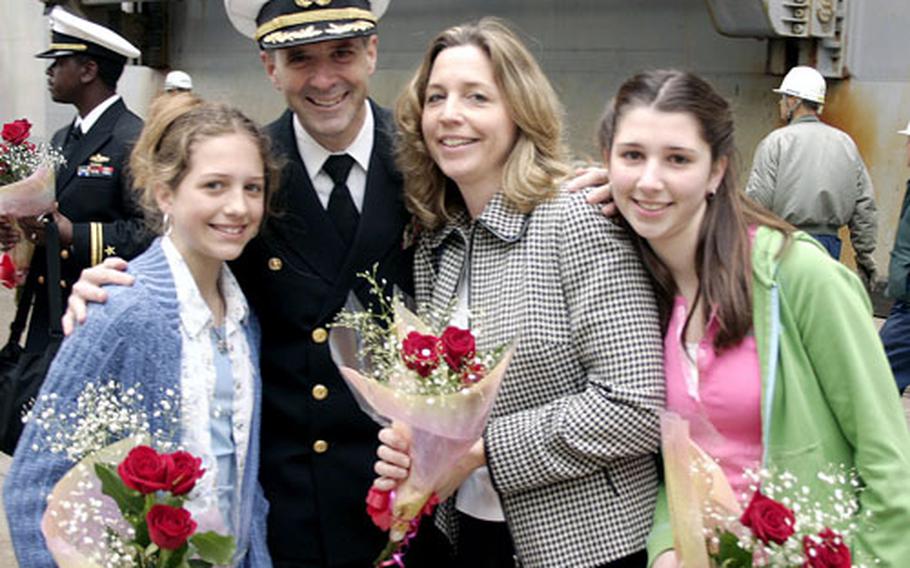 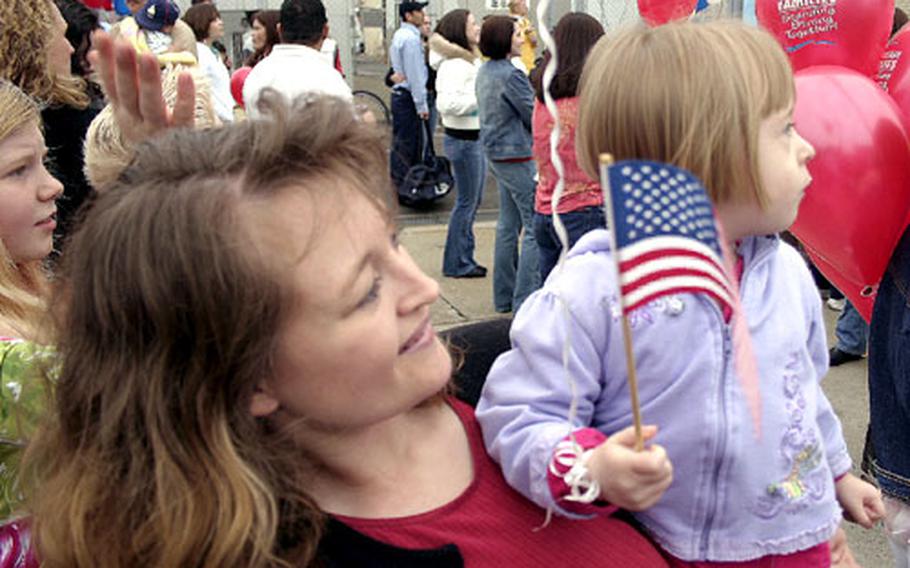 Becky Troyer and daughter Katelyn wait for Petty Officer 1st Class Darrin Troyer from the USS Essex to join them on the India Basin Pier at Sasebo Naval Base on Wednesday. (Greg Tyler / S&S) 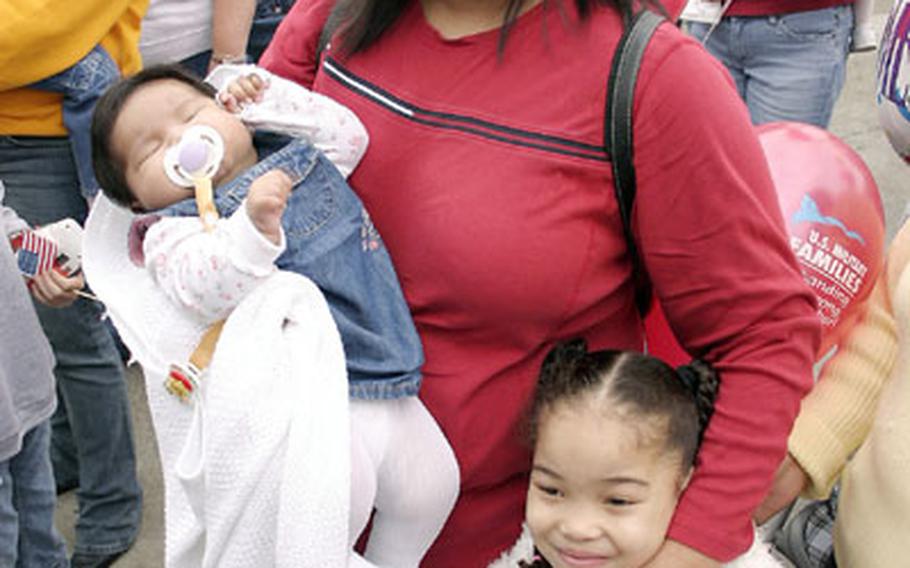 Evelyn Raymond waits on the India Basin pier with her daughters Alexis, right, and Ashley for her husband to disembark the USS Essex on Wednesday. Ashley was born during the deployment. (Greg Tyler / S&S) 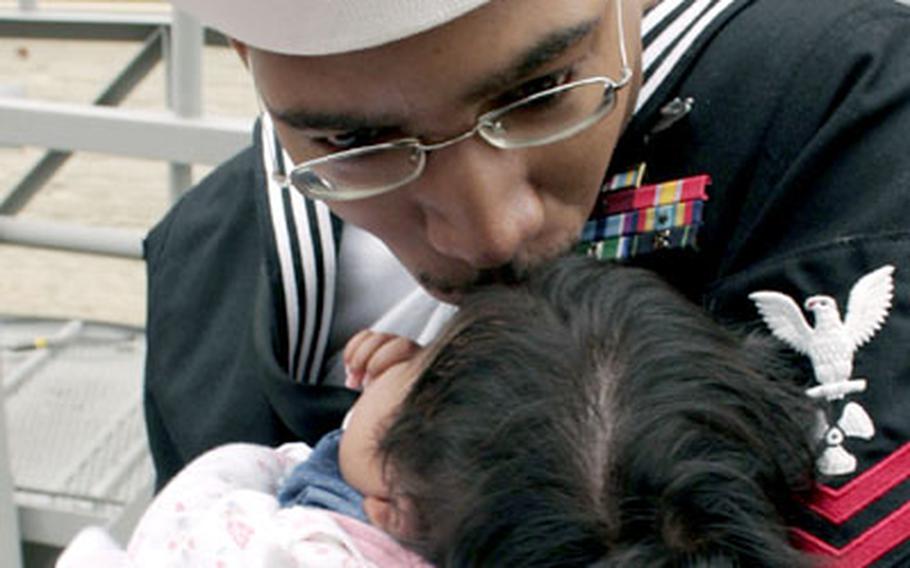 After the ARG returned to Sasebo on Wednesday, Donahue spoke about many of the specific tasks carried out during the deployment.

The USS Essex, USS Harpers Ferry and USS Juneau served eight months with other coalition forces as part of Task Force 50 to support ongoing operations in Iraq. About 2,000 Okinawa-based servicemembers of the 31st Marine Expeditionary Unit deployed with the ARG; they returned April 2 to White Beach Naval Facility, Okinawa.

&#8220;This deployment has been both challenging and rewarding, not only for the sailors and Marines who deployed, but also for our family and friends here in Sasebo,&#8221; Donahue said after the ships eased into Sasebo&#8217;s India Basin berths.

Donahue said the Essex ARG operated in the Central Command area of operations 188 days, longer than any other naval strike group except the 197 days of the USS Nassau deployment from August 2002 through May 2003.

&#8220;From maritime security operations &#8230; to combat operations in Fallujah to humanitarian relief operations off the coast of Sumatra, the sailors and Marines of the Essex ARG have succeeded at every mission and have great reason to be very proud of their accomplishments,&#8221; the commander said.

The 31st MEU offloaded at Kuwait Naval Base on Sept. 11, Donahue said, for acclimation training in preparation for operations.

&#8220;Their operations in Iraq included combat operations against the insurgency, security and stability operations, civil affairs missions, Iraqi border security, training of Iraqi security forces, security of Hadithah Dam and assistance and security for Iraqi&#8217;s first free elections,&#8221; he said. In addition, he added, the 31st MEU conducted operations in Western Al Anbar Province, one of the largest areas of operation in Iraq, and Fallujah.

&#8220;Our condolences go out to the family members and loved ones of the 48 Marines and two sailors who gave their lives during this deployment while conducting operations in Iraq,&#8221; Donahue said. The sailors killed were not attached to the Essex ARG, but to the 31st MEU as hospital corpsmen, an ARG spokesman said Thursday.

The ARG conducted North Persian Gulf security and interception operations with other multinational forces to provide security to the Al Basrah and the Khawr Al Amaya Oil Terminals. Multinational forces included ships from Australia, Singapore and the United Kingdom, he said.

The USS Juneau spent 107 days conducting surveillance and interception operations near the Horn of Africa, the commander said, and conducted 376 vessel queries. The USS Harpers Ferry conducted security operations in the North Persian Gulf serving as the afloat forward-staging base in the immediate vicinity of the Iraqi oil terminals for 116 days, the most of any coalition warship to date, Donahue said.

&#8220;While on station, Harpers Ferry conducted 33 visit, board, search and seizure missions and provided 38,000 meals to coalition forces protecting the oil platforms,&#8221; he added.

After the Dec. 26 tsunamis in South Asia, the USS Essex joined Operation Unified Assistance to provide humanitarian assistance in the region.

&#8220;In eight days, using helicopters and landing craft, air-cushion hovercrafts, we delivered over one million pounds of humanitarian aid to tsunami survivors in the northern areas of Sumatra, Indonesia. In total, from Jan. 18 to Feb. 8, USS Essex moved approximately six million pounds of relief supplies to devastated areas of Indonesia,&#8221; Donahue said.

The Essex then returned to the North Persian Gulf to rejoin the Juneau and Harpers Ferry to backload the 31st MEU and their equipment for the return transit.

&#8220;There are not enough words to express how much we sincerely appreciate the Sasebo community turning out to give their heroes the heartfelt welcome they so rightly deserve,&#8221; Donahue said.