A call for cooperation in Taji 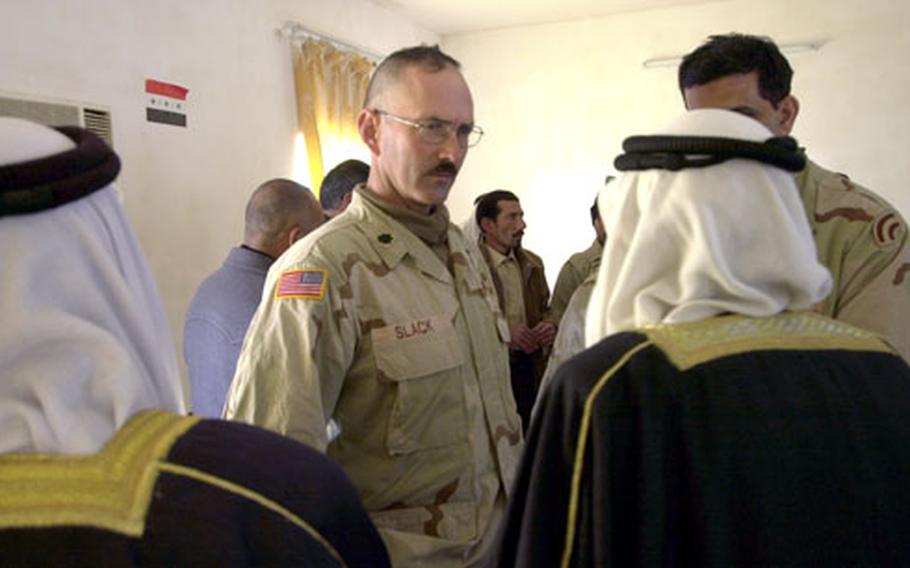 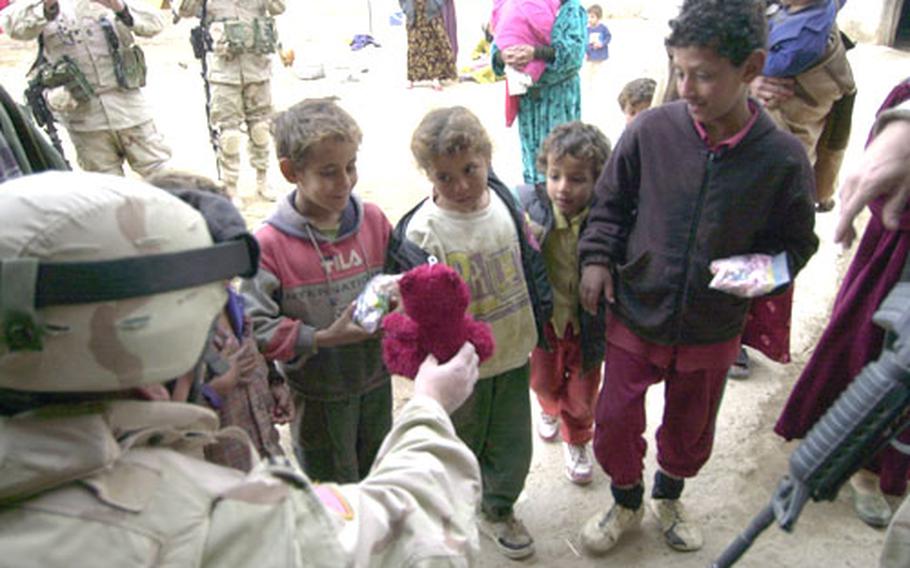 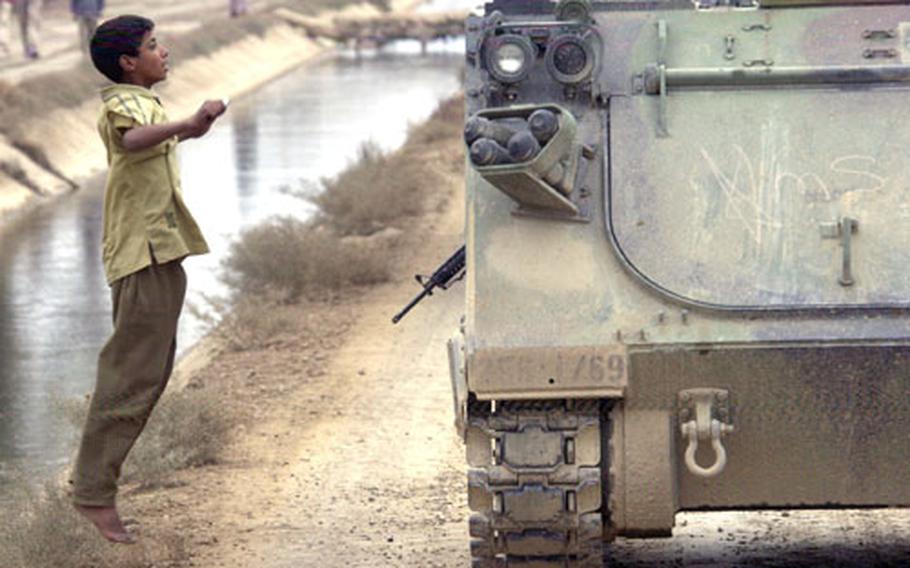 An Iraqi boy jumps up to get a look inside a parked U.S. armored vehicle in Taji, Iraq. (Joseph Giordono / S&S) 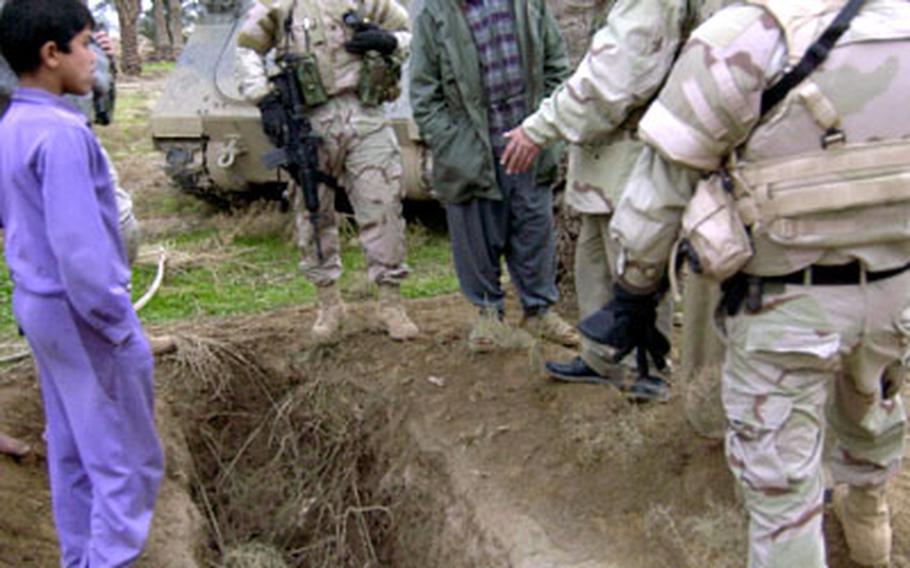 Soldiers from the 1st Battalion, 69th Infantry Regiment ask local residents about a trench found in a palm grove outside of Taji, Iraq. Soldiers say the trench could have been either a fighting position or a hiding place for a weapons cache. (Joseph Giordono / S&S) 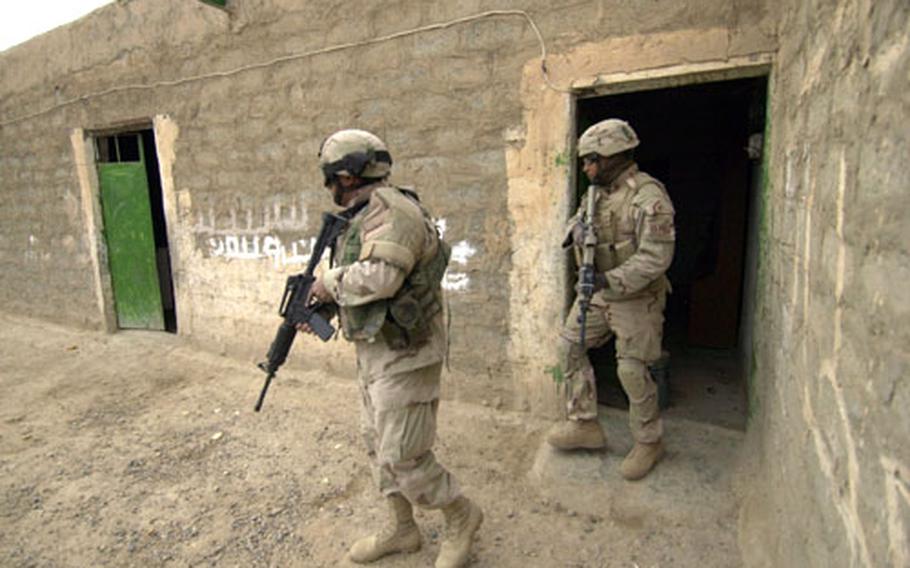 TAJI, Iraq &#8212; Local leaders in this mostly rural area on the outskirts of Baghdad are telling U.S. military commanders that security is still the most important issue to be resolved.

Military officials largely agree, and say the fastest fix is to get more cooperation from those same leaders and townspeople in ongoing efforts to root out insurgent fighters.

Last week, several battalion commanders and civil affairs personnel from the 256th Brigade Combat Team who patrol the Taji region sat down with local Iraqi officials at a khada, or regional council meeting. Working through the morning, the two groups exchanged thanks, sought information and worked to find common ground.

U.S. officials say the Taji area could be particularly important because it lies between Baghdad, Fallujah and Mosul, cities that have become centers of the months-long insurgency. Military leaders say insurgents pushed out in last month&#8217;s offensive in Fallujah could be training or seeking refuge in the area.

At the khada, local officials echoed those sentiments.

&#8220;If you secure this area, you can make Baghdad more and more safe,&#8221; one of the council members said through an interpreter. Insurgents have already threatened many on the council, he said.

One of the difficulties, the Iraqi leaders said, is that new U.S. units continually rotate through the local area, bringing different methods and troops than previous units. One council member said he has met with five different U.S. commanders since June 2003.

Some soldiers have the same complaint, saying they are sometimes only in one area long enough to get to know the local population, then are moved.

Insurgents have warned the local population against cooperating with the U.S. military and have attacked troops with roadside bombs on several routes throughout the area. In addition, Slack said, criminals have harassed truck drivers and other merchants.

Meeting with local political leaders and sheiks is one of the tactics to find the fighters, who council members claimed were largely foreigners. Another tactic is patrolling the countryside.

On Christmas Eve, a day after the council meeting, the unit sent out several patrols. One, a convoy of armored vehicles riding along one of the many irrigation canals around Taji, stopped in a palm grove near a farm complex.

The soldiers quickly searched the buildings. Then they asked the residents &#8212; nearly two dozen women and children and one teenage boy &#8212; about the situation. The people in the compound said they had enough gas to run their generator only 30 minutes a day.

Sgt. Javish Rosa, 25, of New York City, said the compound reminded him of Afghanistan, where he served an active-duty tour with the 10th Mountain Division. Rosa surveyed the scene, quietly slipping pieces of candy to the children.

The family offered the soldiers tea, and the troops returned with a box full of presents &#8212; stuffed animals, plastic flutes, crayons and other gifts. The encounter ended with smiles all around.

Out in the palm grove, soldiers discovered freshly dug trenches that could be either fighting positions or used to hide recently-unearthed weapons caches. Insurgents have been known to bury munitions in outlying areas before digging them up to use in later attacks on U.S. troops, military officials have said.

But Friday, as is often the case, all of the people living nearby said they didn&#8217;t know how the trenches were used or who dug them.