A boom of U.S. 'war babies' in Europe 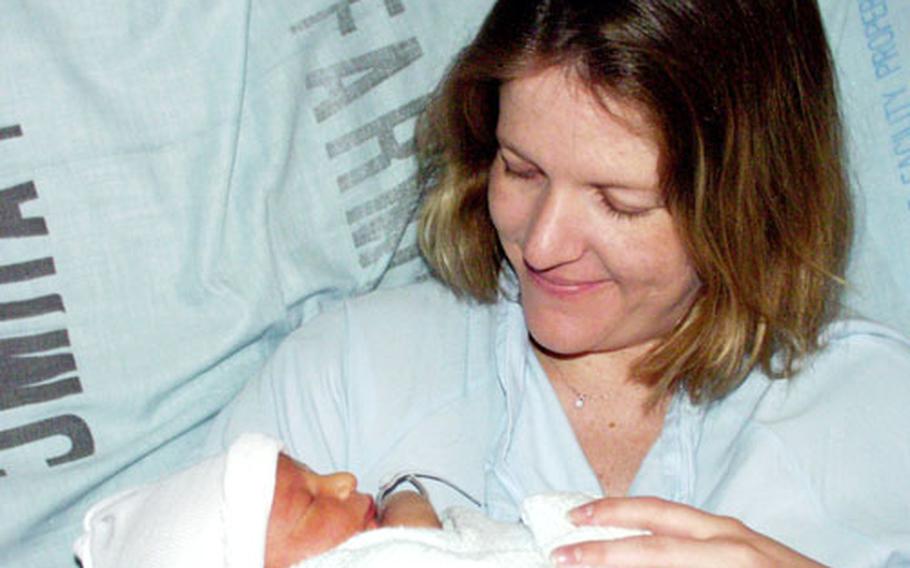 Air Force Staff Sgt. Sarah Lukens cuddles with her 2-day-old son, Braxton Hunter Lukens, on Monday at Landstuhl Regional Medical Center. While Lukens delivered at Landstuhl, some pregnant women are having to give birth in German hospitals because of a rise in military pregnancies. (Steve Mraz / S&S)

Air Force Staff Sgt. Sarah Lukens cuddles with her 2-day-old son, Braxton Hunter Lukens, on Monday at Landstuhl Regional Medical Center. While Lukens delivered at Landstuhl, some pregnant women are having to give birth in German hospitals because of a rise in military pregnancies. (Steve Mraz / S&S) 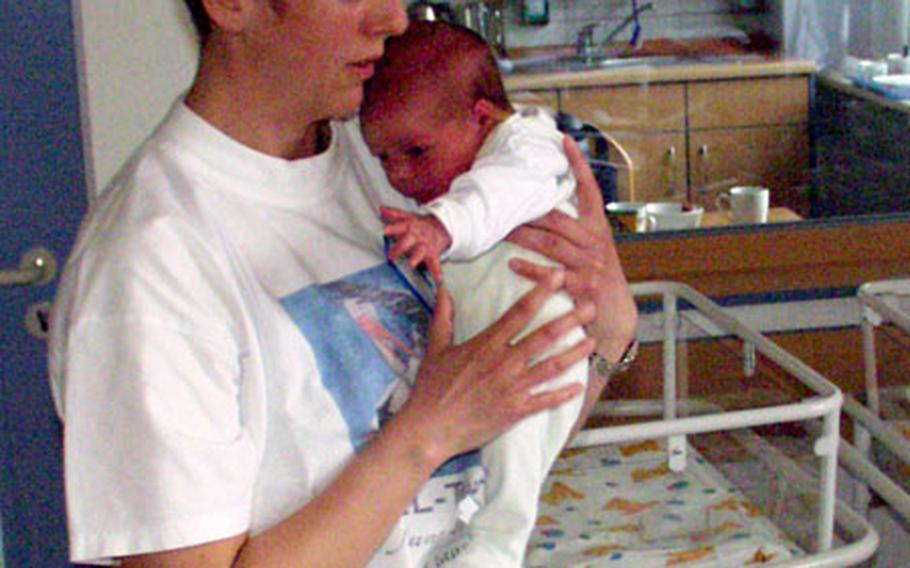 Operation Iron Stork may sound like the latest chapter in the global war on terrorism.

In actuality, the &#8220;operation&#8221; is the name for the nearly 310 pregnant women who are mainly Army 1st Armored Division spouses or active-duty soldiers in Baumholder, Germany.

The spike in pregnancies is a byproduct of the division&#8217;s recent return from Iraq and its upcoming deployment back to Iraq early next year, those dealing with the expecting mothers said.

The number of pregnancies is also high in the Kaiserslautern, Germany, military community, which is home to the largest concentration of Americans outside of the United States.

The increase in expected deliveries means that some soon-to-be moms in Europe will give birth in German hospitals. Only pregnant women who are active-duty military or deemed to have high-risk pregnancies are being told that they will deliver at Landstuhl Regional Medical Center.

&#8220;We&#8217;re having to defer quite a few nonactive-duty, nonhigh-risk pregnancies to the community because we don&#8217;t have the capacity,&#8221; said Air Force Maj. Sonia Kuch, nurse manager at Landstuhl Regional Medical Center&#8217;s obstetrics/gynecology clinic.

With seven labor and delivery beds, the American military hospital cannot handle the influx. The hospital typically handles about 70 deliveries a month, but that has jumped to as high as 118 expected deliveries in April and June.

Earlier this month, Tracy Gregory was told during her initial visit to Landstuhl Regional Medical Center that she would have to give birth at St. Johannis-Krankenhaus, the German hospital in Land- stuhl. Nurse Colette Breaux at LRMC reassured Gregory that staff members at the German hospital speak excellent English, and Tricare, the military&#8217;s health care coverage program, will cover the cost.

Gregory will be dealing with the situation on her own for the time being. Her husband, Army Sgt. Bernard Gregory with the 23rd Ordnance Company, will be in Afghanistan when the couple&#8217;s second child is due Nov. 19.

Needless to say, the young mother who gave birth to her first child in the United States is somewhat uneasy.

&#8220;I think they&#8217;re quite impressed by the time they leave,&#8221; said Mader, speaking English with a British accent she acquired while working in United Kingdom hospitals for three years.

With the large amount of pregnancies in Baumholder, numbers dictate that more than a few women will give birth in German hospitals. Monthly tours of the three German hospitals in the Baumholder area are being offered.

Jean-Marie Williams, a contractor with the New Parent Education and Support Program at the 222nd Base Support Battalion in Baumholder, strongly encourages the pregnant women there to take a tour in case they have to deliver at a German hospital.

And having to deliver a child in a German hospital is not the end of the world.

&#8220;Actually, the patients like it downtown,&#8221; said Air Force Maj. Kimberly Bridge, head nurse of labor and delivery at Landstuhl.

As to why so many women are pregnant now, Kuch, the obstetrics and gynecology nurse manager at Landstuhl, gathers the increase could be linked to the nature of war.

Dealing with the latest baby boom

A deployment-related baby boom in the Kaiserslautern and Baumholder, Germany, military communities means many women must deliver their children in German hospitals because the American military hospital can&#8217;t handle the influx. Here are some numbers illustrating the trend.