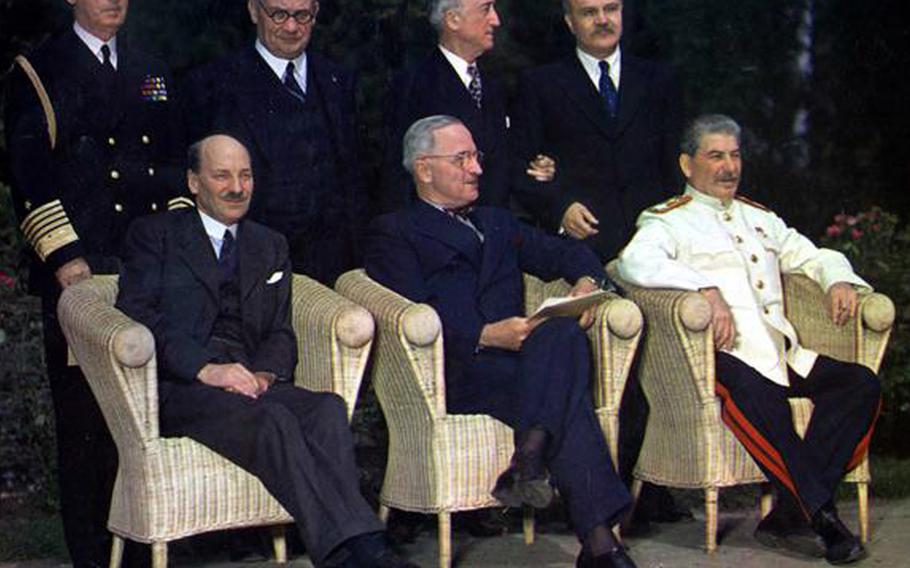 The release of two atomic bombs on Japan in August 1945 helped end World War II but ushered in the Cold War, a conflict between the United States and the Soviet Union that dragged on nearly half a century.

In the United States, the use of the bombs was widely praised by a public tired of war and high casualties. America heaved a huge sigh of relief that the blasts ended the need to shift hundreds of thousands of troops who had survived Europe to fight yet another bloody war on Japanese soil.

In the decades that followed, however, as the passions of that era have cooled, historians have taken another, dispassionate look at the events of 1945. A number have concluded that while the bomb may have helped end the war quickly, it fueled the U.S.-Soviet Cold War confrontation whose effects still bedevil us today.

After the surrender of Germany and Japan, the two world powers maneuvered for decades to increase their spheres of influence around the globe, spurred on by competing ambitions and ideologies of capitalism and communism. Cold War calculations led to a divided Germany and U.S. involvement in wars in Korea and Vietnam.

Some form of Cold War would have commenced whether or not the U.S. had dropped atomic bombs on Japan, said Arnold A. Offner, Cornelia F. Hugel professor of history emeritus at Lafayette College in Easton, Pa., and author of several books on the Cold War. “It might not have been as intense, but you would have had a kind of political-economic Cold War standoff regardless of the bomb,” he said. “It would be a long way to détente.”

But some historians cite the explosions over Hiroshima and Nagasaki 70 years ago as among the key events that metastasized the ideological rift between the two powers into a full-blown Cold War dominated by nuclear brinkmanship.

“Hiroshima changed international relations, probably permanently,” said Martin J. Sherwin, author of “A World Destroyed: Hiroshima and Its Legacies” and history professor at George Mason University near Washington. “It sent a message to the world that the most admired and most powerful nation, the USA, believed that nuclear weapons were legitimate instruments of war and could be used again.”

Although the Cold War ended in 1991 with the disintegration of the Soviet Union, its legacy lives on — from the rocky relationship between Russia and the West to America’s thorny dealings over nuclear weapons programs in countries such as North Korea and Iran.

Things weren’t always so contentious between the U.S. and the Soviets.

During World War II, they never completely trusted each other even though they were fighting a common enemy. But even into the last year of the war, the nations were in general agreement about postwar power sharing. President Franklin D. Roosevelt, Soviet Premier Joseph Stalin and British Prime Minister Winston Churchill met to discuss Europe’s postwar reorganization during the Yalta Conference in February 1945.

Until America’s first successful atomic bomb test in July 1945, its entire planned postwar policy toward Germany was geared to controlling and weakening its economy so that it could never again build militarily, said historian Gar Alperovitz, author of “The Decision to Use the Atomic Bomb and the Architecture of an American Myth.”

That plan required the assistance of France, Great Britain and the Soviet Union, which was expected to occupy much of Eastern Europe by war’s end.

Germany’s “industrial disarmament” was a postwar policy Roosevelt maintained up to his death in April 1945, an understanding between the two powers that “had nothing to do with liking each other,” he said.

“The bomb changed all that,” Alperovitz said. “The bomb made it possible for the United States to do whatever it wanted in Europe because we alone could control Germany. The Russians didn’t have that.”

The new president, Harry S. Truman, and other U.S. negotiators arrived at the Potsdam Conference in Germany in late July, meeting again with Churchill and Stalin on the heels of the first successful atomic bomb test. The tenor of America’s negotiations with the Soviet Union changed with the atomic breakthrough, which hard-liner Secretary of State James Byrnes described as “a gun behind the door” in the dealings.

In Potsdam, the U.S. began to emphasize rebuilding a self-sustaining Germany that would pay far less in reparations to the Soviets than had been previously agreed.

“There’s no question that ownership of the bomb — and being the only power with the bomb — definitely put a chip on the American shoulder during their negotiations,” Offner said.

Truman, unsophisticated in foreign affairs and greatly influenced by Byrnes, believed using the bombs on Japan would shock Stalin and contain his ambitions, Sherwin said. “He was right about the former and wrong about the latter.”

Byrnes soon found that the Russians were not cowed by the gun behind the door, said Gregg Herken, professor emeritus of history at the University of California-Merced and author of “The Winning Weapon: The Atomic Bomb in the Cold War.”

“What actually happened was sort of the reverse of what Byrnes expected,” Herken said. Byrnes found that his Russian counterpart, Vyacheslav Molotov, aggressively pushed Soviet demands in Eastern Europe.

“The bomb was not very useful — and not useful at all in diplomacy in the early Cold War with the Russians,” he said.

Alperovitz argues that Truman’s use of the bomb was the first of several events over the next two years that would fully spark the Cold War.

“In the spring of 1946, we started rebuilding Germany, and you could almost see the Russians clamping down more and more in Europe,” Alperovitz said. And while the U.S. felt assured it could control a stronger Germany in the future with the threat of atomic weapons, the Russians didn’t share that assurance and began bringing down the Iron Curtain as a buffer between it and Germany, he said.

Devastated by Germany in two world wars — with at least 20 million Russians dead defending against the Nazis — the Soviets took drastic actions to prevent a rising Germany from ever threatening their homeland again. The decision by the Western Allies in 1949 to merge their three occupation zones into a single entity — West Germany — was followed months later by the establishment of the German Democratic Republic, or East Germany, dividing the country for nearly a half-century.

“That, I think, is the most important way to understand the early Cold War getting started,” Alperovitz said.

Dropping the atomic bombs “reassured Stalin that we were as bad as he thought we were,” Offner said. “All the bomb did was reinforce their view that we had it and would try to leverage them.”

Although the Soviet Union was just beginning to rebuild from the war’s devastation, Stalin made it a priority to possess a store of atomic weapons — an endeavor aided greatly by Soviet spies planted in the U.S. program.

Four years after Hiroshima, the Soviets successfully tested their first atomic bomb, and by then they had come to view America as a greater threat than a divided Germany. The nuclear arms race that came to define the Cold War was on in earnest.

Sherwin ponders the possibility that today’s world would be much different had Truman made a different choice 70 years ago. He describes the Hiroshima and Nagasaki bombs as the “Adam and Eve” of our modern-day nuclear-armed world, where much of the Pacific remains on edge as North Korea develops a missile for delivering an atomic weapon anywhere in the world, and where Iran’s possession of the bomb would dramatically alter the Middle East.

Consider what the world would be like today had the U.S. not used the atomic bombs, declaring instead after the war that it had created the weapon only because it feared Germany was doing the same, Sherwin said.

“Then, what if we had announced that we did not use them because they are illegitimate, that their use in any way, under any circumstances, would be a crime against humanity?” he said.

“Can you imagine that the history since 1945 would not be different?”