A bit of luxury for troops at Camp North Victory 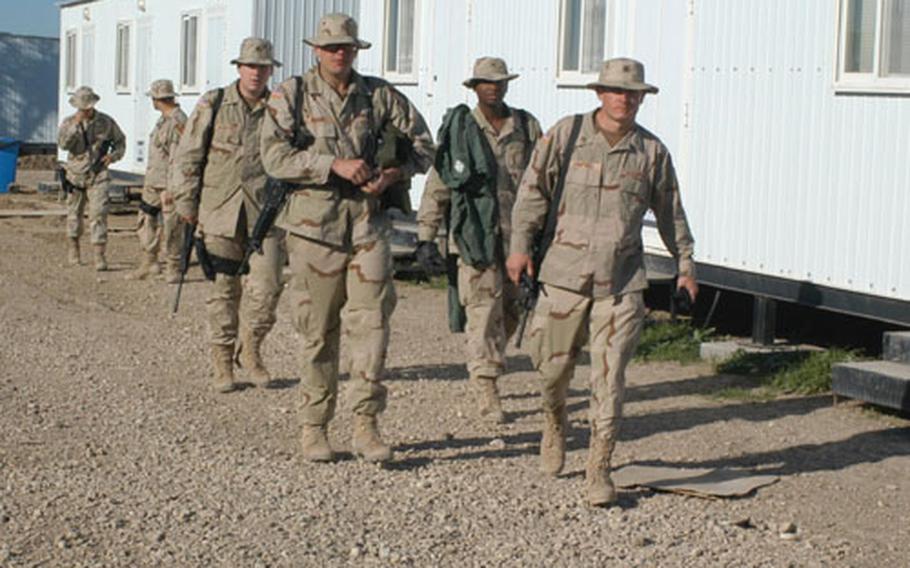 1st Cavalry Division soldiers stroll between the rows of living trailers at Camp Victory North. The 1st Cav soldiers are the first to live at the Army&#39;s newest base camp in Baghdad. (Marni McEntee / S&S)

BAGHDAD &#8212; Rows of white trailers stand side-by-side on their gravel-lined pads, each equipped with a shower, toilet and sink.

Call it prefab heaven or trailer park hell &#8212; either way, the first soldiers to move into Camp North Victory say Baghdad&#8217;s newest base camp is better than they hoped.

The first lodgers at the new camp are 3,000 soldiers from the Fort Hood, Texas-based 1st Cavalry Division&#8217;s 2nd Brigade Combat Team, who moved into the base in early February.

Robles, 25, of De Forest, Wis., shares his trailer with one other soldier: a rarity for enlisted men. Platoon sergeants and ranks above get their own rooms and share a bathroom.

While the trailers offer a level of privacy unheard for soldiers used to living 15 to a tent, they aren&#8217;t soundproof, said 1st Lt. Sidney Howard, 25, of Mobile, Ala.

Each room has a heater and an air conditioner, a closet and a table. The Army even issues the soldiers mattresses, comforters and pillows for the metal-framed beds.

Robles, a veteran of tours to Bosnia and Afghanistan, said he figures the Army knew its overstretched forces were due for a quality-of-life upgrade.

The Army has come up with a $800 million new base plan that will allow Iraqis to move back into the palaces, government buildings and other structures the Army took over when it occupied Baghdad last March. There are currently 24 U.S. Army bases surrounding Baghdad, but plans call for that number to be cut to eight.

Camp North Victory, which will eventually house as many as 10,000 soldiers, figures to be the largest of bases that remain.

Camp North Victory is still under construction. The Army and Air Force Exchange Service opened a temporary PX in a tent there last weekend until two enormous buildings are ready for use. Contractors are building a new dining facility. Other plans include a fitness center, Internet caf&#233;, morale center and chapel.

Last Sunday, Sgt. 1st Class Vi rgil Smith, 42, of Swainsboro, Ga., reflected on the good life while sitting on his trailer steps in the sun.

His son, Air Force Airman Virgil Smith, 18, got a chance to visit his dad on an off-day from his job at Baghdad International Airport. In a military where Air Force troops often get better digs than their Army brethren, the junior Smith admitted his dad had the good life.