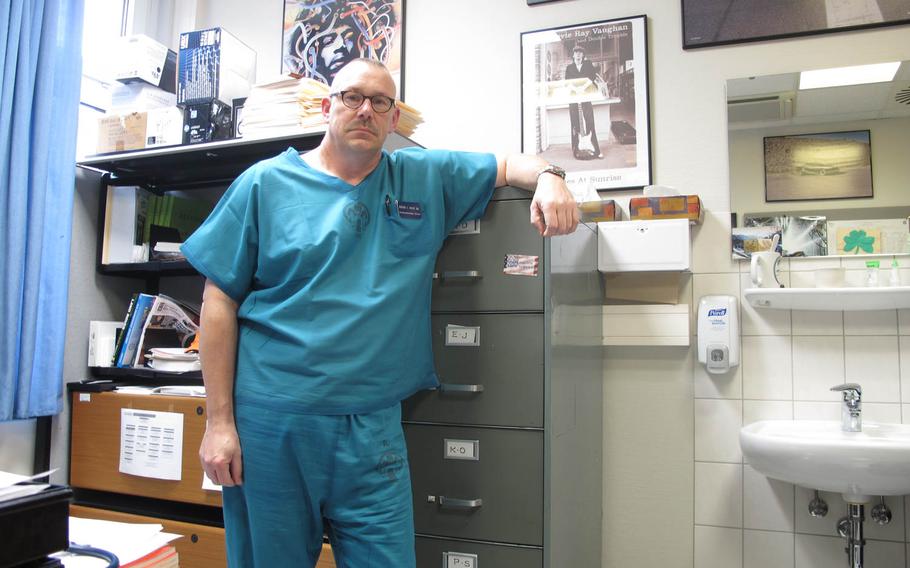 Dr. Jeff Wolff, a civilian physician at Landstuhl Regional Medical Center, is among the nearly 700 overseas civilians who the Defense Department says received a housing allowance in error. Without the benefit, Wolff says he is leaving DOD employment abroad and relocating to the U.S. (John Vandiver/Stars and Stripes)

STUTTGART, Germany — Dr. Jeff Wolff loves working with the patients at Landstuhl Regional Medical Center. So why leave suddenly after more than a decade?

Wolff is among the almost 700 civilian Defense Department employees who next month will have housing allowance benefits cut from their paychecks. Wolf will be leaving Germany on Monday — just days before the cuts take effect — for a job with the Department of Veterans Affairs in Texas.

At issue are conflicting opinions over whether an obscure set of State Department regulations allow certain locally hired workers to receive housing allowance benefits. Affected employees contend that DOD is retroactively applying a new interpretation to a decades-old regulation governing who is eligible for Living Quarters Allowance. DOD counters that it is obliged to enforce regulations.

When the DOD determined last year that 659 overseas civilian employees, mainly in Europe and the Pacific, were receiving housing allowances in error — a contention refuted by the workers themselves — a one year LQA extension was provided to help employees plan for a future without the subsidy. That extension expires in early May — the dates differ for individuals affected.

“I’ve been here 11 years and these are the greatest patients in the world,” Wolff said of the troops wounded in war and aging veterans he has cared for and treated. Wolff said he leaves with a great deal of anger directed at the DOD.

“This last year has been a total fiasco,” Wolff said. “Why would anyone want to work for an employer that has become as toxic as DOD. It’s been nothing but a big slap in the face.”

During the past year, DOD has urged workers to file special requests to be relieved of debts associated with past LQA payments. Workers who have not made such a request by the time LQA expires, will have their wages garnished in addition to having to cover their housing expenses out of pocket.

At least 556 of the 659 affected employees have requested waivers and 483 have been approved. Others continue to be processed. To date no one has been denied a request for debt relief, according to the Defense Finance and Accounting Services website

However, the challenge of making ends meet in costly overseas locales without an allowance still remains, employees said.

Some, such as Wolff, have managed to find work stateside, but others say they are looking for ways to economize or planning to dip into savings to help cover the costs of rent and utilities.

The workers’ dispute with DOD stems from a 2011 ruling by the Office of Personnel Management, which determined that locally hired employees are eligible for LQA only if they worked for no more than one non-government employer overseas before joining government service. For years, many personnel offices had interpreted the rule differently.

“I’m still trying to figure out how someone today can reinterpret what someone else wrote 30 years ago and absolutely no one of authority questions it,” said Michael Taylor, an Air Force civilian at Ramstein Air Base. “It became the new law unchallenged and was retroactively applied.”

DOD officials, however, say they are obligated to enforce regulations and point to the measures taken to ease the financial pain of employees, such as the debt waivers and one-year extension of housing benefits.

Taylor, who lives in a small village near Kaiserslautern, said he won’t walk away from a job he loves with the Air Force, where he works as a foreign treaty analyst, but is holding out hope DOD will eventually restore the benefits he was promised when he was hired.

“We will probably make ends meet, but it certainly is a hardship,” Taylor said.

Joni Thomas, another Air Force civilian at Ramstein whose debt was waived, said DOD should honor the original terms of her employment, which guaranteed a housing allowance.

“It feels like a betrayal,” she said. “Most of us are veterans who have sacrificed a lot and elected to continue to serve as civilians. I think it is a tragedy the way they are treating people who have given so much. This could have been handled with a swipe of a pen.”

Many of the affected civilians have banded together over the past year, trying to galvanize support for their argument and have garnered several high-level supporters, including European Command’s Gen. Philip Breedlove and Africa Command’s Gen. David Rodriguez, who have both issued letters urging DOD to restore the benefits.

In addition, several lawmakers have voiced concern, even calling on the Government Accountability Office to investigate DOD’s management of housing allowances.

Karen Diks, an Air Force civilian at Aviano Air Base, Italy, said she and her family have been saving money all year to prepare for the loss of LQA. For now, Diks said, she needs to stay in Italy to be close to her terminally ill father-in-law in Europe. Even after housing benefits go away, the push to get a better resolution will press on, she said.

“I think what they (DOD) are doing is wrong and immoral,” Diks said. “It’s been a long year, but we are not giving up. It shouldn’t have to be this way.”