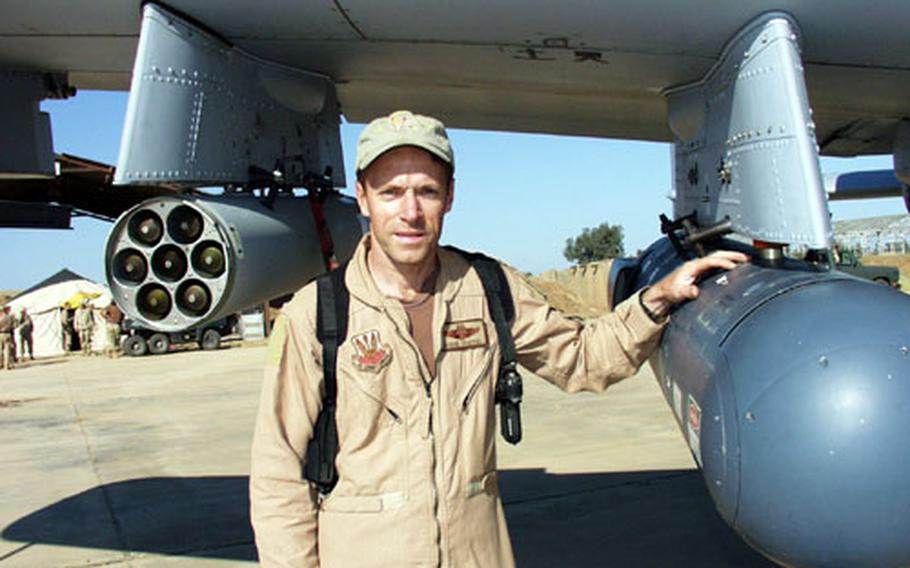 Lt. Col. Steve Chappel, commander of the 303rd Fighter Squadron, points out the targeting pod on an A-10 aircraft Wednesday. It allows pilots to monitor and record movement on the ground from as high as four miles, while relaying the information about enemies to U.S. ground troops. (Marni McEntee / S&S)

Lt. Col. Steve Chappel, commander of the 303rd Fighter Squadron, points out the targeting pod on an A-10 aircraft Wednesday. It allows pilots to monitor and record movement on the ground from as high as four miles, while relaying the information about enemies to U.S. ground troops. (Marni McEntee / S&S) An A-10 Warthog taxis off the runway after landing at Kirkuk, Iraq, Wednesday. The 303rd Fighter Squadron jets will provide air support to U.S. troops north of Baghdad. (Marni McEntee / S&S)

KIRKUK, Iraq &#8212; Ground troops in northern Iraq can rely on air support from a cadre of A-10 Thunderbolts that began flying missions Thursday from a recently secured air base here.

Six A-10s &#8212; based at Tallil, south of Baghdad, during the final days of the war &#8212; moved Wednesday to Kirkuk to patrol and support Army and Marine units in the country&#8217;s northern sector, 303rd Fighter Squadron commander Lt. Col. Steve Chappel said. Another half-dozen A-10s, also known as Warthogs, will remain at Tallil to support troops in the south.

&#8220;As the Army tries to clear up pockets of resistance, we&#8217;re here to support them from the air,&#8221; said Chappel, whose Reserve squadron calls Whiteman Air Force Base, Mo., home.

A-10s will be based at Kirkuk at least through August, when the next three-month Aerospace Expeditionary Force rotation ends, he said. The airfield, quickly abandoned by remnant local forces when U.S. Army troops arrived in mid-April, is littered with rusting hulks of Iraqi armored personnel carriers left behind from the first Gulf War.

The arrival early Wednesday of the first two A-10s caused something of a stir at the former Iraqi fighter base, now home to roughly 2,500 U.S. troops, the bulk of whom are Army soldiers.

Air Force members rushed to take photos of the jets taxiing south of the runway to their new compound. Members of the 303rd were still organizing tents and placing concertina wire around their section of the base Wednesday. A bulldozer was brought in to build a dirt berm to help secure the area.

Troops used a high-pressure fire hose in a last-minute effort to clear rocks and debris from the taxiways before the planes arrived.

In addition to its arsenal of a 30 mm anti-tank gun, 500-pound bombs, rockets and illumination flares, the Whiteman jets carry the Litening II Targeting Pod, a new infrared imaging system that allows pilots to spot enemy troops from as high as 20,000 feet and relay that information to ground troops, Chappel said.

Although many active-duty A-10 squadrons are modifying their aircraft for the new targeting pods, reserve units are the only ones to have fully installed the system, Chappel said. Operation Iraqi Freedom was its first test in combat, Chappel said.

Chappel, a veteran of the 1991 Persian Gulf War and 1999 Kosovo air campaign, said the introduction of the Litening Pod technology has given the tank-killer new prowess and may stamp out rumors that they will be phased out of the Air Force inventory.

Its infrared technology allows the pilot to perform night-support missions and put a laser spot on the ground to guide in bombs with greater precision.

&#8220;It allows us to look at a target much more closely, saving ammunition and letting us get our eyes on [friendly forces] easier,&#8221; he said.