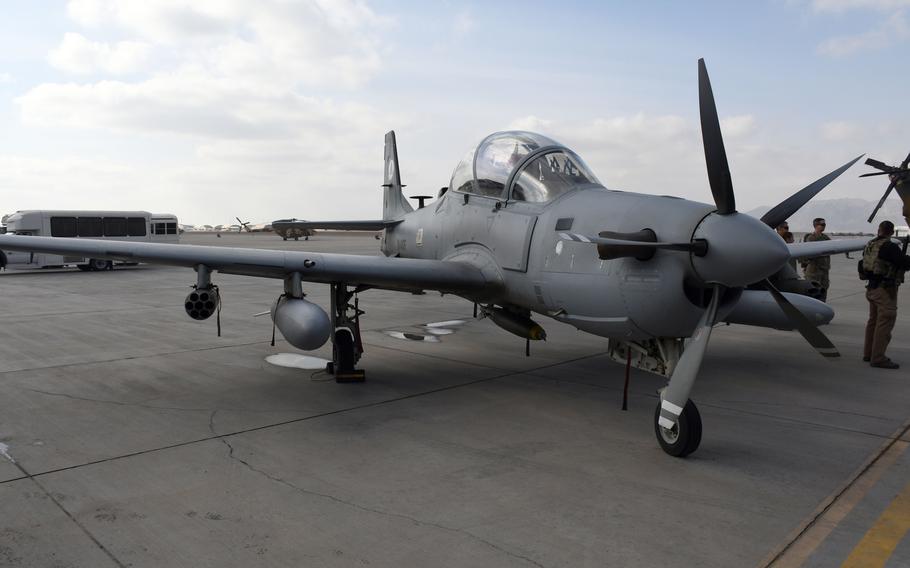 Buy Photo
An A-29 Super Tucano of the Afghan air force on the tarmac at Kandahar Air Field, Afghanistan, Tuesday, Jan. 23, 2018. The planes can be armed with conventional or smart bombs, machine guns and rockets. (Chad Garland/Stars and Stripes)

Buy Photo
An A-29 Super Tucano of the Afghan air force on the tarmac at Kandahar Air Field, Afghanistan, Tuesday, Jan. 23, 2018. The planes can be armed with conventional or smart bombs, machine guns and rockets. (Chad Garland/Stars and Stripes) 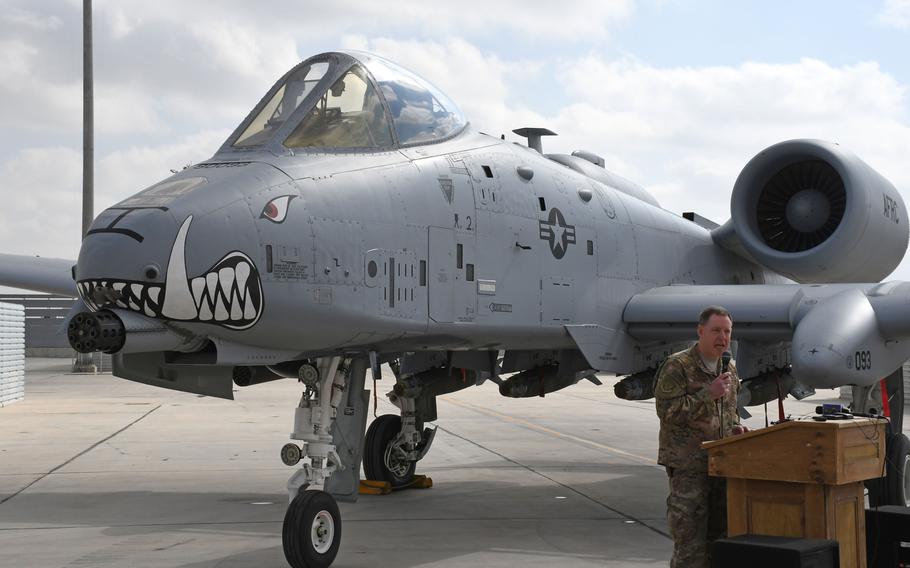 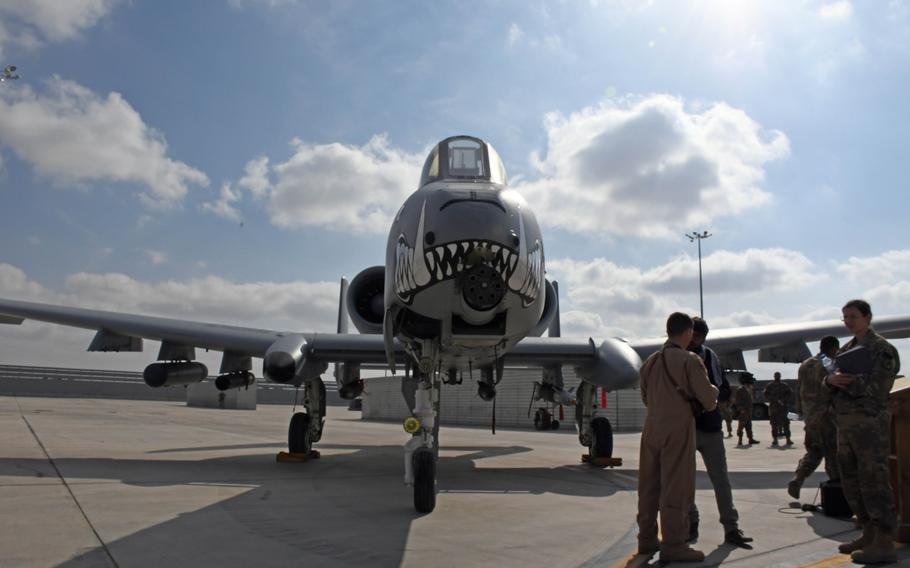 Buy Photo
An A-10 Thunderbolt II of the 303rd Fighter Squadron sits on the tarmac at Kandahar Air Field, Afghanistan, Tuesday, Jan. 23, 2018. (Chad Garland/Stars and Stripes) 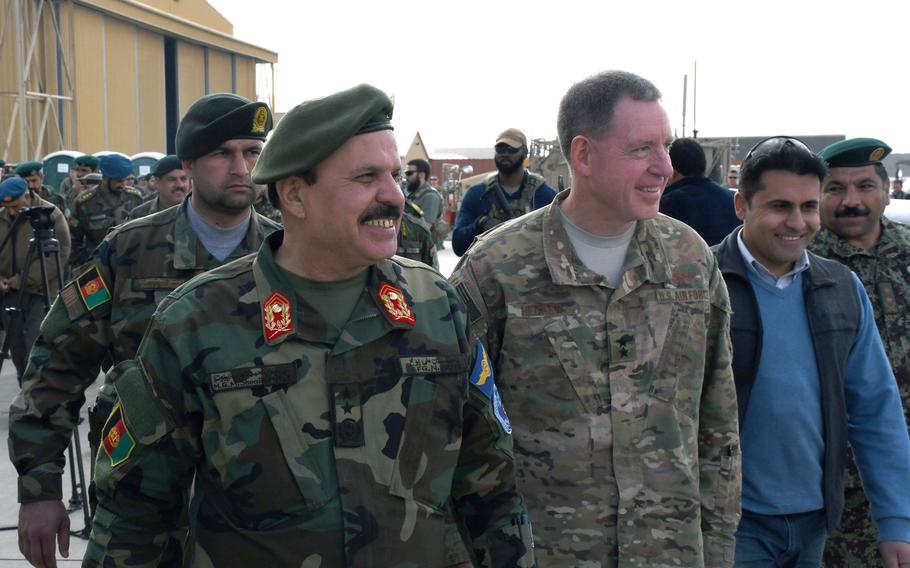 The $19 million aircraft, beloved by ground troops and so far spared from Air Force efforts to ground them for budgetary reasons, will also support counterterrorism efforts.

The deployment comes as U.S. Central Command realigns its aircraft, crews and other assets in the region, as the anti-ISIS campaign in Iraq and Syria winds down and as demand for precision strikes and close air support ramps up in Afghanistan under President Donald Trump’s South Asia strategy.

In addition to the A-10s, the U.S. has deployed MQ-9 Reaper drones to provide armed overwatch and surveillance, as well as HH-60G Pave Hawk helicopters for personnel recovery and combat search and rescue.

The A-10s are from the 303rd Expeditionary Fighter Squadron, based out of Whiteman Air Force Base, Mo. They had been slated to replace a squadron flying out of Incirlik Air Base, Turkey, but were redirected to Afghanistan in late December, after the U.S.-led coalition cleared out ISIS in both Iraq and Syria, said Hecker, who commands all U.S. airpower in the country.

The warplanes, which are armed with a 30 mm cannon and can carry a payload of 16,000 pounds of munitions, arrived Friday and flew their first missions within 24 hours, he said. They joined an air campaign in Afghanistan that has taken aim at the Taliban narcotics trade since November.

They joined an air campaign in Afghanistan that has taken aim at the Taliban narcotics trade since November. A series of strikes carried out by rockets four other types of aircraft and have destroyed about 30 drug facilities, which military officials say has eliminated more than $20 million in revenues from the insurgents’ war chest — roughly 10 percent of the group’s annual take from the drug trade.

Afghanistan is the global leading producer of poppies, supplying about 80 percent of the world’s opium. Despite more than $8.5 billion in U.S.-funded counternarcotics efforts in the country in more than a decade, production is on the rise. In 2017, a record of almost 10,000 tons of opium was produced, according to a joint survey conducted by the United Nations and the Afghan government.

“The Taliban still has not felt the full brunt of American and Afghan air power,” Hecker said in a statement. He is commander of 9th Air and Space Expeditionary Task Force—Afghanistan and NATO Air Command—Afghanistan. “With the arrival new air assets and the growing capabilities of Afghan pilots, the Taliban will have a constant eye toward the sky,” he said.

Before the drawdown of U.S. and NATO troops from Afghanistan in 2014 — which at their peak numbered nearly 140,000 — dozens of coalition jets regularly bombed guerrilla forces throughout the country. They included U.S. A-10s and F-16s, French Mirage 2000s, and British and German Tornados.

The Afghan air force began flying A-29 Super Tucano light attack planes and MD-530 helicopters about two years ago. They have now incorporated the attack aircraft into daily operations, along with C-208 and C-130 transports and Mi-17 helicopters, officials said.

Super Tucanos, aided by their own tactical air controllers on the ground, recently conducted their first strikes against targets of opportunity in support of ground forces maneuvers last month as government troops fought to retake the district center of Marjah in Helmand province.

“The success of the air force is key to tipping the battlefield in favor of (government forces),” said Maj. Gen. Mohammad Shoaib, commander of the air force, in a statement. “The Afghan air force is success-fully fighting and growing, at the same time increasing attack capabilities while delivering daily blows to the Taliban.”

Last year saw a dramatic rise in airstrikes, beginning shortly after President Trump’s inauguration in January. In August, Trump announced that he would give commanders greater strike authorities as part of his strategy for the region.

Despite a pace of airstrikes more than double that of 2016 already last summer, the tempo increased even more on the months that followed Trump’s announcement, with more strikes racked up in 2017 than in the two previous years combined.

Along with the increase in airstrikes has come heavy civilian casualties, the U.N. said last month. Critics of the U.S. bombing campaign say it could lead to blowback from the increasing noncombatant death toll.