A 100-mile stroll through the Netherlands 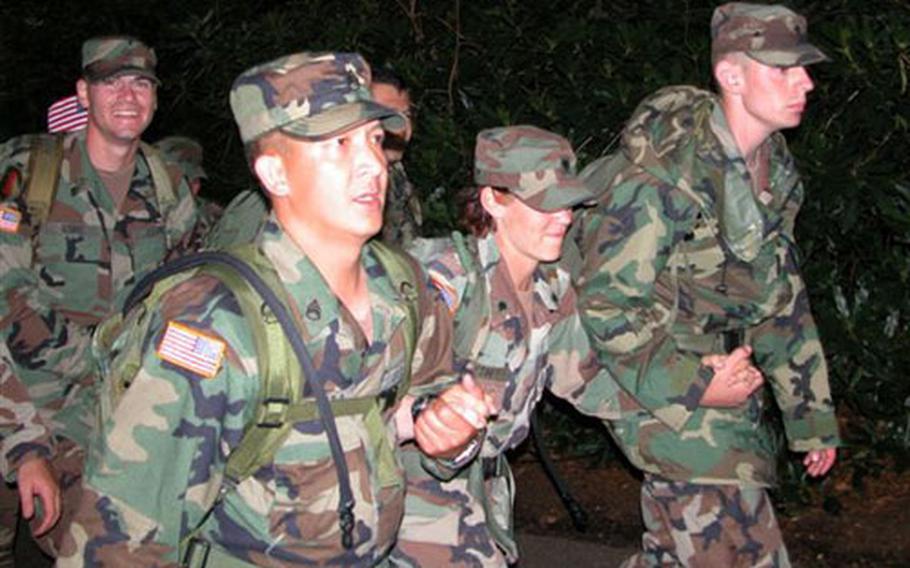 Spc. Mary Smyth of the 7th Signal Brigade out of Mannheim, Germany, gets some help from fellow U.S. soldiers Thursday during the final military portion of the International Four Day Marches in Nijmegen, Netherlands, as they head toward the Camp Heumensoord gate. (Jessica Inigo / S&S) Soldiers from 11th Signal Detachment, 43rd Signal Battalion from Mannheim, Germany, set off from Camp Heumensoord in the Netherlands around 5:30 a.m. Tuesday for an extended hike. (Rick Haverinen / U.S. Army)

The silver lining on that troop&#8217;s black cloud really ended up being black clouds. Marchers were spared scorching summer temperatures and instead made the march in cool weather and mild drizzle nearly every day.

Another silver lining was the crowds gathered along the route, and it was an especially spunky crowd for the final leg of the event Friday. When military members passed through the parade at the end of the march, they were handed flowers. Everyone alongside the road sang, cheered and danced. The fest included barbecues, live music and flowers &#8212; mainly the gladiola, because of its history with the march.

Nijmegen, which also is celebrating its 2,000th anniversary as a city, has strong roots with the flower, according to the Dutch people. It was used as a tribute to victorious warriors as they came home from battle.

The modern-day soldiers who hobbled to the finish line said it felt just like a victory, and the flowers really hit the spot.

&#8220;It was a great experience, and the people really made it special. This is the last time I&#8217;ll be doing this, though. Once is enough,&#8221; said Tucker as he lay under an Army poncho, resting before hitting the final reviewing stand. Other troops, some who said an after-march beer is really what hits the spot, could be seen almost prancing, all but giving in to foot pain, weak knees and ankles.

Suddarth had only one week to train for the event, since he took the slot of another solider who had left his Kaiserslautern, Germany, team. He just happened to be in Germany for leadership training, in which he shadows an Army lieutenant for a month.

This year&#8217;s event drew about 47,000 servicemembers and civilians. The military members, each carrying a loaded rucksack, walk a 40-kilometer route each day.

Near the end Friday, as military members checked into a large field known as Charlemagne to rest before hitting the parade, each was given an individual marching military award. They also received a team award, if they marched with a team.