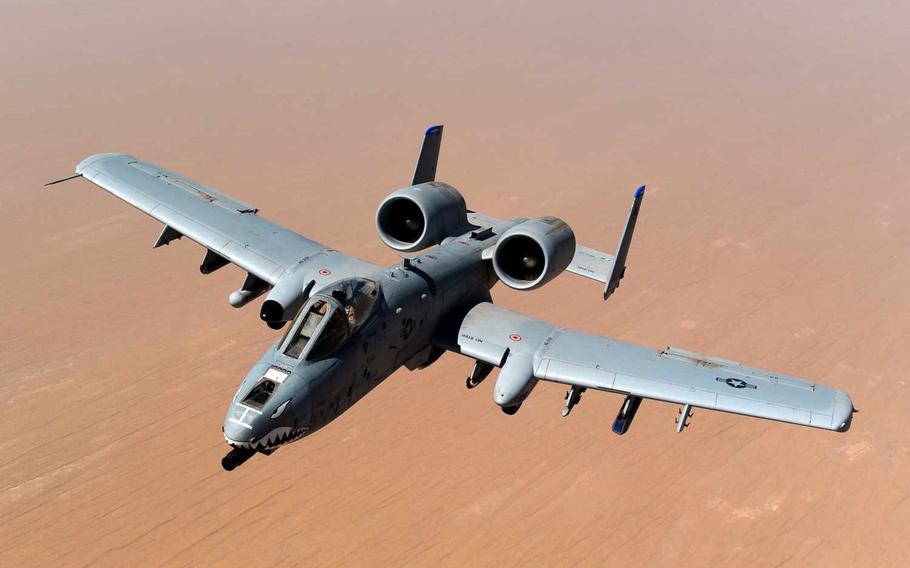 An A-10 Thunderbolt II returns to mission after receiving fuel from a KC-135 Stratotanker, 340th Expeditionary Air Refueling Squadron, over the skies of Afghanistan, May 8, 2011. Twelve so-called Warthogs have been deployed to Incirlik Air Base, Turkey, to conduct strikes against Islamic State targets in Syria and Iraq. (William Greer/U.S. Air Force)

KAISERSLAUTERN, Germany — Twelve A-10 Thunderbolt II attack planes have been deployed to Incirlik Air Base, Turkey, to conduct strikes against Islamic State targets in Syria and Iraq, according to Pentagon and Air Force officials.

“Literally, I got this word as I came in that there are A-10s arriving at Incirlik and this was part of a regular rotation that was planned,” Cook told reporters.

Tech. Sgt. Ryan Crane, a spokesman for U.S. Air Forces in Europe–Air Forces Africa, said Wednesday the aircraft arrived sometime last week. The planes are from Moody Air Force Base in Georgia but were already deployed overseas at an undisclosed location in southwest Asia when they were “repositioned” to Incirlik, Crane said.

The A-10s will replace six F-16s deployed from Aviano Air Base, Italy, since early August to support operations against the Islamic State. Crane said the aircraft would return to Italy soon.

At a press briefing Wednesday, the Pentagon emphasized that replacing the six F-16s, which have an air-to-air mission and are capable of dropping large munitions on enemy air defenses, with the 12 A-10s, which are better known for their close ground support role, did not signal a change in tactics in the U.S. and coalition air campaign in Syria.

“These A-10s are replacing some F-16s that were rotating out. There is nothing special or magical about the actual platform. It’s the ability to conduct strikes. A-10 is just another platform,” said Col. Steve Warren, spokesman for Operation Inherent Resolve.

There’s “no adjustment to the tactical situation,” Warren said. “There are no additional requirements for capabilities or drop in capabilities.”

The A-10, a Cold War-era plane, known by its nickname the Warthog, is being steadily employed overseas, even as the Air Force proposes to retire its fleet of about 285 A-10s over the next four years. The service says mothballing the single-role A-10s will save an estimated $4.2 billion a year and free up maintainers for the F-35 Joint Strike Fighter, a multirole, stealth fighter and the military’s most expensive aircraft in history.

The A-10s were thrown into the fight against the Islamic State for the first time in November, when a squadron-size element from the Indiana National Guard deployed to an undisclosed location in southwest Asia in support of Operation Inherent Resolve.

Gen. Hawk Carlisle, Air Combat Command commander, told reporters in February that the A-10 had been involved in a “few dozen” missions in Syria but that its use was limited because the warplane is more vulnerable to fire from the ground than other aircraft such as the F-16. The slow, low-flying plane is designed to attack tanks, armored vehicles and other ground targets while conducting close-air support missions.

Last month, 12 A-10s, also from Moody, arrived at Amari Air Base, Estonia, for the first stop in a deployment to Europe that’s expected to last for about six months. The deployment is a security measure in response to the continuing crisis in eastern Europe over Russia’s hostile actions in Ukraine.