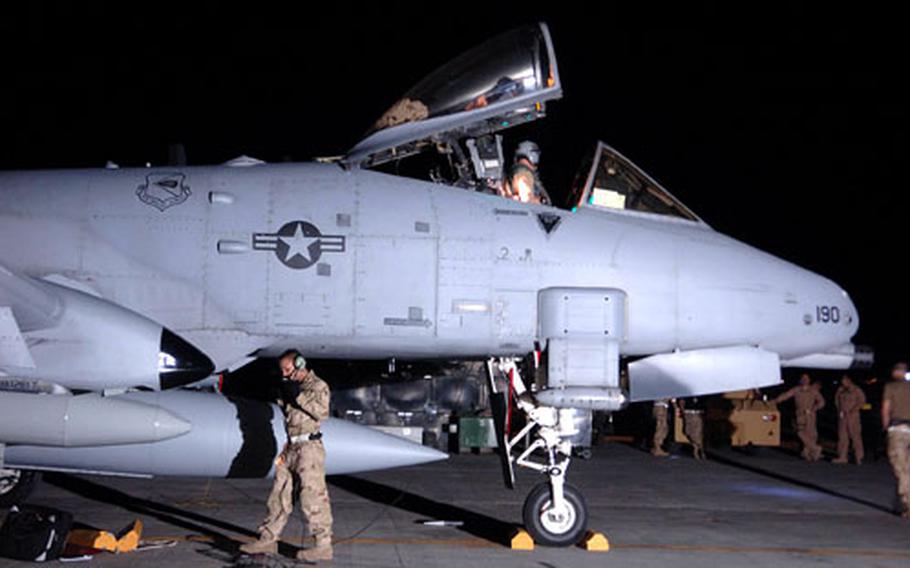 An air crew waits to greet the pilot of an A-10 following its arrival at Bagram Airfield in Afghanistan on Tuesday. The squadron of A-10s adds a second fighter squadron to the 455th Air Expeditionary Wing. (Courtesy of U.S. Air Force)

A squadron of A-10 Thunderbolt IIs arrived this week in Afghanistan, adding muscle to the support of U.S. and coalition ground forces.

Troops on the ground are facing increasingly aggressive insurgents who on Tuesday blasted a U.N. convoy with a roadside bomb in Kandahar and attacked police posts in coordinated strikes near Kabul, according to The Associated Press.

The A-10 twin-engine jets, which arrived Tuesday, add a second fighter squadron to the 455th Air Expeditionary Wing, according to a news release issued by the Combined Joint Task Force-82 Combined Press Information Center.

A-10s rotated out of Bagram in January and were replaced by F-15Es, which officials say provided an edge during winter months. The newly arrived A-10s join F-15Es already there.

The A-10s come from the 354th Fighter Squadron at Davis-Monthan Air Force Base in Arizona.

They can carry bombs and air-to-ground rockets and are equipped with a 30 mm cannon that can fire 3,900 rounds per minute.

The aircraft can survive a direct hit from armor-piercing projectiles. They also have updated defenses including self-sealing fuel cells protected by foam and manual flight controls that can serve as backup in case of hydraulic failure, officials say.

&#8220;The aircraft can be a challenge to maintain because it&#8217;s a 20-plus-year-old plane, but our guys work hard to keep them ready to go,&#8221; said Air Force Capt. Kevin Koren, the 354th Aircraft Maintenance Unit officer in charge.