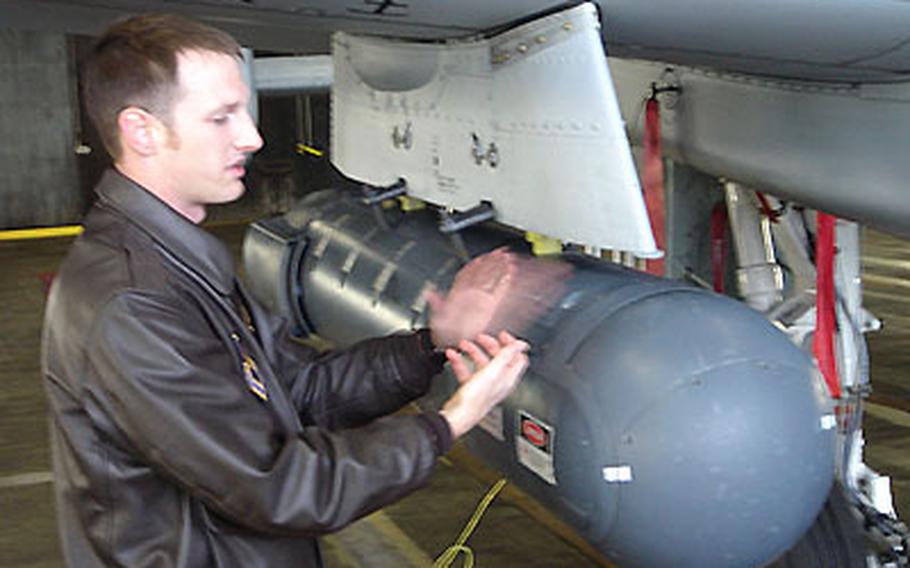 1st Lt. Stephen Bowen, with the 81st Fighter Squadron out of Spangdahlem Air Base, Germany, shows a new targeting pod attached to the wing of an A-10 Tuesday. By the time the unit deploys early next year, commanders hope all 18 of the unit&#39;s A-10 aircraft will be equipped with the new technology. (Charlie Reed / S&S)

SPANGDAHLEM, Germany &#8211; Tracking and pursuing enemy forces on the ground should be easier for A-10 pilots with the 81st Fighter Squadron when they go downrange early next year.

By the time they deploy, leaders hope the unit&#8217;s 18 aircraft will be outfitted with new targeting systems. Three already have been installed with six more on the way.

The technology allows pilots to deploy laser-guided munitions, pursue moving targets at night with infrared imaging and stabilize points on the ground while maneuvering. The information is routed from a targeting pod attached under the wing to a monitor in the one-man cockpit. Ground forces also have access to the images coming from the plane.

But Bowen and the other pilots are learning to use the new systems with caution.

It&#8217;s apparently easy to get caught up watching the tracking screen, jokingly referred to as the &#8220;drool cup.&#8221; So pilots are learning to strike a balance between using the targeting system and their tried-and-true technique of simply looking out the window.

The unit just got back to Spangdahlem after a seven-week training mission at MacDill Air Force Base in Tampa, Fla. There they worked with the new targeting technology and participated in two close-air support exercises with the U.S. Army, Navy and Marines, and British forces.

The scenarios allowed the unit the rare opportunity &#8220;to integrate with all the different assets,&#8221; said Maj. Mark Lambertsen, the unit&#8217;s second in command.

Built to operate near the front lines, the A-10 can fly at low air speeds and altitude. It can survive direct hits from armor-piercing and high explosive projectiles up to 23 mm. Pilots are protected by titanium armor that also protects parts of the flight-control system.

&#8220;The toughest part is keeping track of all the moving parts to make sure everyone&#8217;s de-conflicted and to maintain situational awareness,&#8221; he said.