A-10 pilots keeping it safe in Afghanistan 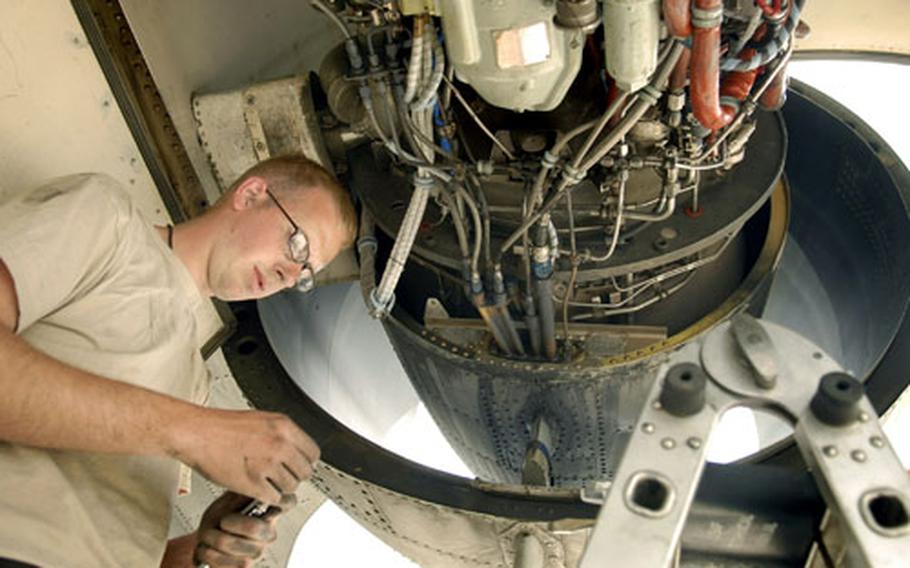 BAGRAM, Afghanistan &#8212; A 200-pound bomb dropped from a U.S. warplane can end a firefight in a heartbeat. That same bomb, however, slightly off target, can be tragic for troops on the ground.

The margin of error, the difference between helping allies and making a horrific mistake, is microscopically thin for pilots thousands of feet in the air. Bad judgment, poor communication or both can alter fate in seconds.

Pilots with the Spangdahlem, Germany-based 81st Fighter Squadron know the risks all too well.

When the squadron last deployed to Afghanistan in 2006, a pilot mistook a trash fire and strafed a group of coalition troops battling Taliban forces. The strike killed a Canadian soldier and injured dozens, putting greater scrutiny on how American pilots try to avoid fratricide.

In February, when the 81st returned to Afghanistan, they arrived better prepared to avoid a similar tragedy, said the unit&#8217;s commander Lt. Col. Timothy Hogan. But as the unit&#8217;s four-month deployment ends this month, the friendly-fire incident has loomed as a stark reminder of how easily things can go wrong.

"Until your replacements are here and until your job is done, my guys are staying keenly focused on the mission," Hogan said, "because it&#8217;s life or death."

While the squadron left Germany with improved equipment and training, there continue to be challenges in delivering close-air support, or CAS.

There are not enough Air Force controllers on the ground to meet the need, and some allied countries don&#8217;t have any. While some controllers are carrying the newest and latest equipment, many NATO countries do not.

The Sept. 4, 2006, friendly-fire incident happened just days before the squadron was to return to Germany. When the investigation came out, Hogan sat the pilots down, reviewed the tapes, talked about the situation and about how to avoid a similar mistake in the future.

Providing close-air support for soldiers is the squadron&#8217;s main mission here, and it is the specialty of the jet they fly &#8212; the A-10 Thunderbolt II. Before arriving at Bagram, pilots trained for a month in Nevada and for a month in Florida.

Maj. Brett "Mirv" Herman has 16 years in the Air Force, but this is his first time in Afghanistan. He arrived expecting to drop bombs and fire the A-10&#8217;s gun with the frequency of a video game. That hasn&#8217;t been the case. Pilots fired only half as many 20 mm rounds as during the last deployment. But things have gradually intensified with the rise in temperatures.

Herman&#8217;s missions have included guarding coalition convoys and performing screaming flyovers as a "show of force" to scare off Taliban fighters. His most memorable mission occurred when a group of soldiers a few miles outside their base came under attack. Herman provided cover as they sprinted back safely to the base carrying full packs.

"Being here and protecting the ground guys, I wouldn&#8217;t trade it for anything," Herman said. "I like it. Having them feel more secure with me overhead is a good feeling."

While he has only shot his guns once, he discovered how difficult it is to distinguish between friend and foe. "The bad guys, what they do a lot is shoot and scoot," Herman said.

Technology has helped fill in some gaps.

Since their last deployment, the 81st received upgraded radios that are faster and have better sound quality. Their old radios could cut off transmissions sent in "decryption" mode if the sender did not wait several seconds before speaking. For example, a controller could yell, "Hold your fire!" but it might come out "Fire!"

Controllers on the ground also are using a software program that receives streaming video from a camera mounted on the jet. The system &#8212; called ROVER, or Remotely Operated Video Enhanced Receiver &#8212; gives controllers an aerial view and allows them to guide pilots to the target by looking at the imagery.

The controllers used the technology the last time the 81st deployed to Afghanistan, but Hogan said many JTACs didn&#8217;t carry the computers in the field because they were too cumbersome. Smaller computers have made it easier to carry and use.

It is difficult to say whether the newer radios and the use of the ROVER have improved the accuracy and effectiveness of close-air support. But Hogan said both have created a "warm fuzzy" reassurance, adding that the mission is "not so much a science as it is an art."

Laptops and video feeds are helpful, but controllers can&#8217;t always rely on them to do their job.

"We like to learn how to use them and be able to use them in the way they were created to be used," Senior Airman Dan Collins said. "But, in the worst-case scenario, you don&#8217;t want to be the guy who can&#8217;t do his job because his battery died."

Even if a controller does everything seemingly right, it&#8217;s also up to the pilot to make sure he or she delivers the bomb on target. That reliance has created a bond between both JTACs and pilots unlike anything else in the Air Force.

When controllers finish their deployments and return to Bagram to catch their flight back home, many of them make a point to visit the pilots at the squadron. Some visit the pilots to just shake hands and show their appreciation.

BAGRAM, Afghanistan &#8212; If there is one thing he would like to have more of the next time he deploys, Air Force Maj. Brett "Mirv" Herman said the answer would be simple: more JTACs. More airmen on the ground can be the difference.

Joint Terminal Attack Controllers, better known as JTACs, are the link between ground forces and the Air Force pilots above. When shots are exchanged or things get a little hairy, JTACs get on the radio and call upon help from the skies. The A-10 pilots come to the rescue like a 911 force from above.

But the Air Force does not have enough JTACs to go around. Making matters even more complex is the fact that some coalition forces do not use the same tools and tactics. Romanian forces, for example, must depend on U.S. Air Force controllers to provide close-air support in Afghanistan because their military does not have any.

The U.S. Air Force has had a difficult time meeting the need for its own controllers.

JTACs live and work daily with the Army units they support. When the Army unit they&#8217;re attached with deploys, these airmen go with them. But the need is so high that the Air Force has had to draw from other units. The familiarity of living and working with a unit is not the same for those deploying with different units.

"We basically have to pull bodies from a lot of different places just to meet the manning needs," said Senior Airman Dan Collins, a JTAC who supports the 101st Airborne Division in Afghanistan. "We don&#8217;t have as many guys in the career field as we would like to have. We are in demand."

The job can be stressful, and some controllers have trouble handling the stresses of combat. One mistake might not only kill friendly forces; it could take their own.

"When you sit down and you think about what you&#8217;re actually responsible for, sometimes it can be kind of overwhelming," said Collins, who is unsure whether he wants to make the Air Force a career. "Whenever I think about it and it gets stressful or it&#8217;s a lot to take in, I pretty much tell myself to &#8216;sack up&#8217; and do it anyway."