Lance Cpl. Ben Martin operates an excavator on loan from the Seabees. The 9th Engineer Support Battalion from Okinawa recently fortifed the water pump house facility with a perimeter of Hesco barriers to better protect it from insurgent attacks. (Megan McCloskey / S&S)

Lance Cpl. Ben Martin operates an excavator on loan from the Seabees. The 9th Engineer Support Battalion from Okinawa recently fortifed the water pump house facility with a perimeter of Hesco barriers to better protect it from insurgent attacks. (Megan McCloskey / S&S) 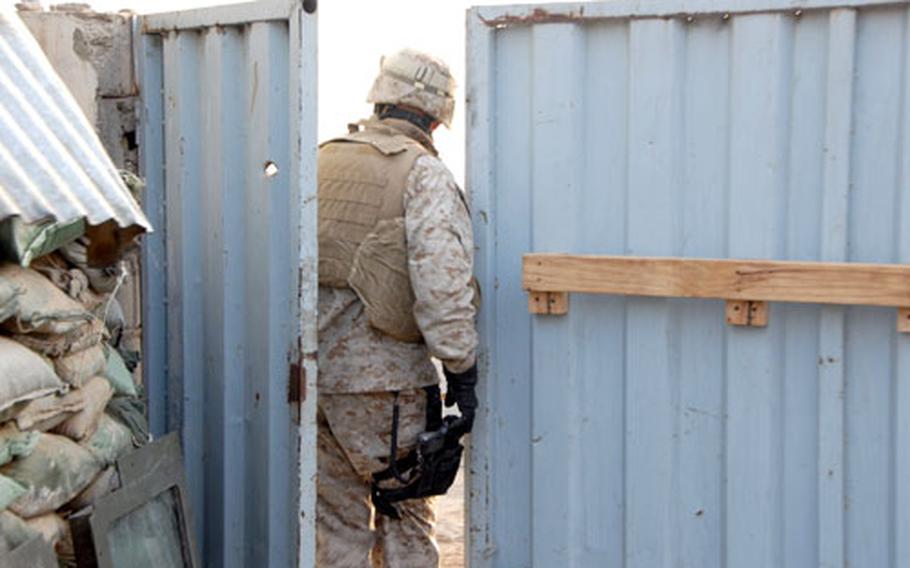 Chief Warrant Officer Bruce Broaddus walks through the gate that used to be the outermost perimeter of defense for a water pump house, before the installation of Hesco barriers and additional access gates. (Megan McCloskey / S&S) 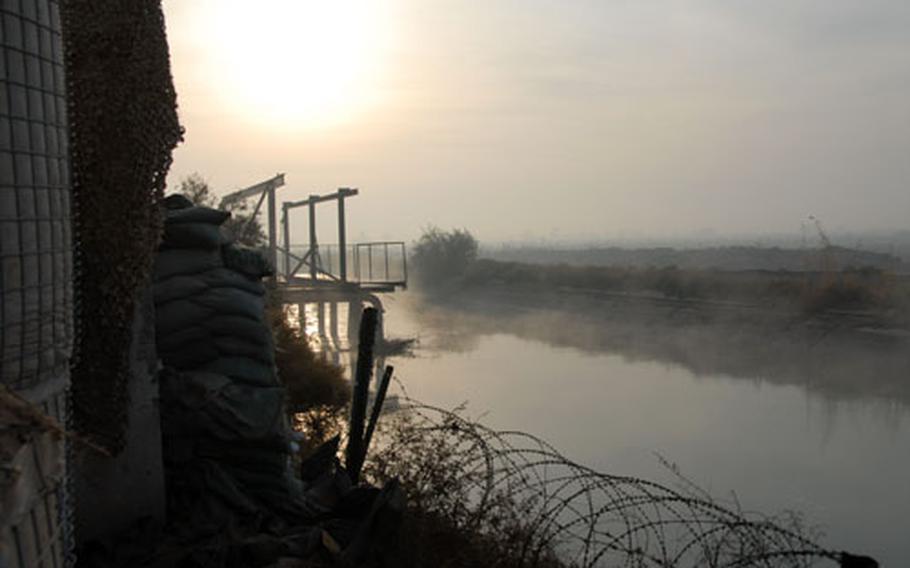 Early-morning fog hangs over the water pump house near Fallujah, Iraq. Ninth Engineer Support Battalion Marines have fortified the pump house compound to protect it from attacks by insurgents, who often pull up on the other side of the canal and launch grenades at the facility. (Megan McCloskey / S&S)

It&#8217;s an apt phrase for much of the work the 9th Engineer Support Battalion does in Anbar province. Fortifying structures, such as the water pump house Spradlin was speaking about, is a key job for the battalion.

The 9th ESB Marines essentially make a structure securer, making it harder for insurgents to attack it, whether it&#8217;s a police station, a guard tower or some other important facility.

Undoubtedly the job involves putting up protective barriers called Hesco &#8212; such a common sight in Iraq these days it&#8217;s often the punch line of jokes.

The water pump house, which pumps water from a canal that&#8217;s an offshoot of the Euphrates River near Fallujah, is a good example of the fortification work the 9th ESB Marines do.

Before they worked at the site, it was pretty much sitting in the open without much protection. Insurgents often tossed grenades at the facility and took sniper shots at the Marines manning the pump house.

The engineers put in a large gate at the entrance with jersey barriers on the road to create a serpentine approach, removed reeds the insurgents used to hide and knocked down a berm that caused a blind spot in the watch towers&#8217; view.

They also put up a wall of Hesco around the entire perimeter, which clearly marks the boundaries of the compound.

The tall Hesco barrier encloses the driveway and parking lot in the front and the burn pit used for trash in the back.