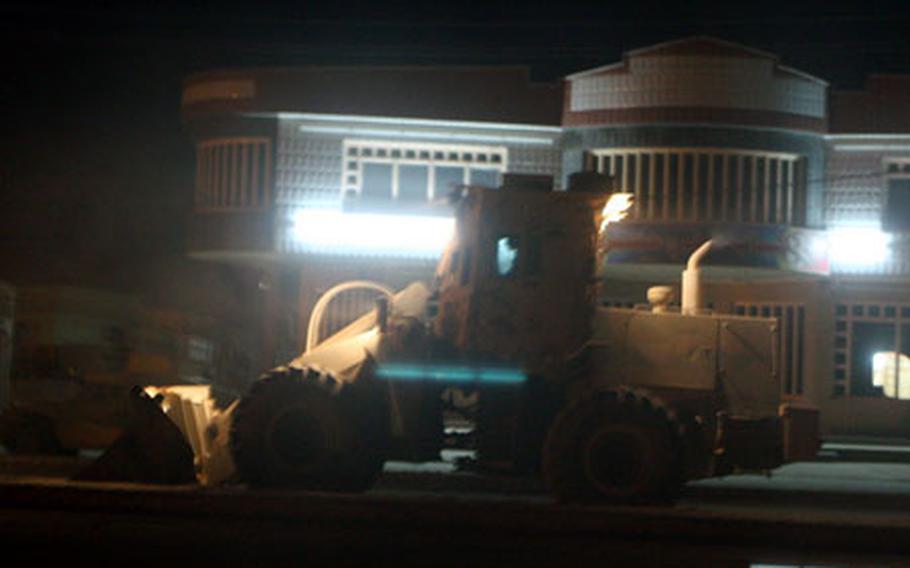 Marines with the Okinawa-based 9th Engineer Support Battalion clean up dirt and trash from the main drag in downtown Fallujah, Iraq. The road was cleared to make it harder for insurgents to plant roadside bombs and carry out other attacks. (Courtesy of the U.S. Marine Corps)

The dangerous main drag through insurgent-infested downtown Fallujah, Iraq, was cleared of three dump truck loads of dirt, rubble and trash during a recent fast-paced night mission &#8212; the first such cleanup on the street.

&#8220;It was definitely intense,&#8221; said Chief Warrant Officer Bruce Broaddus, who headed up the mission for Engineer Support Company, 9th Engineer Support Battalion. &#8220;It was a much different scope than we&#8217;d had before, especially with the buildings and actual big-time streets.&#8221;

The debris piles had been on the street, which is heavily trafficked by both convoys and civilians, probably since the battle for Fallujah a couple of years ago, Broaddus said.

The Camp Taqaddum-based 9th ESB often works around the Fallujah area, but the recent mission was the first time they&#8217;d done work in the downtown area.

Improvised explosives, rocket-propelled grenades and small-arms attacks are common in that part of the city, Broaddus said.

Sgt. Liz Villalobos, a security team leader for the mission, said it was &#8220;a bit of a concern to provide security&#8221; there.

The threat was higher than on some of their other jobs, like the one another support company did in December on a troublesome &#8212; but more open &#8212; area of a four-lane highway that runs from Baghdad to Syria.

Villalobos said the height of the buildings and vehicles approaching from multiple directions were the biggest concerns for security, but &#8220;everything was pretty calm.&#8221;

The main goal of the mission was to reduce &#8220;the amount of places and hideaways insurgents could put [improvised bombs],&#8221; Broaddus said.

They had just four hours to clear three priority spots, which totaled about one kilometer, he said.

The Marines staged the mission at the government center. After the area was searched for roadside bombs, security moved in and street cleanup began.

He said about 250 Marines went to downtown Fallujah for the mission and about 80 were 9th ESB. Many of the others who participated are with Weapons Company, 1st Battalion, 24th Marine Regiment, the battalion that controls the area.