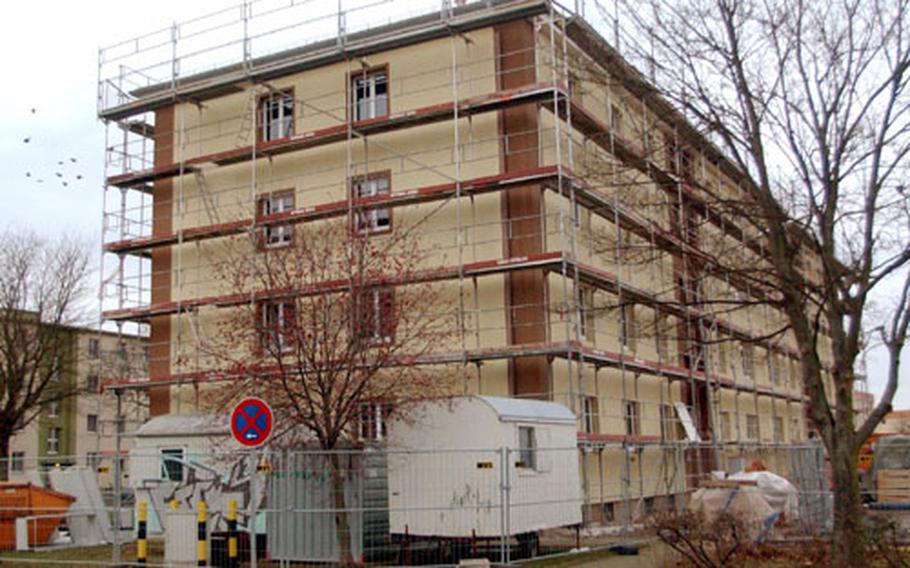 W&#252;RZBURG, Germany &#8212; The W&#252;rzburg-based 98th Area Support Group has put a hold on nearly $270 million worth of future construction projects until the Department of Defense decides the fate of U.S. bases in Europe, ASG officials said last week.

Seventeen of the projects would upgrade single-soldier barracks so that each soldier could live in his or her own room with a shared bathroom and kitchen. In 1996, the Army launched a $9 billion program to upgrade its old-fashioned dormitory-style barracks to the new style &#8212; which DOD calls &#8220;one-plus-one&#8221; &#8212; by 2008. In surveys, soldiers placed solo rooms near the top of their quality-of-life wish list.

Other projects on hold would make wholesale renovations to family housing blocks in Schweinfurt, W&#252;rzburg and Illesheim as well as construct a new shopping center and child development center at Bamberg.

The building freeze is tied to plans for a sweeping &#8220;transformation&#8221; of the U.S. armed forces around the world, announced last spring by senior Pentagon officials.

As part of the transformation Marine Corps Gen. James L. Jones, head of the U.S. European Command, said he wants to close some bases in Western Europe and transfer forces back to the United States or to still-unbuilt outposts in Eastern Europe and Africa.

Some members of Congress have objected to spending money on new or renovated buildings at bases likely to be closed within a few years. While transformation plans lately have been slowed because of logistical, political and financial barriers, Jones pledged to put construction funds only into bases EUCOM intends to keep.

But, Harrison said, the freeze doesn&#8217;t affect about 70 construction projects totaling about $100 million already under way or about to start, Harrison said. These include improvements to four motor pools and two dining facilities in Schweinfurt, apartments in Bamberg&#8217;s Pines housing area, and movie theater upgrades in Illesheim and Schweinfurt. All projects at Katterbach Kaserne also will continue as scheduled.

The hardest-hit programs are the ones to renovate military family housing and single-soldier barracks.

The Army Family Housing Program was begun in 1996 and had been scheduled to continue until 2007. Harrison said the 98th ASG made plans to spend $390.7 million renovating 320 apartment buildings, upgrading kitchens, making apartments larger, and adding bathrooms and laundry rooms. So far 97 buildings have been completed and 30 more are currently under construction. The building freeze affects 48 of 88 apartment blocks that are now in the design phase &#8212; about $71 million worth.

The Barracks Upgrade Program, begun in 1992, aimed to spend $562.5 million to upgrade more than 8,700 barracks rooms in 98 buildings across the ASG to the 1+1 standard. Of those buildings, Harrison said, 38 have been completed and 15 more are now under construction. The freeze affects 17 projects now being designed, but 13 other buildings still are scheduled for renovation before 2008.

One of the projects on hold is Building 182 at Harvey Barracks in Kitzingen, home of Bravo Company of the 701st Main Support Battalion, which had been penciled in for renovation in 2005. The walls, floors and bathroom fixtures show signs of age, though several soldiers who live there say it generally is in good repair. Noncommissioned officers live in solo rooms, and enlisted soldiers sleep no more than two to a room.

The largest delayed project is the $25 million exchange and commissary building at Bamberg&#8217;s Warner Barracks, which had been scheduled for next year.

Currently AAFES stores are scattered across the post in separate buildings. The proposed mall would put them all under one roof.

Harrison said the 98th ASG and the four base support battalions under its umbrella are scrambling to find other sources of money to compensate for some of the lost money. In some cases, they are paying for scaled-back renovations out of their own.