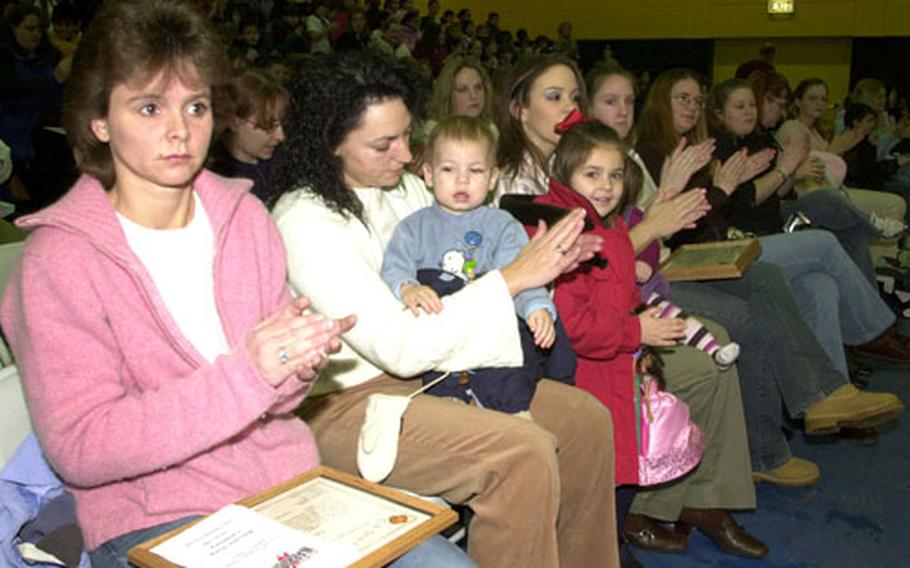 Family members wait for their loved ones during Tuesday morning’s ceremony in which troops from Company A, 94th Engineer Battalion returned to Hohenfels, Germany, following a yearlong tour in Iraq. (Seth Robson / S&S)

HOHENFELS, Germany &#8212; When Company A, 94th Engineer Battalion arrived at Rawah, Iraq, last year there was nothing there.

&#8220;It was just empty desert,&#8221; company commander, Capt. Jim Hoyman recalled at a ceremony Tuesday to welcome back his Hohenfels-based unit from a yearlong Iraq tour.

The 94th was charged with building an outpost for 1,600 soldiers at Rawah that could serve as a base for operations against insurgents crossing the nearby Iraq-Syria border, he said.

&#8220;It was pretty poor living conditions, but it is the type of environment that really builds unit cohesion,&#8221; he said.

When the unit returned to Forward Operating Base Marez in Mosul after two months at Rawah, the larger base seemed incredibly clean &#8212; Germany seems almost too clean to believe, he said.

The unit&#8217;s last mission in Iraq involved convoying from Mosul to Al Asad, south of the Euphrates River.

Another Company A soldier at Tuesday&#8217;s ceremony, Sgt. Andrew Bursik, said it was so hot at Rawah during the summer that soldiers became nocturnal, working at night when it was cooler and sleeping during the day. The 30-year-old Faribault, Minn., native said he noticed many changes in Mosul since the first time he deployed there in 2003 with the 52nd Engineer Battalion out of Fort Carson, Colo.

&#8220;Back then, it was less dangerous, but the living conditions were not as good. This time we had air conditioners in our rooms and two of the best chow halls in Iraq. But the IEDs (improvised explosive devices) were a threat,&#8221; he said.

Bursik&#8217;s wife, Heather, who works at the Hohenfels Community Bank, said she felt sorry for her husband when he was at Rawah but was glad to have him home.

&#8220;While he was away I went to a lot of FRG (Family Readiness Group) meetings. We did gift-wrapping and had barbecues and everyone got together at Christmas,&#8221; she said.

The 94th commander, Lt. Col. Alfred Pantano, 40, of Milford, Mass., praised Company A&#8217;s work at Rawah and also noted other missions taken on by the engineers.

Company A also joined a task force in Mosul charged with eliminating potholes in which insurgents were laying IEDs.

&#8220;This company neutralized the craters to prevent the enemy using them for IEDs and saved numerous American and Iraqi lives,&#8221; Pantano said.