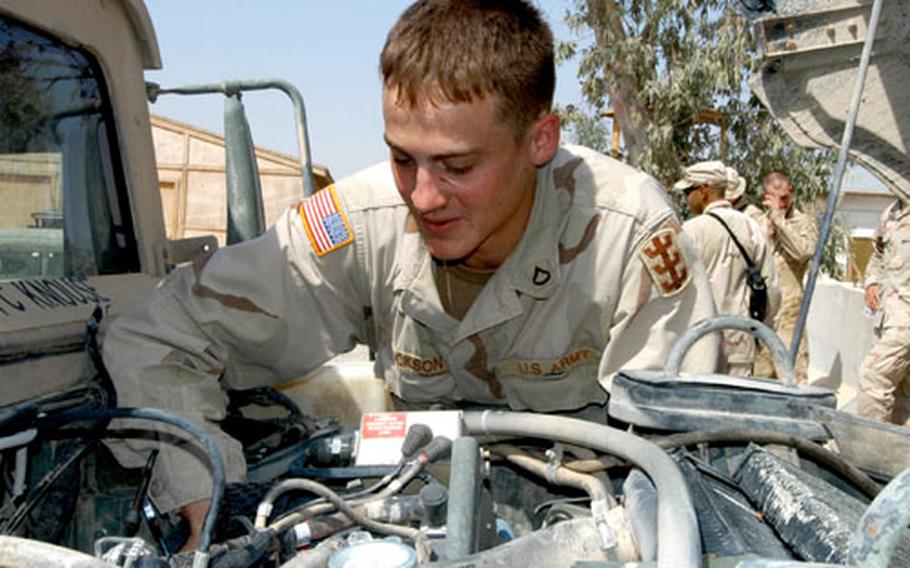 Pfc. Todd Jackson, Headquarters Support Company, 94th Engineer Combat Battalion (Heavy), performs maintenance on a Humvee on Sunday at Forward Operating Base Marez in Mosul, Iraq. The 94th is tasked with doing a lot of construction in the city of Mosul and outlying areas during its seven months in Iraq. (Rick Emert / S&S)

Pfc. Todd Jackson, Headquarters Support Company, 94th Engineer Combat Battalion (Heavy), performs maintenance on a Humvee on Sunday at Forward Operating Base Marez in Mosul, Iraq. The 94th is tasked with doing a lot of construction in the city of Mosul and outlying areas during its seven months in Iraq. (Rick Emert / S&S) 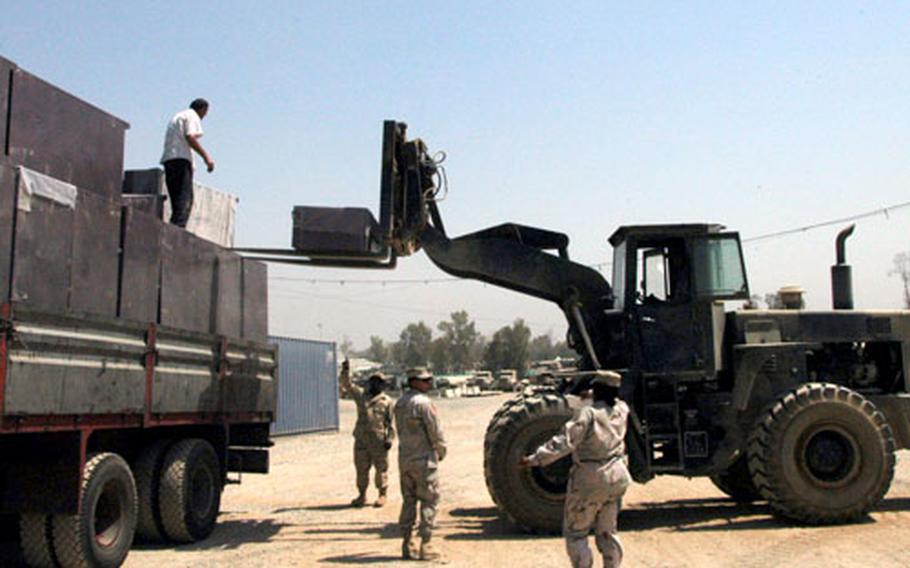 MOSUL, Iraq &#8212; With the ability to construct buildings and excavate land, the 94th Engineer Battalion seemed like the ideal choice for the mission at hand &#8212; to improve forward operating bases in northwest Iraq.

But by the time the unit arrived, the mission had changed.

Instead of making life better for soldiers on the bases, the 94th Engineer Combat Battalion (Heavy) has spent its first seven months in Iraq doing much of its work outside the wire.

The battalion, along with the 535th Engineer Company (Combat Special Equipment), deployed in January from Vilseck, Grafenw&#246;hr and Hohenfels, Germany. Since then, it has been creating outposts and improving the outlying areas near Forward Operating Base Marez in the city of Mosul.

Late last year, the insurgents set their cross hairs on the budding infrastructure in Iraq by attacking contractors on U.S.-funded construction projects, on Iraqi law enforcement personnel and on government officials.

With Iraqi construction crews driven away from vital projects in the city, the 94th soldiers were forced to take their dozers and tool boxes outside the gate, said Maj. Michael Kinard, battalion executive officer.

Much of that work has involved building command outposts and traffic-control points to the city, as well as beefing up the force protection at police stations and government buildings.

&#8220;Our primary mission was and still is to enable the Iraqi security forces,&#8221; Kinard said.

Throughout Operation Iraqi Freedom, Mosul has been one of the hot spots of insurgent activity. For soldiers from the 94th to be able to work on their projects, the unit had to adapt its equipment and work schedule.

Construction crews working outside the gate start at night after the curfew for Mosul residents. Additionally, the battalion established a &#8220;chop shop&#8221; &#8212; a group of specialists who design and install armor for the unit&#8217;s large equipment such as dump trucks, cranes and bulldozers.

But it&#8217;s not the construction sites themselves that pose the greatest risk.

In addition to projects near Mosul, the battalion has improved the command outpost in Sinjar and built one in Rawah. Both cities are west of Mosul and close to the Syrian border where some of the insurgency&#8217;s foreign fighters are suspected to be coming from.

Other continuing and upcoming projects include repairing potholes to limit hiding places for roadside bombs and assisting with upcoming referendum and national elections, Kinard said.

The 94th soldiers, although spread out over northwest Iraq, seem to be coping well with the intense and numerous missions.

Based at nearby Q West, known as Key West to the soldiers based there, the 94th&#8217;s Pvt. Mary Jane Reid said she puts the deployment into perspective to help her get through her year in Iraq.

&#8220;I feel lucky to experience this as opposed to how some of the [soldiers] in our unit had it during Operation Desert Storm,&#8221; she said of the current morale builders like Internet cafes, air conditioned living areas and dining facilities. &#8220;Things are better for us now, and I have my platoon that is like a big family. Sometimes it sucks, but you get through it.&#8221;