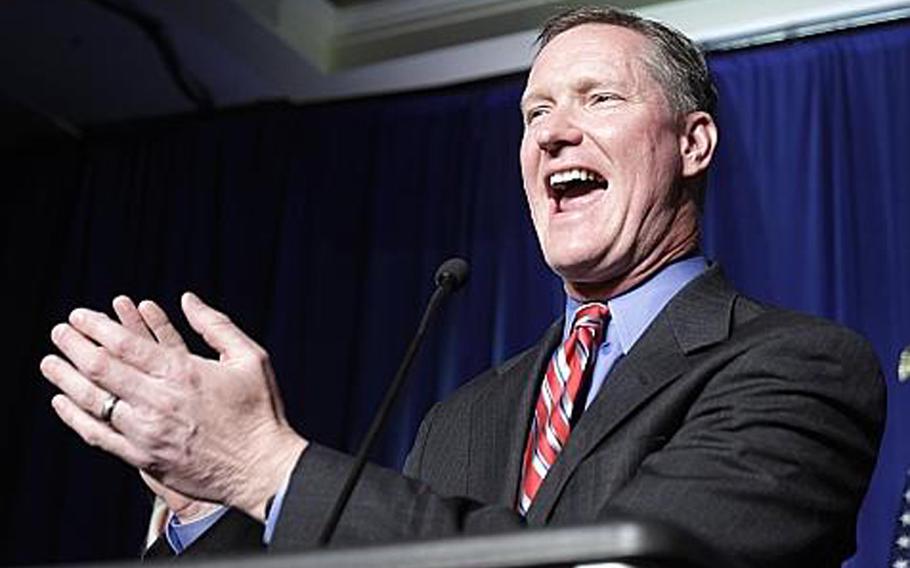 WASHINGTON &mdash; The number of veterans in Congress with first-hand experience of the current wars will more than double next year, after voters backed a slate of new Republican veteran candidates Tuesday night.

Murphy, first elected in 2006, was a vocal opponent of the Iraq war during his first term and led House efforts to repeal the military&rsquo;s &ldquo;don&rsquo;t ask, don&rsquo;t tell&rdquo; law in recent months. On Wednesday morning, gay rights groups and liberal veterans organizations mourned his defeat, calling it a key loss for Democrats&rsquo; defense credentials.

His opponent, former congressman Mike Fitzpatrick, focused little on Murphy&rsquo;s military track record and instead on job losses in southeast Pennsylvania. Nationally, 62 percent of voters in exit polls named the economy as their most important issue, while Afghanistan and national security was the top focus of only about 7 percent, according to The Associated Press.

Three other Democratic challengers with military experience in Iraq also lost their bids for Congress. But even with those losses, the Republicans&rsquo; success on Tuesday was more than enough to boost Congress&rsquo; military experience.

In central Ohio, in the district next to Boccieri&rsquo;s, Republican Steve Stivers defeated Democratic Rep. Mary Jo Kilroy in a rematch of their 2008 contest. Stivers, an Ohio National Guardsman, served for nearly a year Iraq, Kuwait and Djibouti in a noncombat role.

Retired Army Lt. Col. Allen West, who two years ago lost an election bid to Democrat Ron Klein, defeated him in their rematch Tuesday. West served in Iraq in 2003 but was forced out of the service in 2004, after a military panel chastised him for coercing an Iraqi detainee during an interrogation by firing his pistol near the man.

He was allowed to retire with full benefits. Although admitting wrongdoing, he was unapologetic over the incident, saying the information could have helped save other soldiers&rsquo; lives.

Kirk, a naval reservist who drew criticism for exaggerating his war record during the campaign, spent two stints in Afghanistan of less than a month each. Still, that brief service is more recent war experience than any other sitting senator except South Carolina&rsquo;s Lindsey Graham, an Air Force reservist who served similar tours in Iraq.

At press time, one race involving an Iraq veteran was too close to call. Marine Corps veteran Jesse Kelly, running as the GOP candidate in Arizona&rsquo;s 8th District, trailed incumbent Democrat Gabrielle Giffords by about 2,500 votes.

Paul Rieckhoff, executive director of Iraq and Afghanistan Vets of America, called the election of so many recent veterans a new opportunity to highlight returning troops' issues to Congress.

"With so many new voices in Washington, there will be a lot of teaching to be done on our issues and the process," he said. "But there is also a tremendous opportunity for new members to start off right as strong leaders for Iraq and Afghanistan veterans."