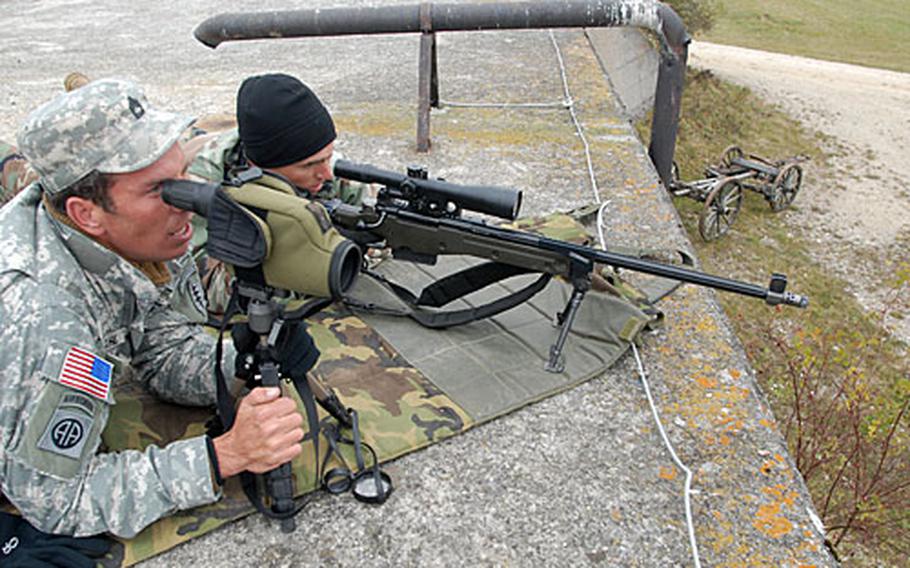 U.S. soldiers participate in sniper training at the International Special Training Center in Pfullendorf, Germany. The school’s goal is to provide unique, multinational military training and reduce the cost of special forces training for its member nations. (Seth Robson / S&S)

U.S. soldiers participate in sniper training at the International Special Training Center in Pfullendorf, Germany. The school’s goal is to provide unique, multinational military training and reduce the cost of special forces training for its member nations. (Seth Robson / S&S) 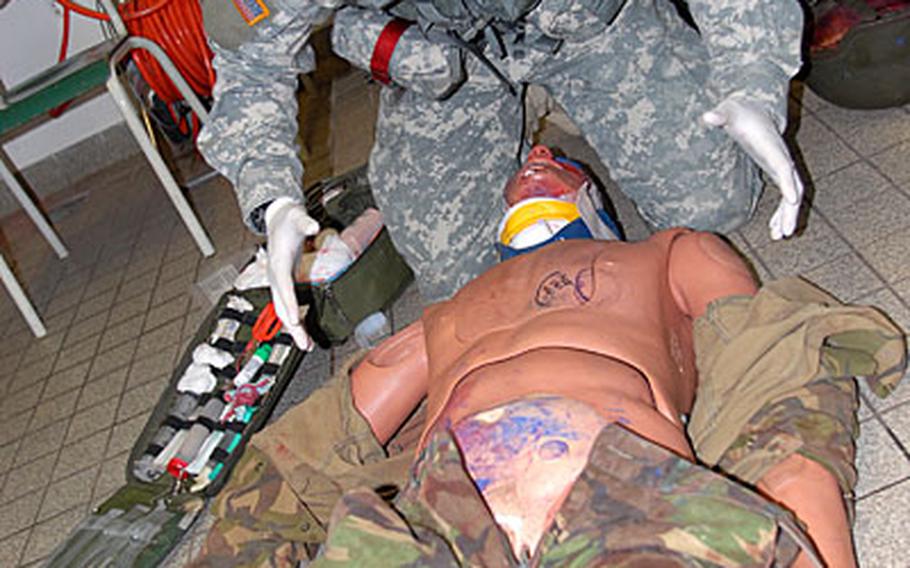 PFULLENDORF, Germany &#8212; The chill of the wind makes temperatures dip below freezing on top of a grassy knoll where U.S. Army Special Forces soldiers are sniping at a far-off target.

But the Norwegian instructor perched on top of the hill appears oblivious to the cold, leaning casually against the howling wind wearing a baseball cap but no gloves as he watches a pair of younger soldiers take turns with the rifles and spotting scopes.

Norwegians&#8217; experience with extreme cold means they bring unique skills to the International Special Training Center &#8212; a U.S.-led school based in Pfullendorf for special operations forces soldiers from nine nations.

The school began in 1979 as a British-led facility called the International Long Range Reconnaissance Patrol School, but the U.S. became the lead nation after Britain withdrew from the school in 2000.

The school aims to provide multinational military training and reduce the cost of special operations forces training for member nations. The member nations are the U.S., Germany, Belgium, the Netherlands, Norway, Greece, Italy, Denmark and Turkey.

Last year, the school taught 10 courses and graduated 259 personnel in Germany and 300 to 400 more at overseas sites visited by mobile training teams, according to Lt. Col. Dave Grosso, the school&#8217;s American commander. Ten of the 46-member staff at the training center are U.S. personnel assigned to the Joint Multinational Training Command.

The students wear a mishmash of different camouflage uniforms, speak with a range of foreign accents and come to the program with varied skills and experiences. Courses are conducted in English, so soldiers must pass a language test along with meeting fitness, swimming and navigation requirements before being accepted, Grosso said.

Capt. Thomas Vouzonis, a Greek instructor who heads the school&#8217;s Survival Division, said interaction between the countries is the biggest benefit to the students.

&#8220;We are supposed to interact with other nations,&#8221; said another instructor, U.S. Master Sgt. Clinton Daniels, 39, of Natchez, Miss. Daniels said special operations forces soldiers learn a lot from each other. For example, he&#8217;s picked up various survival tips from his students such as the Dutch technique of cooking fish wrapped in toilet paper, which pulls off the skin once it burns, or a Turkish method of roasting chicken in a large soup can.

The non-American soldiers joke that they can tell U.S. soldiers by the fact that they all wear Oakley sunglasses, ride Harley-Davidson motorcycles and are twice divorced.

A Belgian student going through the Close Quarter Battle course said one of the best parts of the training is working alongside soldiers from other nations.

&#8220;For example, the Norwegian guys are very good at shooting. I talk to them and they are more into the details so I ask them for tips,&#8221; said the soldier, who asked not to be named.

Each nation has its own rules about special operations forces, and in some cases ISTC staff or students ask that their names and photographs not appear in print.

&#8220;The reason they sent me here is because my team runs a mirror of this course (for everyday soldiers) at JMRC,&#8221; Harris said.

An Italian ISTC officer, who asked not to be named or photographed, said all of the participating nations at the center are trying to evolve their special operations forces to meet changing needs.

&#8220;Everybody now is taking a big risk in Iraq and Afghanistan. Not only [U.S. Army Special Forces],&#8221; he said. &#8220;Traditionally special forces worked behind enemy lines. Now we share the same battlefield with conventional forces, which means there is a big risk of [fratricide],&#8221; he said.

The ever-changing operating environment means the training center has to revise its courses, the Italian officer said.

For example, a course that teaches soldiers resistance to interrogation soon will be relabeled &#8220;conduct after capture.&#8221; Instead of instructing soldiers to withhold information from enemy interrogators, the course will teach them how to behave in a hostage situation where terrorists might attempt to use them for propaganda.

The center&#8217;s executive officer, Greek Maj. Stavros Xenitopoulos, has been involved in special operations forces since 1988. Xenitopoulos, who has extensive experience in airborne operations, joined the training center staff this year and has been known to regale his colleagues with tales of ancient Greeks such as Pericles, the Athenian democratic leader.

&#8220;The costs (at the center) are high, but the quality of the training you get here balances the cost of the student coming,&#8221; he said.

Both Xenitopoulos and his Italian colleague emphasized the importance of special operations forces from all nations getting a chance to work together.

&#8220;The special forces community is really small,&#8221; the Italian officer said. &#8220;It is important to build relationships between nations. This is a small center but it can achieve an important result.&#8221;

The U.S.-led International Special Training Center in Pfullendorf, Germany, is broken down into four divisions:

Combat Survival Course: A three-week course in which soldiers must survive extreme cold and isolation for a sustained period in the field.

Sniper Course: A five-week course in which students learn advanced marksmanship that enables them to take out a terrorist hiding behind a hostage 200 meters away.

Patrol Medical Course: A three-week course that requires no previous medical training and enables soldiers to sustain life in the first few hours after injury.

Patrol Course: A four-week course that teaches soldiers skills needed to conduct ambushes and raids, analyze targets, provide fire support, and insert and extract themselves from the battlefield.

Note: There is also an Operations Planning Course, a one-week course that teaches NATO special forces company- and battalion-level staff officers and noncommissioned officers the fundamentals of operations-planning.