9/11 closure of Mildenhall gate to end 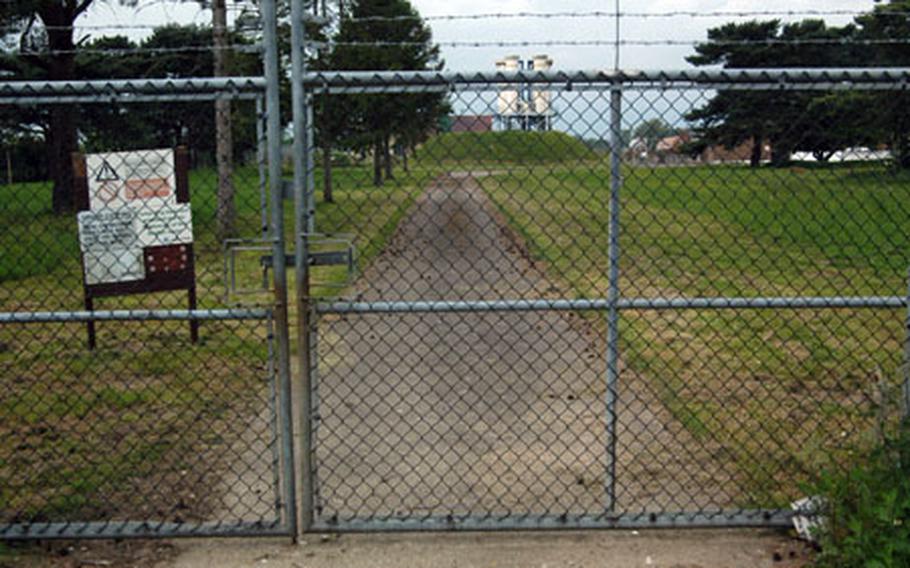 A section of Footpath 28, which runs through part of RAF Mildenhall, has been closed to the public since 9/11. (Ben Murray / S&S)

RAF MILDENHALL, England &#8212; Commuters and residents at RAF Mildenhall will exit the base by a new path starting the second week of June, the result of the first of a number of gate alterations that will change how people access the base.

Base officials plan to open a new &#8220;main&#8221; exit gate at the end of Lincoln Road, adjacent to the Bird in Hand pub along the A1101, said 1st Lt. Matthew Lapham, chief of design and construction for the 100th Civil Engineer Squadron.

The gate will be exit-only for vehicle traffic, but will serve as the main pedestrian entry and exit to Mildenhall, Lapham said.

The gate was closed when base security was tightened after Sept. 11, 2001.

When the gate opens, officials will close Gate 16, also known as St. John&#8217;s Gate. It has been an exit with restricted access near the main entry to the base and often used by commuters on the north side of the Mildenhall airstrip.

The changes are due just six weeks before the reopening of Gate 20, called the Shippea Hill gate, which closed in January for the $350,000 construction of a guard shack and is scheduled to reopen July 31, Lapham said.

Gate 19, the temporary replacement exit opened when construction at Gate 20 began, will be shut down when the guard shack is finished. In the meantime it will maintain the same restricted access hours, Lapham said.

The restrictions mean that, on Sundays, the Bird in Hand gate will be the only exit.

When all work is completed, the Bird in Hand gate will be the primary exit, providing the most direct access to Beck Row, supplemented by rebuilt Gate 20.

The promise of large volumes of traffic returning to their doorsteps has business owners directly outside the Bird in Hand thrilled.

Leanne Mckenzie, a waitress at the Bird in Hand, said the gate&#8217;s opening had been anticipated there for weeks, and workers were looking forward to the revived business potential.

The road that runs past the pub and into the base, Lincoln Road, has been the subject of recent litigation in one of Britain&#8217;s highest courts, where a group called the Ramblers Association challenged the closure of a footpath that ran along the road &#8212; and won.

The Ramblers, a group that organizes walks across the country and campaigns to keep public footpaths open, challenged a 2006 decision by the British Secretary of State for Defence to close Footpath 28, which runs through the base from Beck Row to West Row.

Both the footpath and Lincoln Road were open to the public before late 2001, but where cut off when security was tightened. A justice in London&#8217;s High Court ruled that the Secretary of Defence had improperly granted a closure and failed to ensure a proper alternative was available, according to media reports.

The group doesn&#8217;t want to reopen the path, but is seeking to ensure that the closure of footpaths is performed correctly and that a better alternative is found, said Eugene Suggett, a spokesman for the association.

The Defence office has appealed the High Court&#8217;s decision, a process that could take months.

Likewise, the base, working through the Ministry of Defence, would prefer that public access not be restored for security reasons, said Tom Gill, chief of international relations at the 3rd Air Force, based at RAF Mildenhall.